It’s only been a few years since HyperX entered the gaming keyboard market but since then the company has already released quite a number of models catering to different users.  The latest in the company’s lineup, the Alloy FPS RGB, is a new iteration of its first mechanical keyboard, the Alloy FPS, that keeps the same design of the original but adds full per-key RGB lighting and now uses Kailh Silver Speed switches.

The Alloy FPS RGB also no longer comes with all the accessories the original was packaged with, including the extra keycaps, keycap puller, and soft carrying bag. But with a price tag that’s only a little bit higher than the Alloy FPS when it first launched, the decision to do away with the accessories may have been a way to balance out the price of the new keyboard considering the addition of RGB lighting. 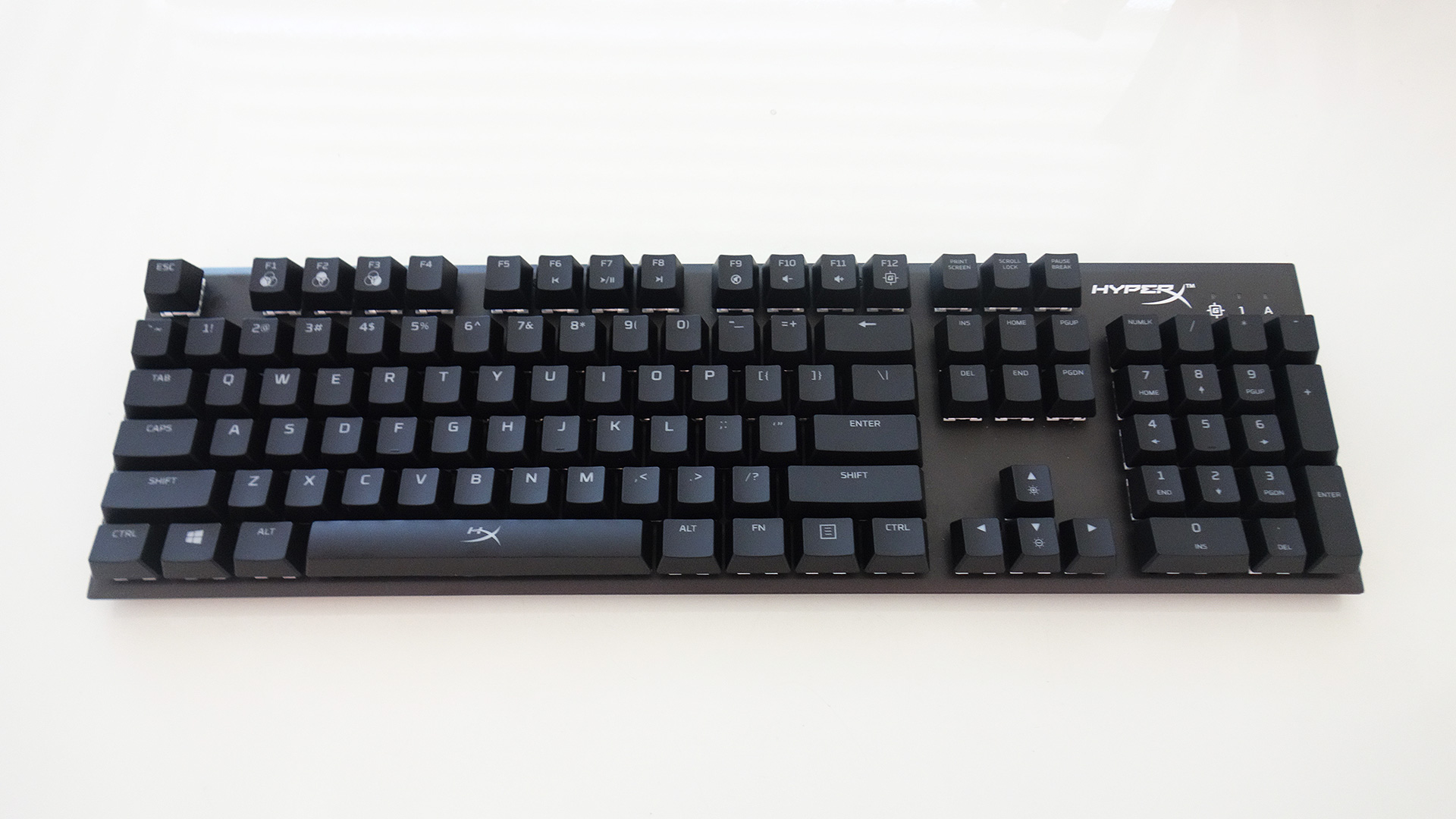 As previously mentioned, the Alloy FPS RGB keeps much of the same all-black, no-frills design as the original, with its thin and compact body, minimal bezels, and raised keys. It also still comes with the same steel frame and plastic bottom and measures and weighs pretty much the same as the Alloy FPS. 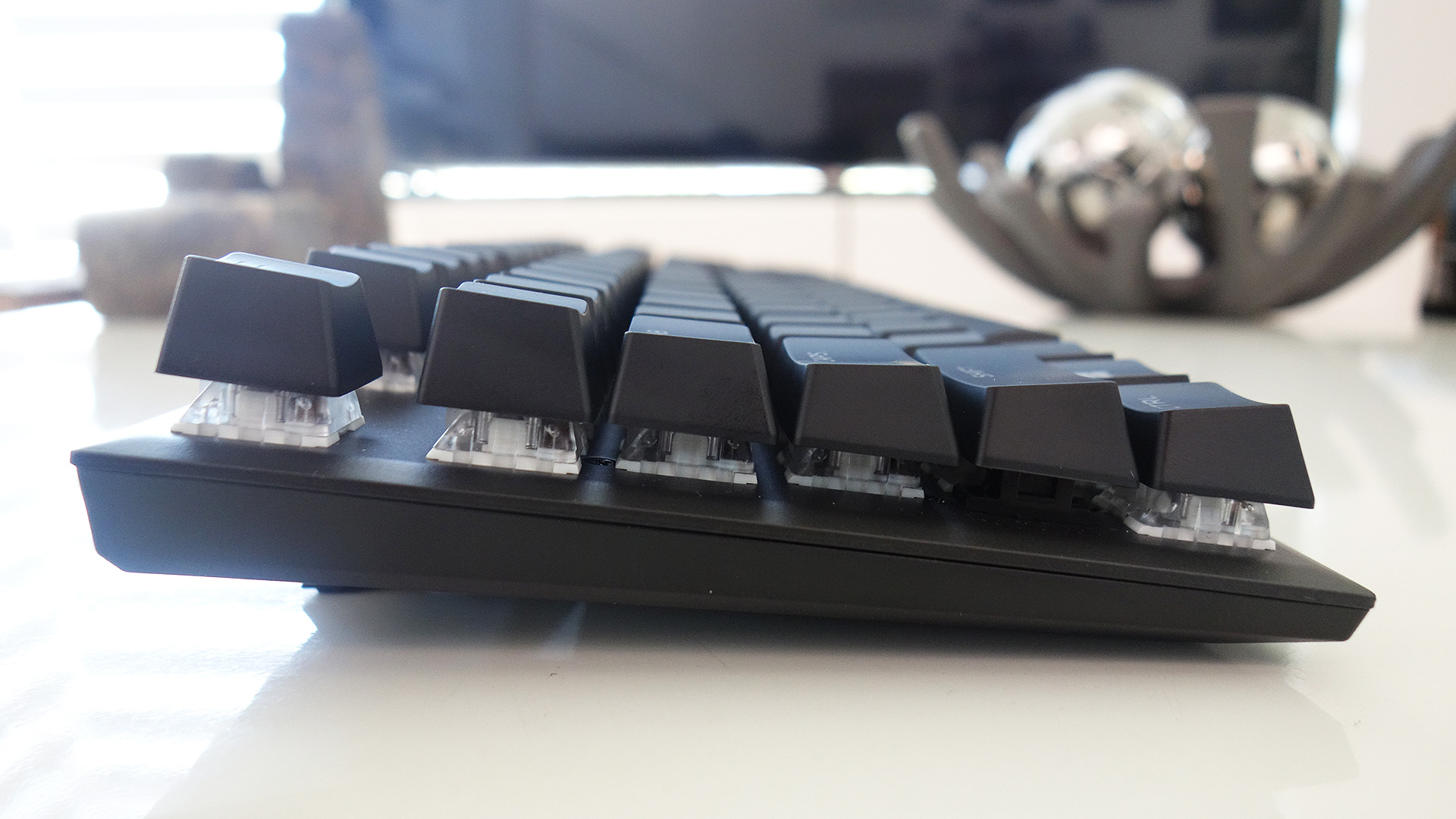 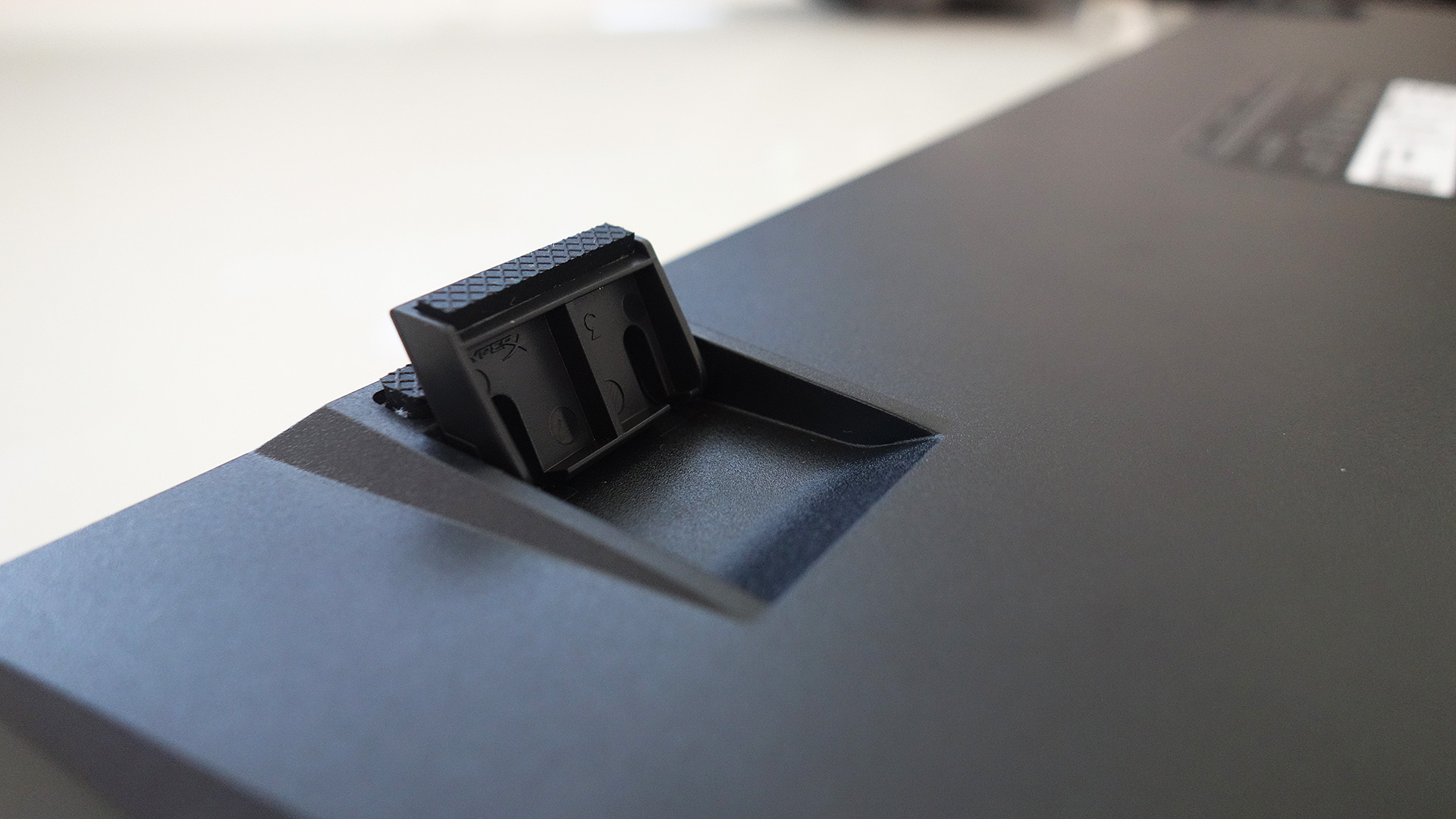 Apart from the keys themselves, the top of the keyboard only features a white HyperX logo and three indicator LEDs for caps lock, num lock, and the game mode, on the upper right of the keyboard. The narrow bezels of the keyboard are chamfered, making the keyboard look even more compact than it is.

The bottom of the keyboard is just as simple as the top, with a flat, matte black surface with four rectangular rubber pads near each of the corners. The two flip out feet only have one height level and each come with their own padding. With the feet folded in, the Alloy FPS RGB slightly slopes upwards towards the rear and flipping out the feet increase the slope slightly. 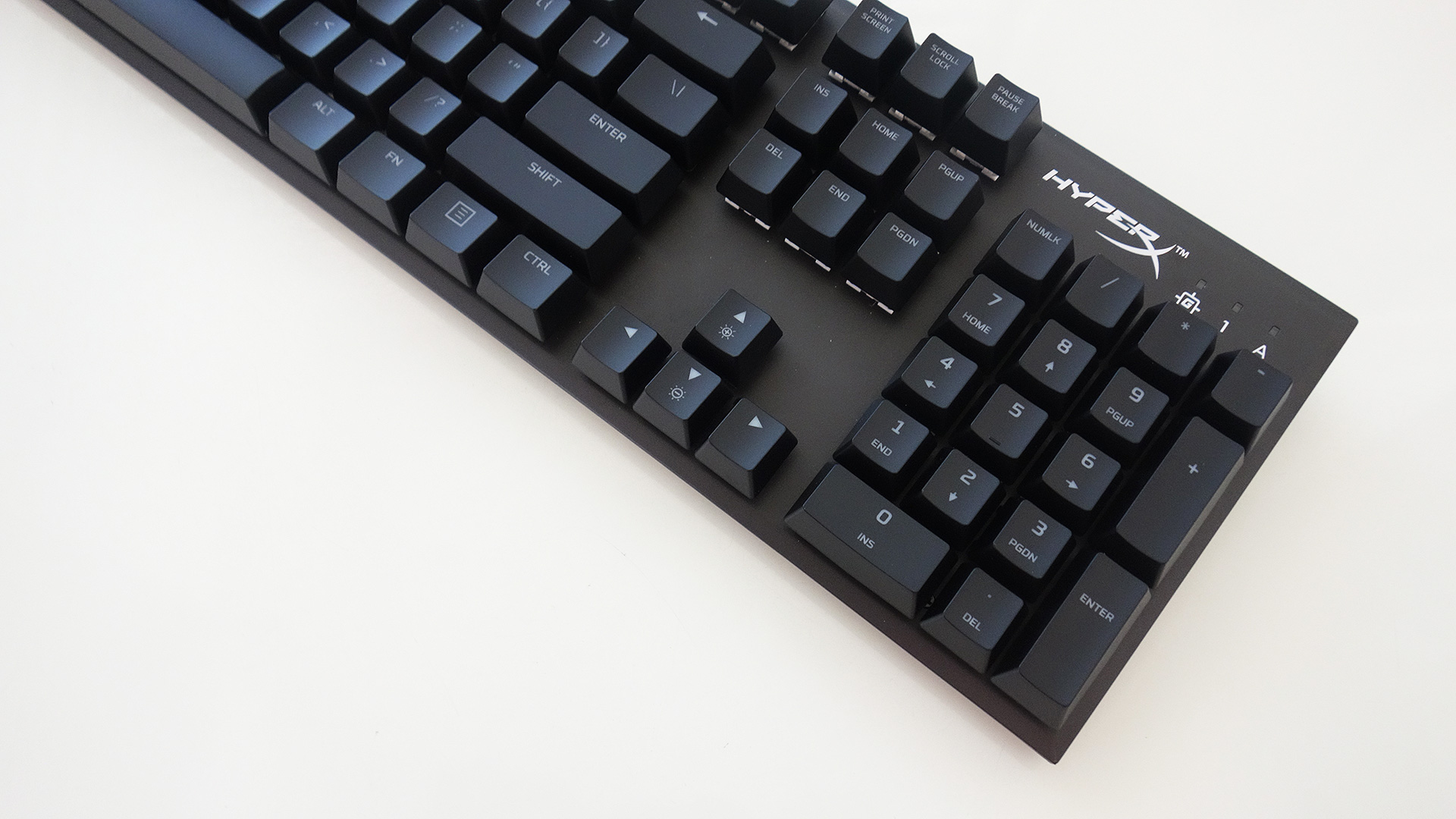 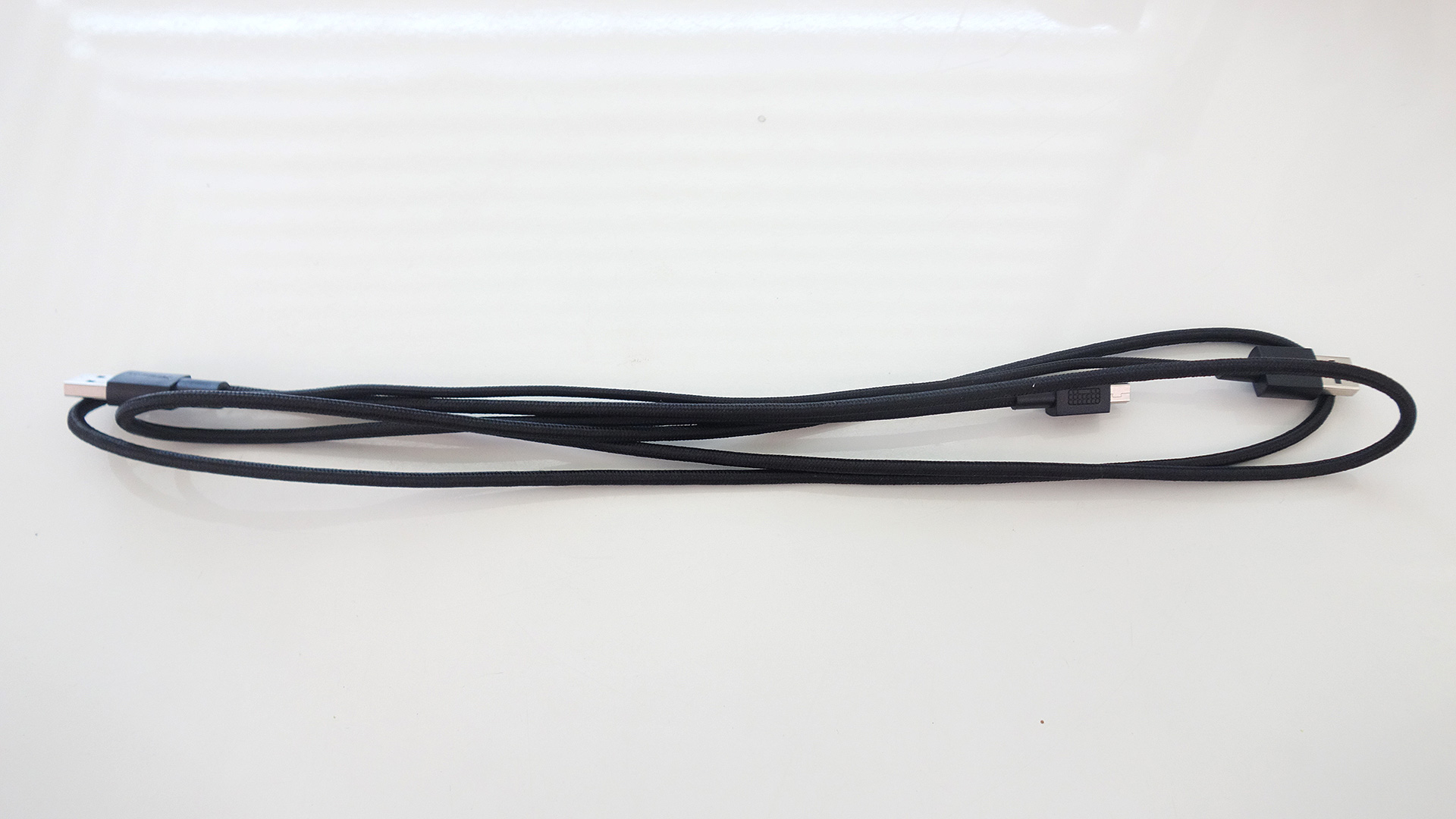 The Alloy FPS RGB features stock ABS, laser-etched keycaps which will eventually become shiny after some time of use. HyperX does offer a set of doubleshot PBT keycaps for those who want to replace the stock ones. The legends of the keycaps are mainly placed at the top center of each with some also containing a secondary legend below it for other functions.

Given its compact form factor, the Alloy FPS RGB doesn’t have the same bells & whistles as its bigger brother the Alloy Elite RGB. There’s no RGB light bar, dedicated media and shortcut buttons, or volume roller. The media keys, volume control, and shortcuts for some of the keyboard’s functions are all set as secondary commands for some of the keys, most of which are located along the row of function keys.

The Alloy FPS RGB only comes with a single USB 2.0 pass-through port that’s only capable of charging mobile phones and can’t be used for peripherals such as mice, headsets, or portable storage. Given that the keyboard’s detachable cable splits into two connectors near the end that both need to be plugged in to use the USB port, it would have been nice to be able to use it as a regular USB port rather than just a charging port. 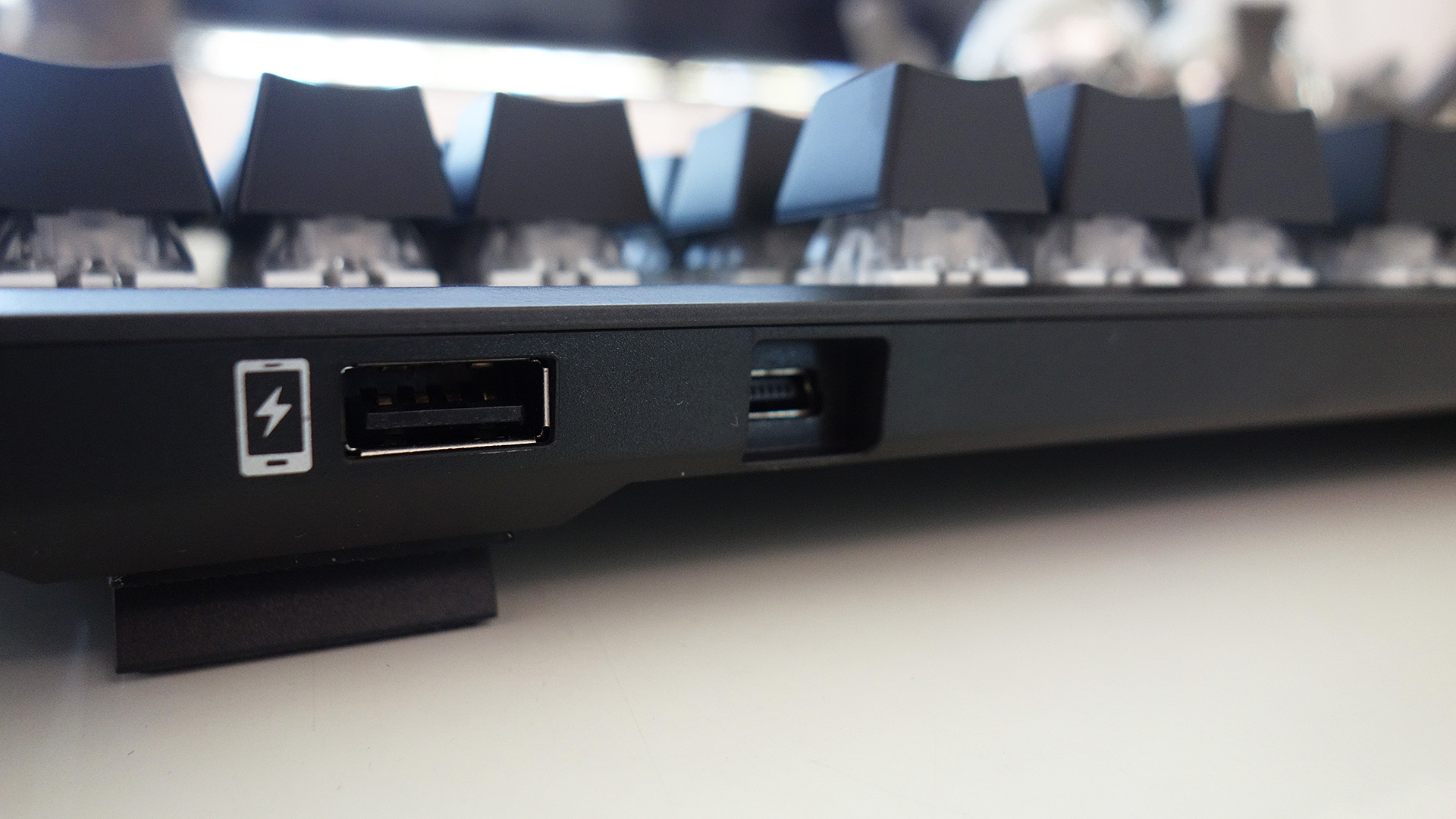 Apart from the new key switches, the other new feature of the Alloy FPS RGB is its full per-key RGB backlighting. The LEDs have five brightness levels and are completely customizable using HyperX’s NGenuity software which allows users to use and customize one of the built-in lighting effects, create and customize lighting zones, or even customize the color of each key. The Alloy FPS RGB is capable of saving up to three profiles in its on-board memory.

The RGB LEDs of the Alloy FPS RGB are separate from the switches and are placed above them to make the light shine brighter through the top-centered legends of the keycaps. The LED placement doesn’t give as much light to the secondary legends though as they’re located near the bottom of the keycap and away from the LEDs. While the difference is slightly noticeable it isn’t incredibly significant. 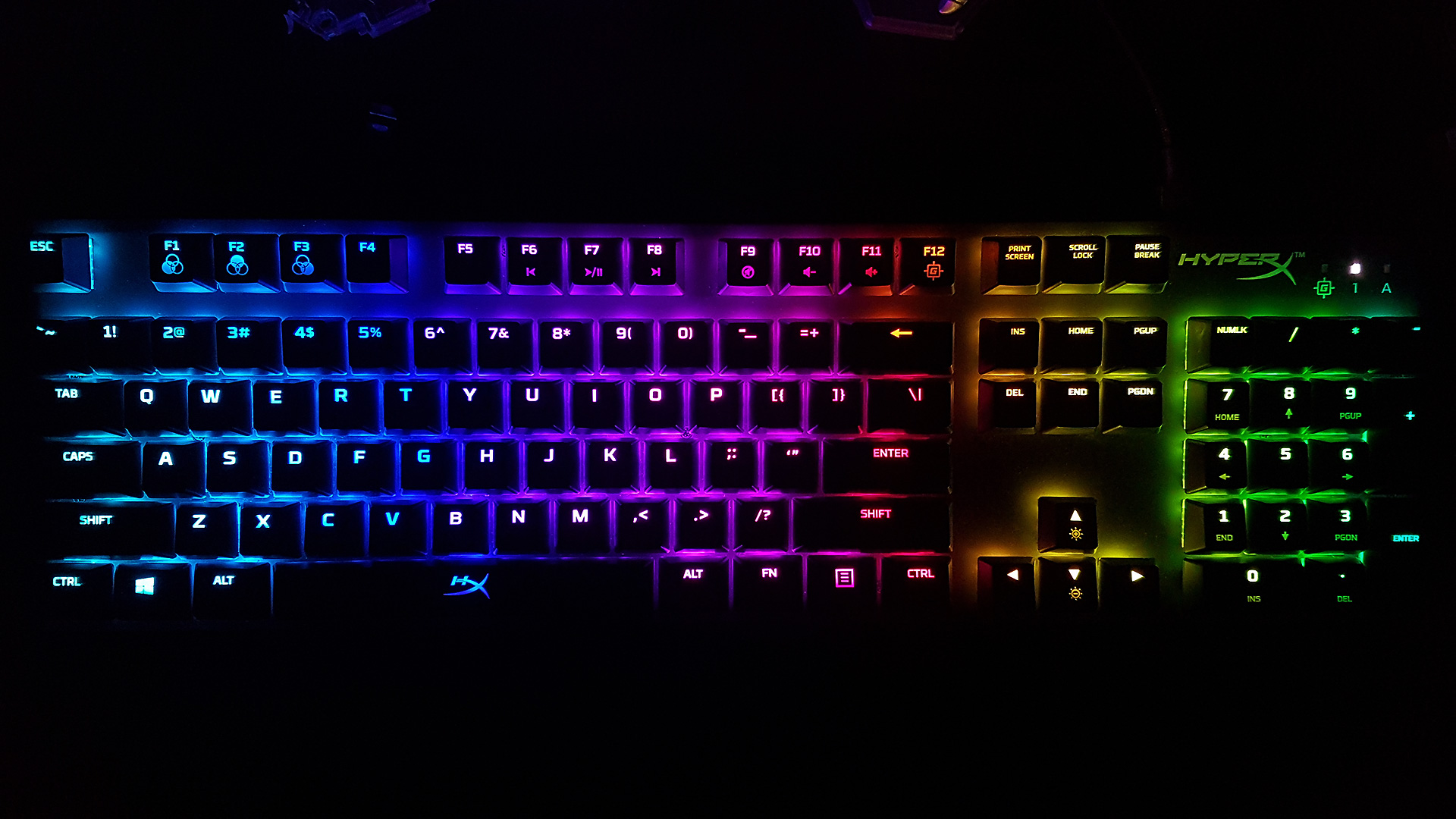 The transparent switch housing coupled with the raised keys lead to a fair amount of backlight bleed around the keys which may be a good or bad thing depending on your preference. The black casing also intensifies the backlight bleed even more in dark environments as the light easily reflects off the surface, giving the keyboard an ambient lighting feel.

The NGenuity features a simple interface that, at first glance, is difficult to understand but HyperX does a great job of implementing a helpful a guide for each of the software’s pages. And once I was familiar with how the interface worked, it then became fairly easy to use. Multiple profiles can be created in the software and either assigned to one of the three slots in the keyboard’s on-board memory or used through the NGenuity software itself. 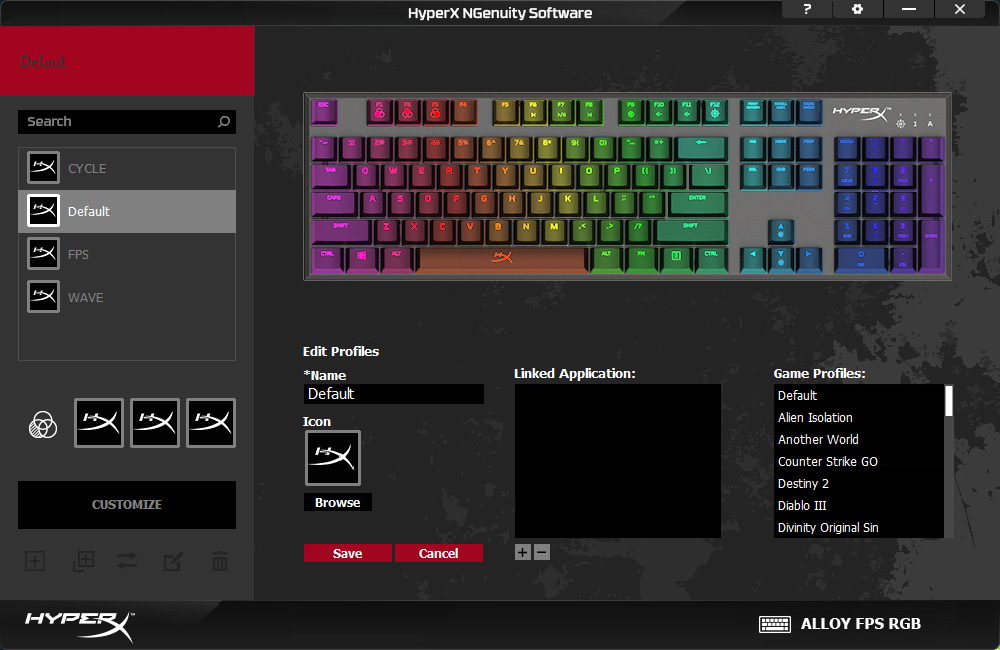 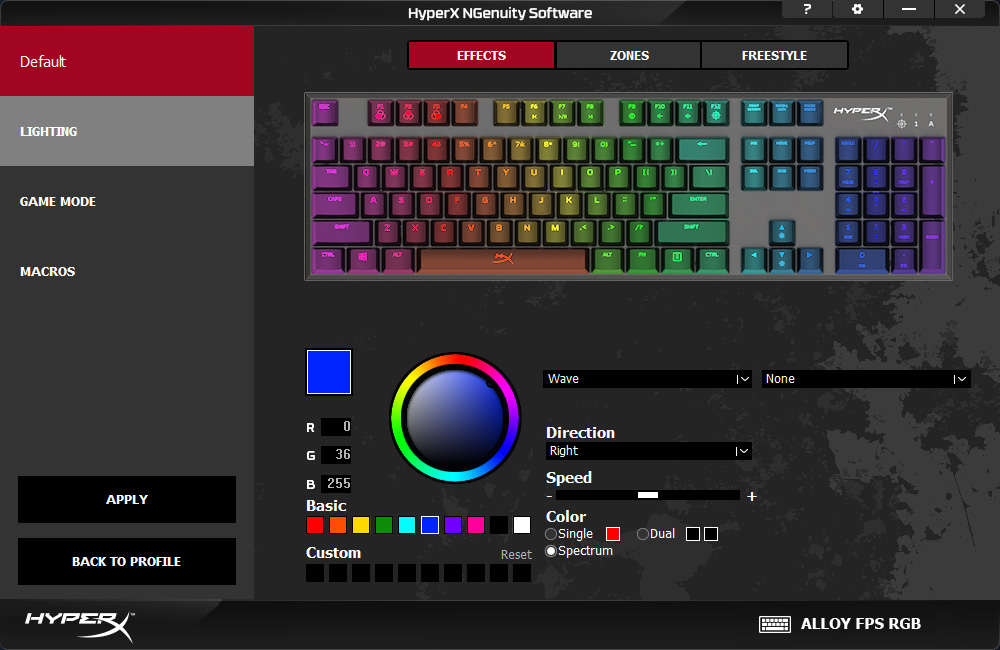 The three on-board profiles can be activated using the keyboard’s Fn key and one of the profile shortcut keys assigned to F1 to F3. Profiles can be duplicated, imported, exported, given its own name and icon, linked to specific applications, or assigned to one of the pre-installed game profiles for specific titles. Each of the profiles is capable of storing one RGB lighting configuration, one Game Mode configuration, and one set of macro assignments.

The Game Mode page allows users to disable not only the Windows Key but also any other keys the user chooses as well as a few key combinations such as Alt and Tab, Alt and F4, Shift and Tab, and Crtl and Esc, which is very useful when for some games that require a lot of keybinds that use modifiers such as MMORPGs. Macros were also fairly easy to record and assign and not dissimilar to how software from other peripheral makers implement it. 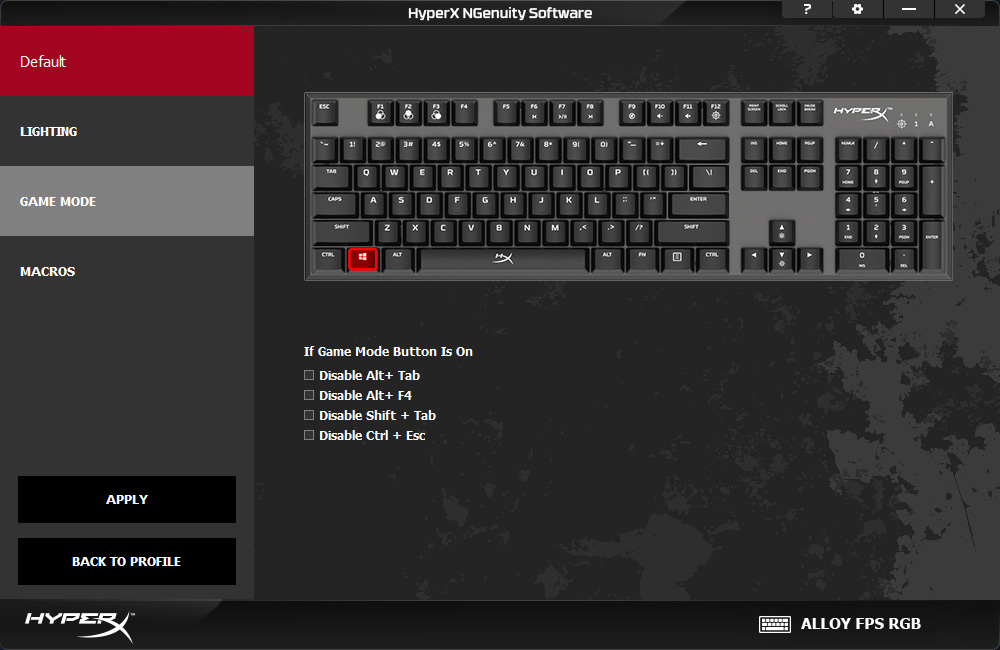 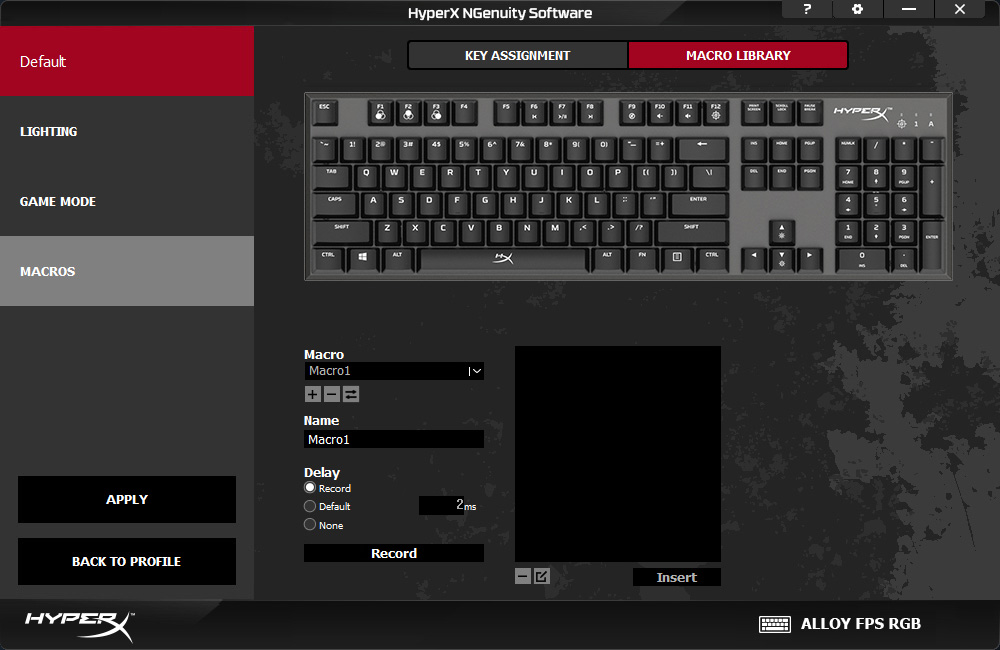 As previously mentioned, HyperX has decided to equip the Alloy FPS RGB with Kailh Silver Speed switches instead of the Cherry MX switch variants they’ve previously used for their other keyboards. The Silver Speed variant from Kailh, which is similar to Cherry’s Speed Silver, is a linear switch that has an extremely light actuation force (40g) as well as an equally short travel distance (3.5mm and actuation point (1.1mm).

As a longtime user of tactile switches including Cherry MX Browns, Gateron Browns, Romer-G  Tactiles, and Razer Oranges, transitioning to the linear Kailh Silver Speed switches was a rather big change. Not only does the Silver Speed not have that tactile bump that I’ve been used to for years but its low actuation force and actuation point made it incredibly easy to accidentally trigger unintended keypresses. 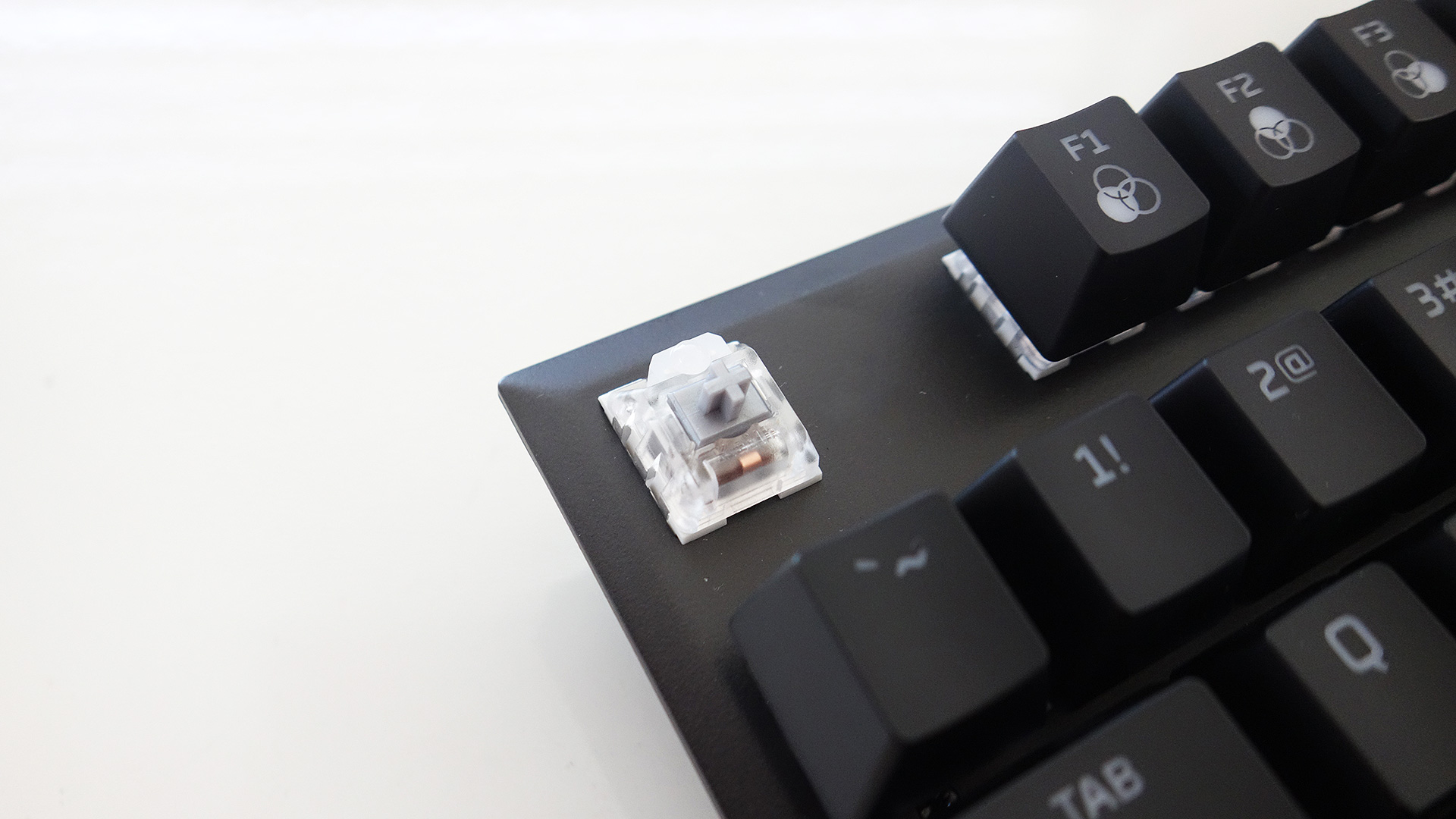 It’s very easy to unintentionally trigger keypresses just by laying your fingers on the keys so those who tend to rest their fingers on the keys should keep that in mind. There were multiple times where I stopped to check my other monitor only to return to my primary one to find that I had accidentally spammed a single character into my document because I was resting my fingers on the key.

In spite of that though, I eventually got used to the Silver Speed switches and they’ve quickly become one of my favorite switches for both gaming and typing. The miniscule amount of effort needed to trigger them makes long typing sessions less tiresome and the high actuation point makes it incredibly reliable in games that require quick reflexes. While switch wobble is still inconsistent between switches and it’s hard to determine how long these will last, I was definitely impressed by how the Silver Speed from Kailh performed.

The HyperX Alloy FPS RGB was a pretty good surprise. The great design and build quality of keyboard is as expected from HyperX and its minimal amount of features were also purposefully chosen and implemented. It would have been nice for the USB 2.0 port to have more uses but apart from that the design and features of the keyboard are spot on. And while I wasn’t a very big fan of Cherry MX clones such as the ones from Kailh and even Gateron but the Silver Speed switches may have swayed me a bit more. While the switches may not be everyone’s cup of tea and they did take some time to get used to, I ended up enjoying them a lot for both typing and gaming. Overall, the Alloy FPS RGB was an incredibly impressive and those looking to try out something new should definitely check it out.