When the original Zenfone, also called the Zenfone 5 (because of its 5-inch display), launched four years ago, it provided consumers with an Android smartphone that was not only capable but also affordable. While the company doubled-down on that ethos even more with the Zenfone 2 series back in 2015, the subsequent lines after that seemed to show that ASUS was trying to move away from that position, much to the dismay of those who enjoyed their powerful yet affordable devices. But with the launch of the new Zenfone 5 series, it looks like the company is finally returning to form.

The Zenfone 5 is packaged in a thick navy blue cardboard box with blue holographic print for the Zenfone 5 label, Zenfone logo, and the “We Love Photo” slogan the company has been using since the Zenfone 4. The rear of the box features the usual labels, information, and stickers to indicate the model of the device, some of its specifications, and more. 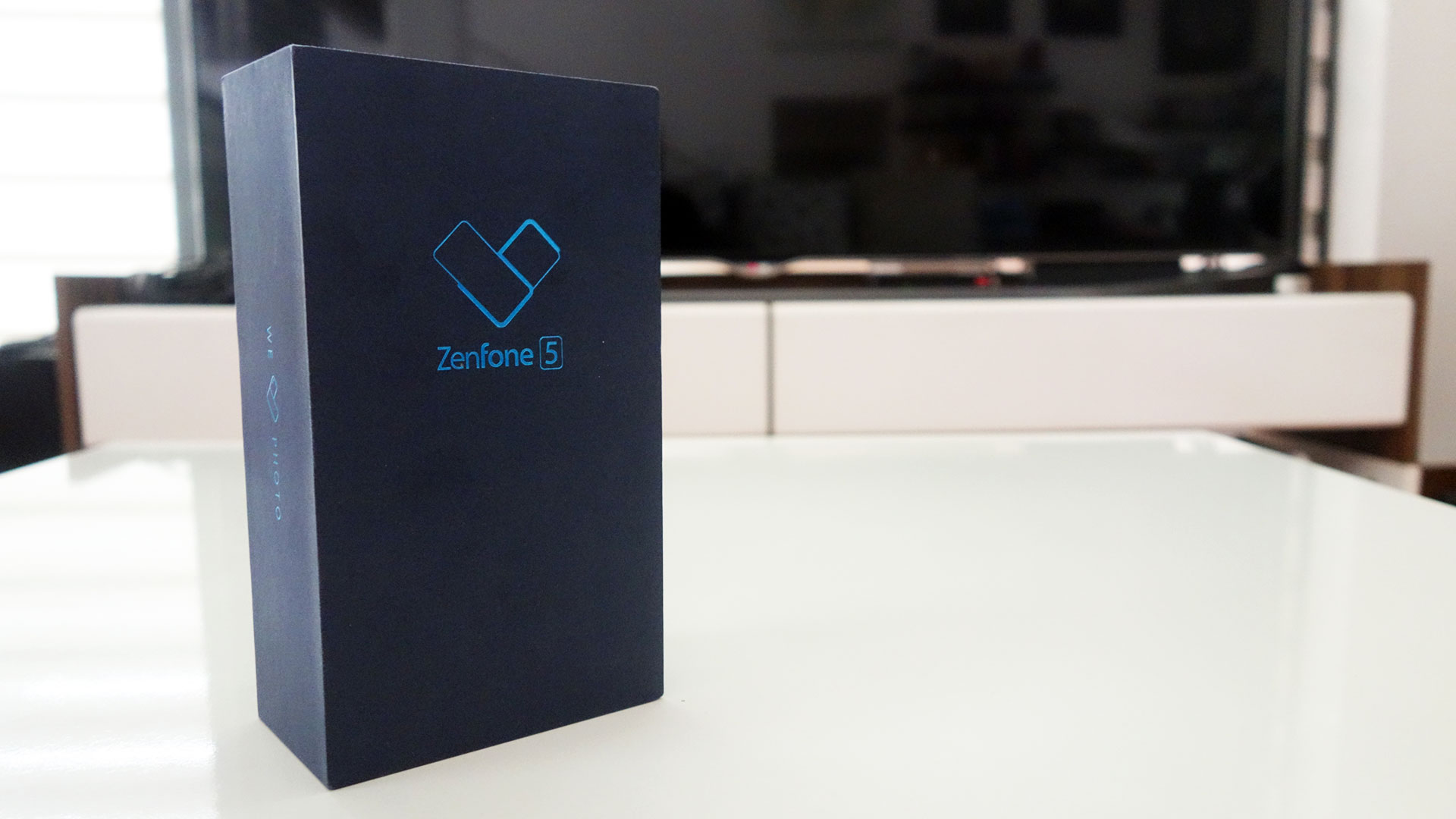 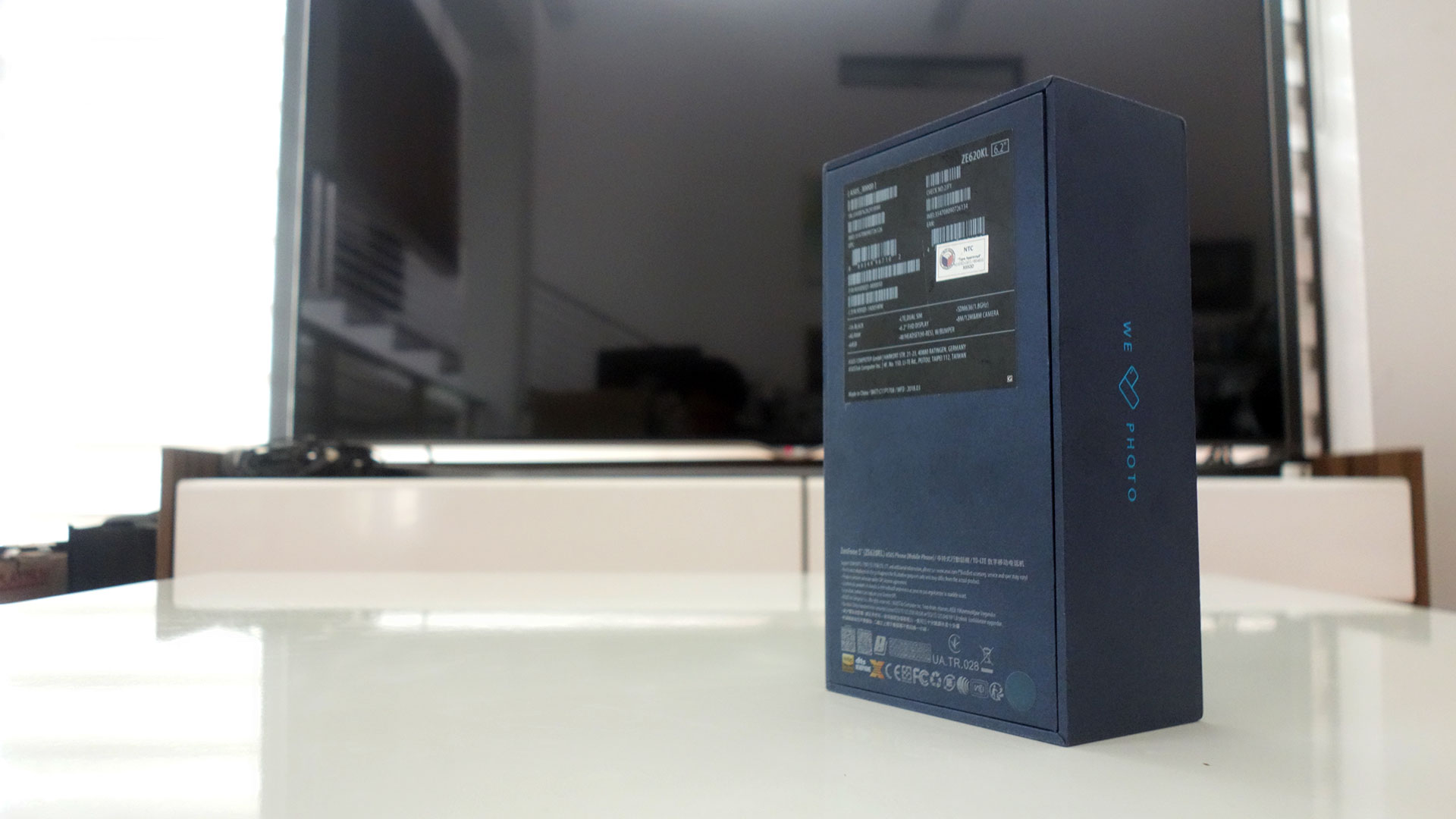 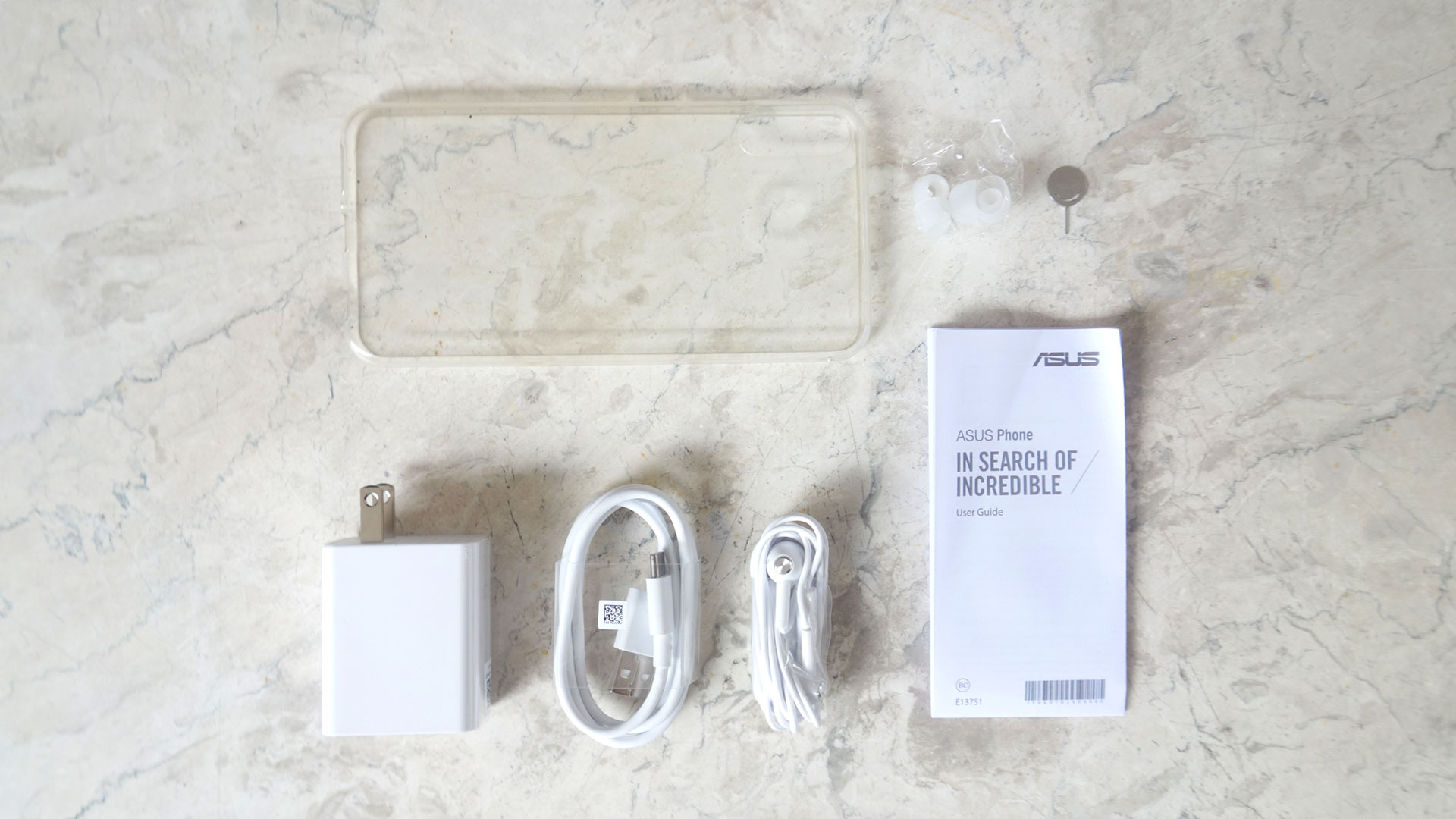 Removing the top of the box reveals a smaller, thinner cardboard box that holds the included silicone case, manuals, warranty information, and a SIM card tray ejector pin. Under the smaller box is the phone itself, which is usually covered in plastic (our review unit didn’t come wrapped). Taking out the phone from the box reveals a another compartment which holds the fast USB Type-C charger, a USB Type-C cable, in-ear earphones, and extra earphone tips.

The Zenfone 5, the mid-ranger of the new series, which also includes the high-end Zenfone 5 and entry-level Zenfone 5Q, features a metal frame as well as front and back glass panels. The metal frame is fairly simple, although the chamfered edges around the glass panels help make the device easier to grip. There aren’t any bells-and-whistles around the frame and only include the necessities such as the power button, volume rocker, SIM card tray, speaker grill, headphone jack, and a USB Type-C port.

The SIM card tray on the Zenfone 5 supports up to two SIM cards but using a microSD card will sacrifice one of the SIM card slots. It would have been nice to be able to use two SIM cards as well as a microSD card, like the company’s Zenfone Max Pro M1, but it’s a small issue that isn’t much of a deal breaker. 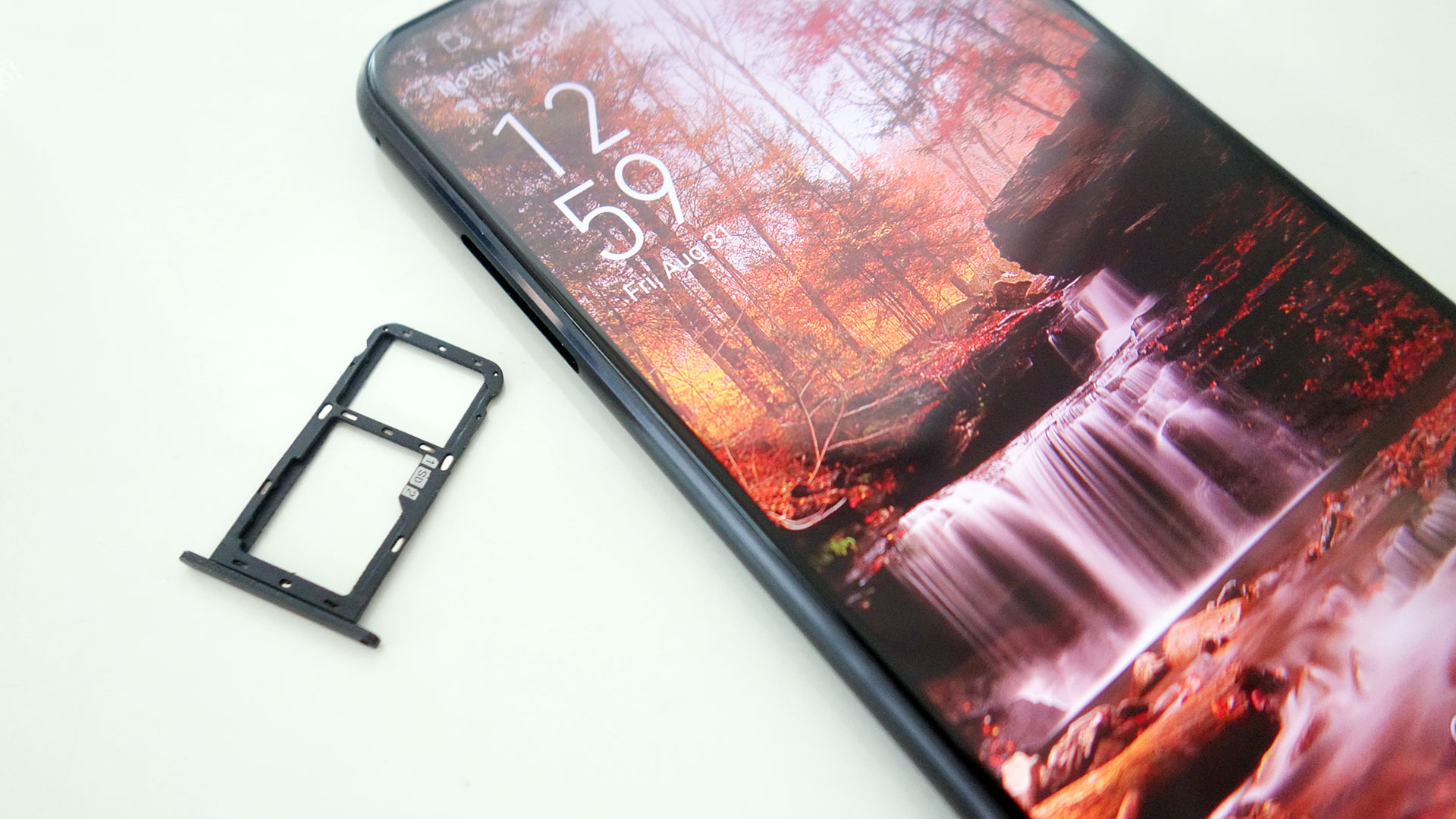 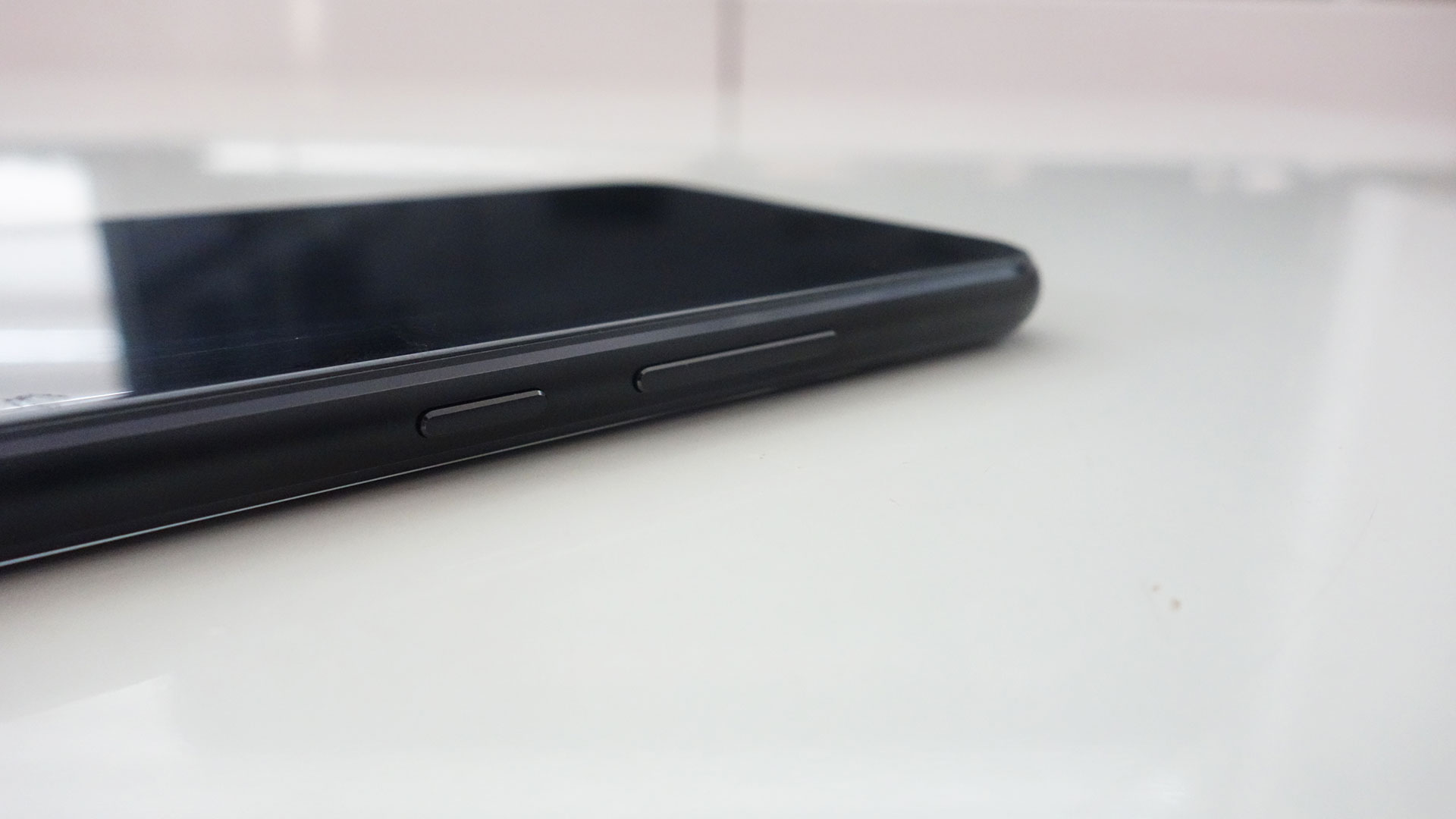 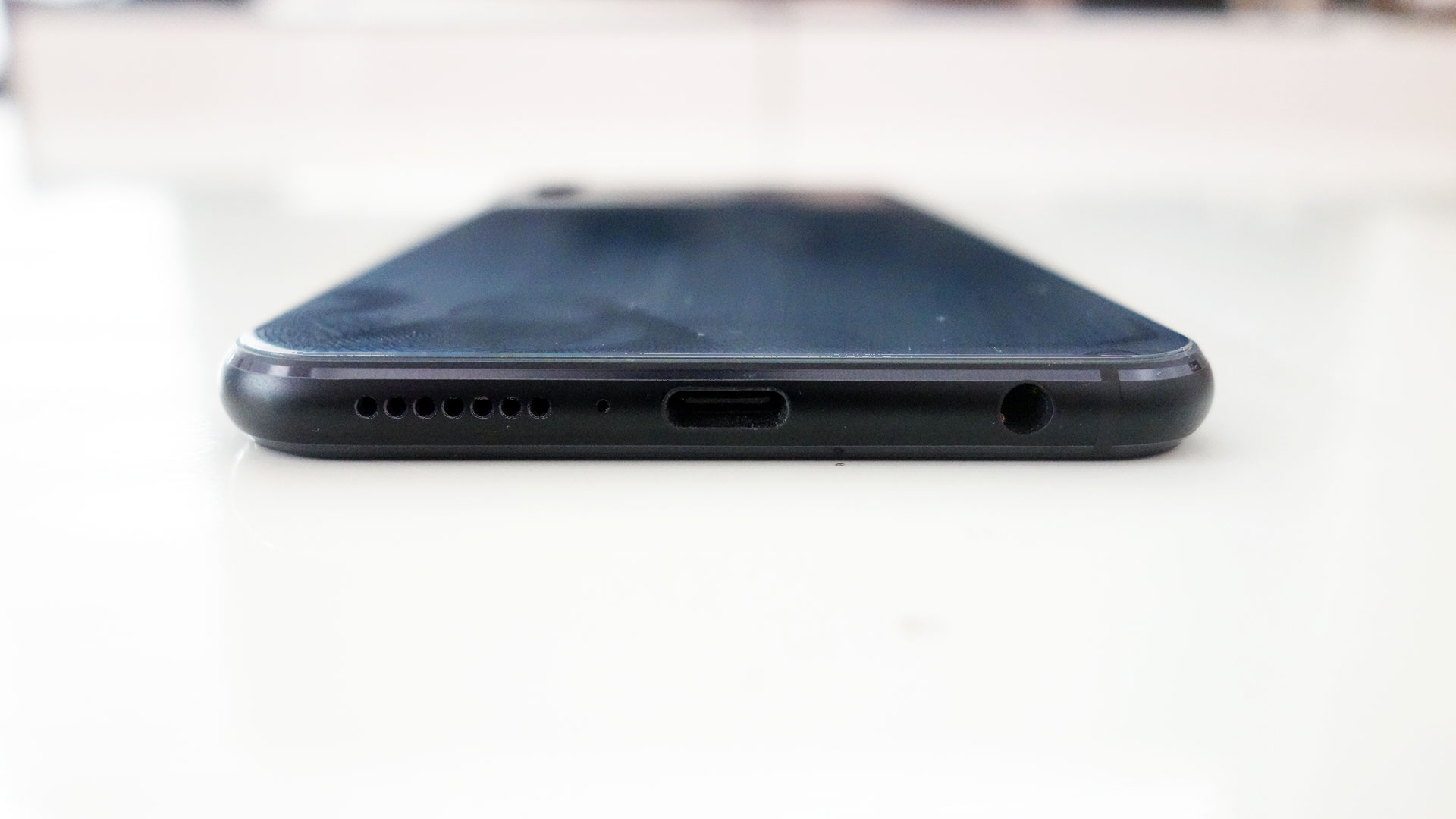 Unsurprisingly, the Zenfone 5 features a notch, albeit a much narrower one than the notch found on the iPhone X. As usual, the notch houses the device’s front-facing camera, the earpiece, and a light sensor. There’s also a slight and barren chin beneath the display. According to ASUS, the Zenfone 5 features a screen-to-body ratio of 90%, which seems pretty accurate considering its display size, almost bezel-less design, notch, and thin chin.

The Zenfone 5 comes with a 6.2-inch Super IPS+ display with a screen resolution of 1080 x 2246 pixels. While the display is significantly larger than the one found on last year’s Zenfone 4 (which measured 5.5-inches), the thin bezels of the Zenfone 5 help it to measure almost the same as its predecessor. And while the Super IPS+ display isn’t as good as an OLED/AMOLED, it’s still pretty impressive when looked at directly from the front, with excellent color reproduction, contrast, and brightness (which according to ASUS is capable of up to 550 nits). 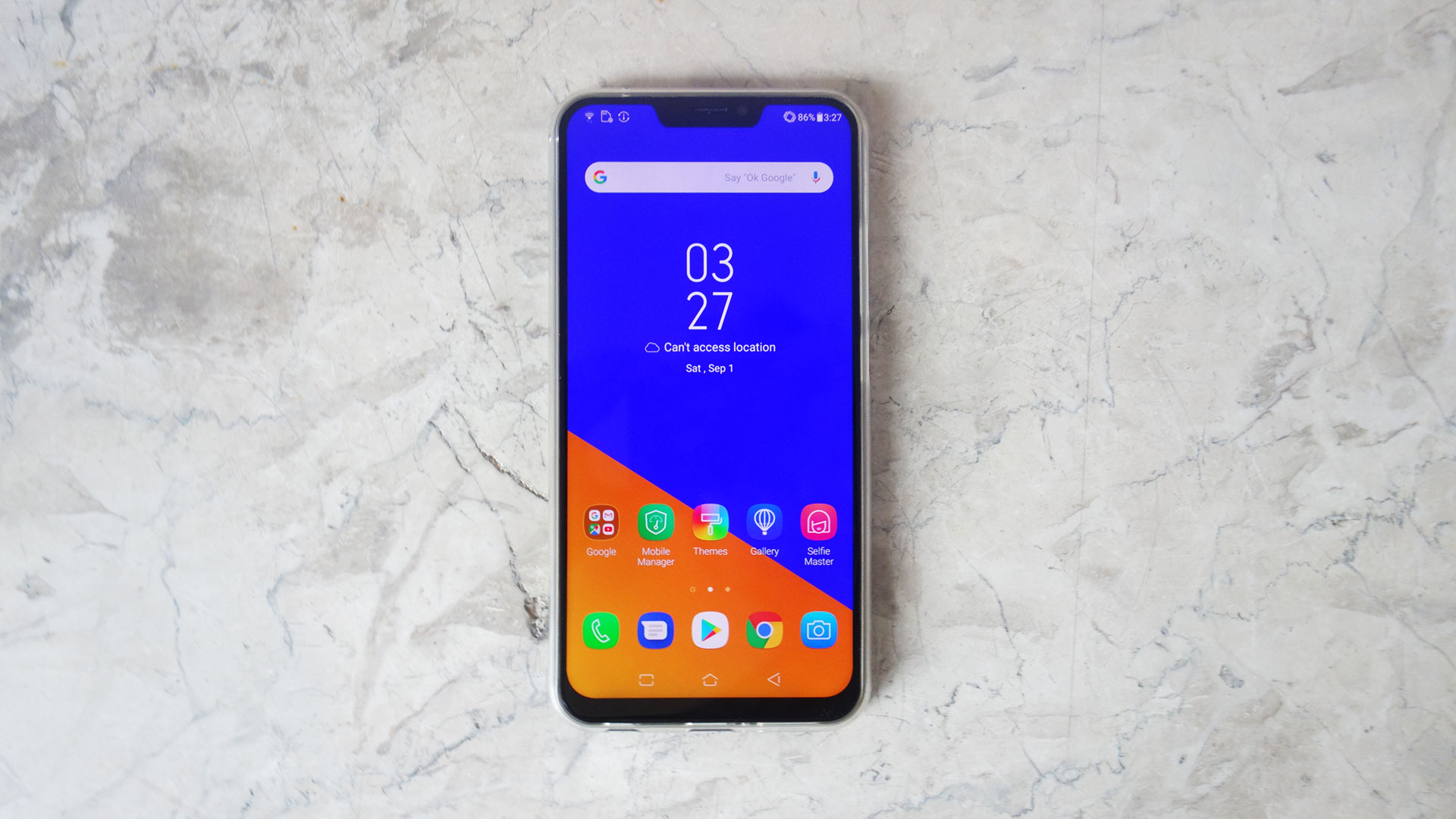 The colors of the display on the Zenfone 5 can also be adjusted to suit the user’s needs. The default wide color gamut mode produces more saturated colors while the standard mode is more subdued. Users can also customize the color mode and temperature to their liking. There’s also a blue light filter that can be customized and switched on when the user is in darker environments.

While the metal frame and front potion of the Zenfone 5 seem pretty standard, the rear panel of the device is where ASUS decided to put a little bit of their own design touches into. Beneath the glass panel is a piece of metal that’s been polished to resemble the cover of one of the company’s Zenbook laptops. The polish of the rear panel makes it look like rays of light are beaming out from the device’s fingerprint scanner, which makes the device look even shinier. 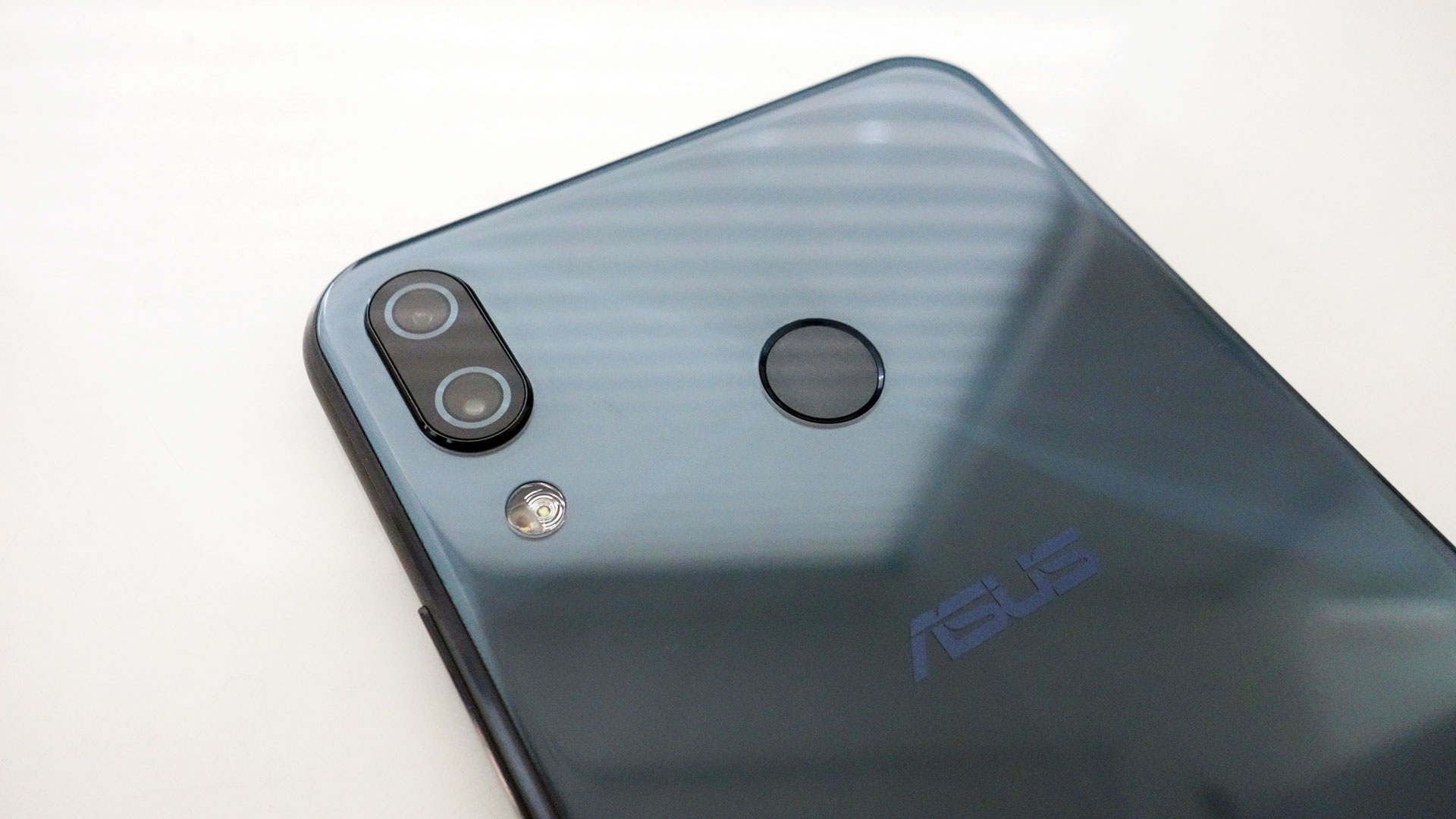 Apart from the round fingerprint scanner located near the top center of the rear panel, the rear of the Zenfone 5 also features its dual camera system and accompanying LED flash. The implementation of the Zenfone 5’s dual rear cameras is quite different from other popular smartphones. Instead of a secondary camera that’s used to collect image data for depth-of-field effects, the second camera on the Zenfone 5 features a wider lens to allow for wide-angle photos.

Much like the Zenfone 4 series, ASUS is once again putting a lot of emphasis on its cameras for the Zenfone 5. This time, it’s touting AI features for its camera that are not only supposed to help users take better photos by detecting the type of photo the user is trying to take but also from learning the user’s preferences as they take more photos. While the former AI feature works pretty well, we weren’t able to spend enough time with the Zenfone 5 to truly determine whether the latter feature was really effective. 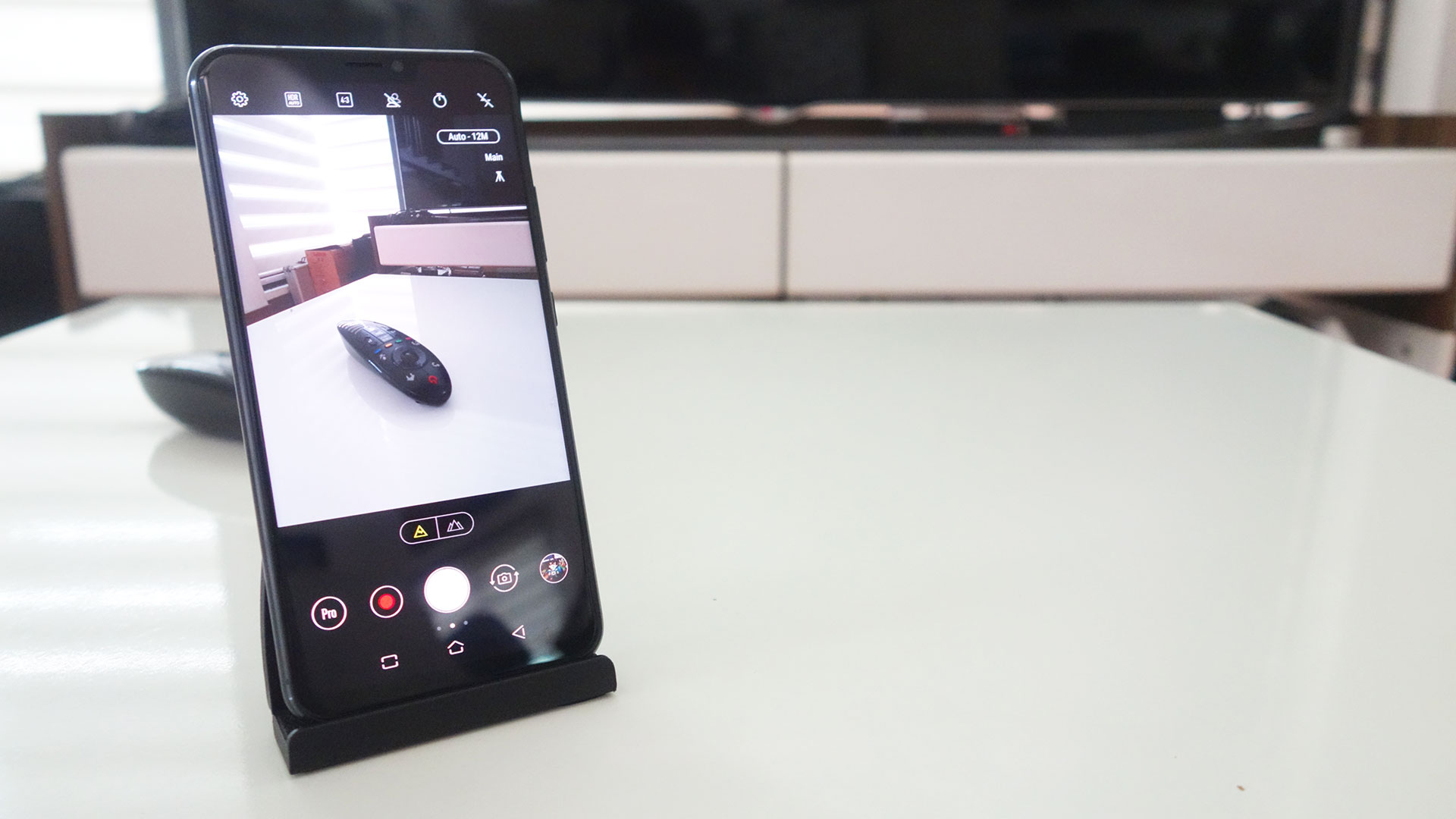 The camera app on the Zenfone 5 was pretty easy to learn and use, with the features and controls all easily accessed and distinguishable. As previously mentioned, the camera is able to determine what type of photo you’re trying to take and if HDR is one, it will let you know when it’s ready to take a photo. Other features of the Zenfone 5’s camera include a depth effect feature, but given the different dual rear camera implementation, the results aren’t really impressive.

There’s also a Pro mode that allows users to adjust everything from White Balance, Exposure Value, ISO, and Shutter Speed, as well as switch from auto to manual focus, which is especially handy for those who want more control when shooting photos as it allows for some effects that aren’t usually achievable when the camera is set to auto.

The HDR can be a bit slow at times though, especially when a scene has a lot of movement. And the resulting photos may vary quite a bit, with some showing impressive HDR while others look like the HDR didn’t actually kick in. 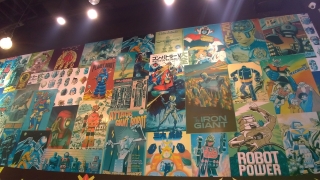 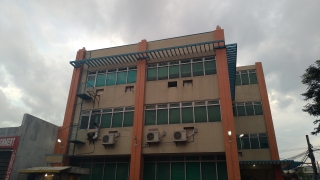 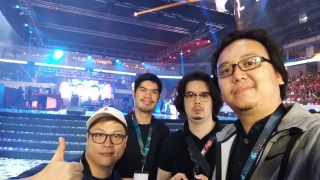 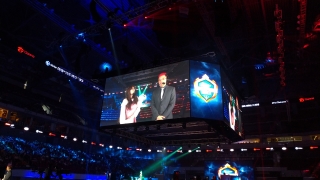 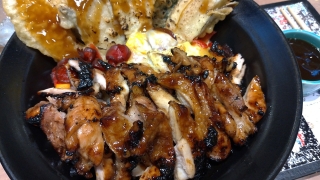 In general, the rear cameras on the Zenfone 5 take great photos especially when in good light. The color reproduction, exposure, and detail are all impressive albeit the colors look a tad too saturated. Using the secondary, wide-angle lens camera produces photos with a bit less detail but are still decent nonetheless. Low light photos using the rear cameras are also pretty impressive although there’s still some noise and loss of detail to be expected. It’s not the best out there but definitely not bad.

Lastly, the selfie camera is also quite decent when used in good lighting but it does start to have trouble with exposure and focus if there’s strong backlighting or or in low light situations, respectively. 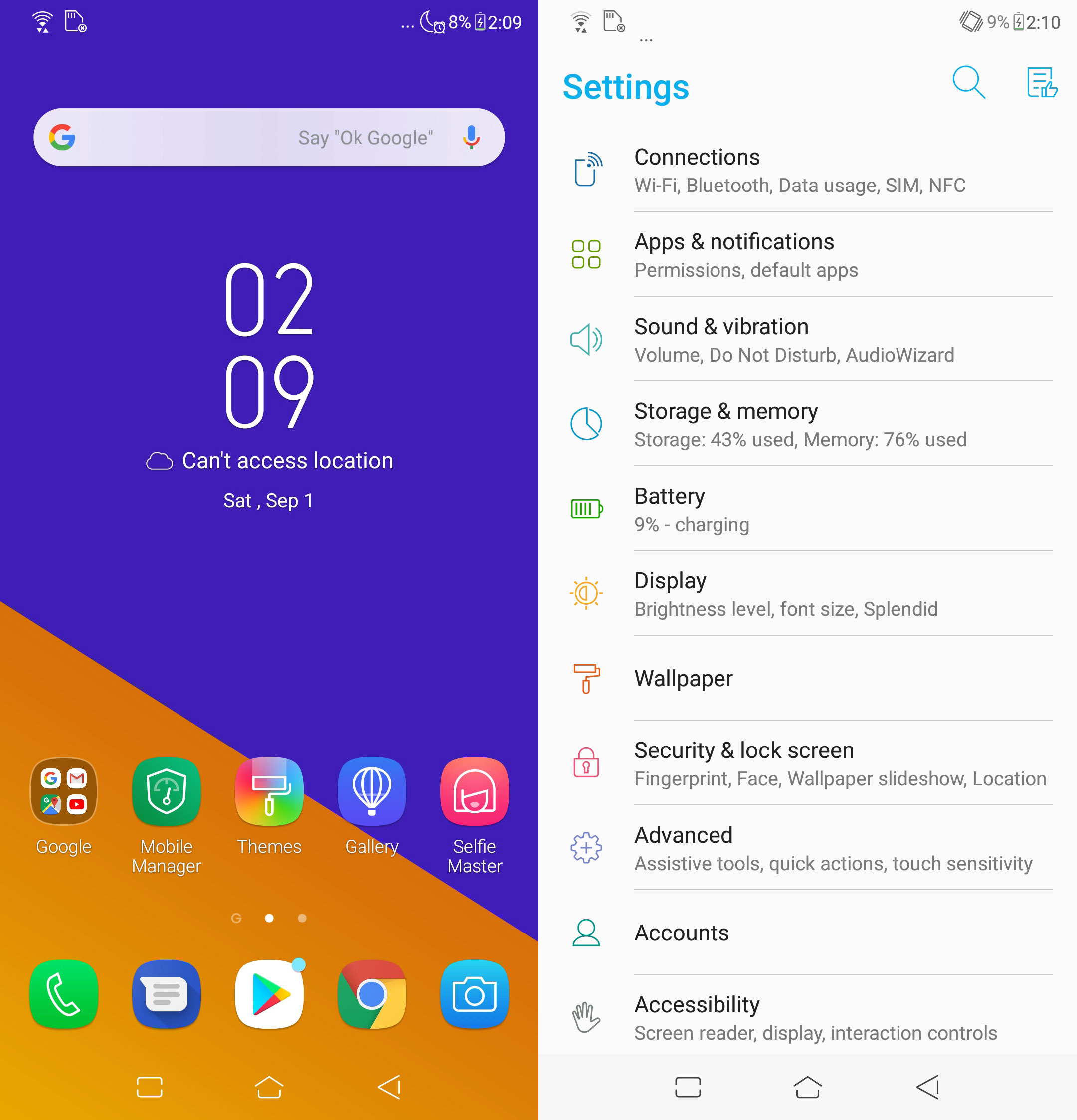 The Zenfone 5 comes with ASUS’s latest ZenUI 5.0 interface that now features barely any bloatware and feels a lot closer to stock Android. While some of the default apps still come from ASUS, such as the phone/dialer app, many of them now use Google’s own, such as the SMS app. More importantly though, ZenUI 5.0 runs rather smoothly, with

ZenUI 5.0 also comes with some interesting features that help the overall user experience, including the option to hide the notch by blacking out the areas beside it. The bottom software buttons can also be set to hide automatically when not in use and can be pulled up with an upward swipe near the bottom of the display.

The Zenfone 5 is equipped with a Qualcomm Snapdragon 636 processor coupled with an Adreno 509 and 4GB of RAM. The Zenfone 5 also comes with an AI Boost feature that allocates and optimizes processing power for games and other resource-intensive apps. We ran the Zenfone 5 through our usual round of software benchmarks with AI Boost both on and off.

The benchmarks we used include AnTuTu Benchmark, a general smartphone benchmark; Geekbench 4, which has separate benchmarks for the smartphones CPU, GPU, and battery; and 3DMark, which is a GPU-intensive benchmark that is usually used to see how well a device can handle graphics-intensive applications such as mobile games. 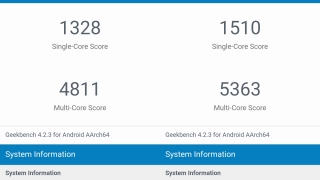 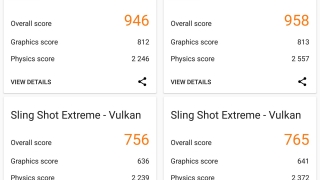 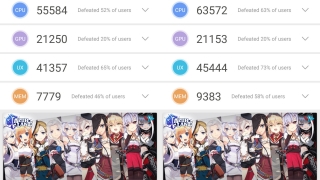 Looking at our results, the Zenfone 5 performs around the same as flagship smartphones from 2016, which is pretty impressive for a midrange smartphone in 2018 at its price. While it does fall behind some of its current competitors in some benchmarks, it is able to surpass them in others, especially when AI Boost is turned on.

We also ran several of the most popular games on the Zenfone 5 including PUBG Mobile, Arena of Valor, Mobile Legends, and Rules of Survival. All of the games loaded quickly and ran incredibly well with no frame drops whatsoever. The combination of the Snapdragon 636, Adreno 509, and 4GB RAM enables the Zenfone 5 to run any current games available in the market with ease.

ASUS has also included the latest iteration of their Game Genie software with the Zenfone 5, which lets users easily record gameplay, take screenshots, block notifications, assign more resources to the game, and more. And even with Game Genie running in the background and recording gameplay, the Zenfone 5 is still able to run all of the games we’ve tested without any issues.

Gaming and media consumption on the Zenfone 5 is complemented well by its 3.5mm headphone jack as well as its stereo speakers. The implementation of the stereo speakers on the Zenfone 5 is quite interesting. Instead of two independent speakers on the front of the device, one speaker is located on the bottom of the device while the  ear piece acts as the other speaker. The speakers are impressively clear and loud with an even more impressive frequency range for a smartphone at its price range.

The battery life on the Zenfone 5 is pretty much as expected from its 3,300mAh battery. It lasted around a day or so with light to moderate usage, including occasionally checking social media, message apps, and the a few YouTube videos. Heavy usage, especially with AI Boost on, reduces the battery life significantly to about 8 hours so we recommend having a power bank or your charger handy if you plan to have a long gaming session. Charging the Zenfone 5 with its included quick charger is rather quick, getting from almost empty to full in only about two hours.

The ASUS Zenfone 5 is a capable mid-range smartphone that brings back what made the Zenfone line so popular – quality and performance at a competitive price point. Despite being more affordable, the Zenfone 5 doesn’t skimp on its design and features, which are mostly the same as its high-end brother the Zenfone 5Z. The design and build quality are still undeniably top-notch with impressive performance and purposeful features, especially considering that ASUS has finally taken out much of the bloat that previous Zenfones suffered from. The ASUS Zenfone 5 is definitely one of the best choices in the mid-range smartphone bracket and we’re glad that the company has finally returned to what originally made the Zenfone line so enticing.