The ASUS Zephyrus S17 GX701LXS is the latest iteration of the high-end ASUS ROG Zephyrus S line of gaming laptops and is a refreshed model of the same design from both last year and earlier this year, now equipped with one of Intel’s latest 10th generation processors along with NVIDIA’s new RTX 20 Super series GPUs. With this new model, ASUS has finally changed the naming convention of its Zephyrus S line to make it easier to identify the 15-inch and 17-inch variants without having to look at the model numbers.

Surprisingly, in spite of its improved internals, the new ASUS Zephyrus S17 GX701LXS is priced similarly to its predecessor at around PHP 209,995 yet offers significantly more value not just due to the laptop itself but also with what ASUS has included with it. To say that the packaging of the GX701LXS is huge is understatement. The package’s humongous box, which will definitely draw attention when you carry it out of the store or receive it from a courier, plays host to quite a number of smaller boxes inside for each of the peripherals and accessories ASUS has included with the laptop. 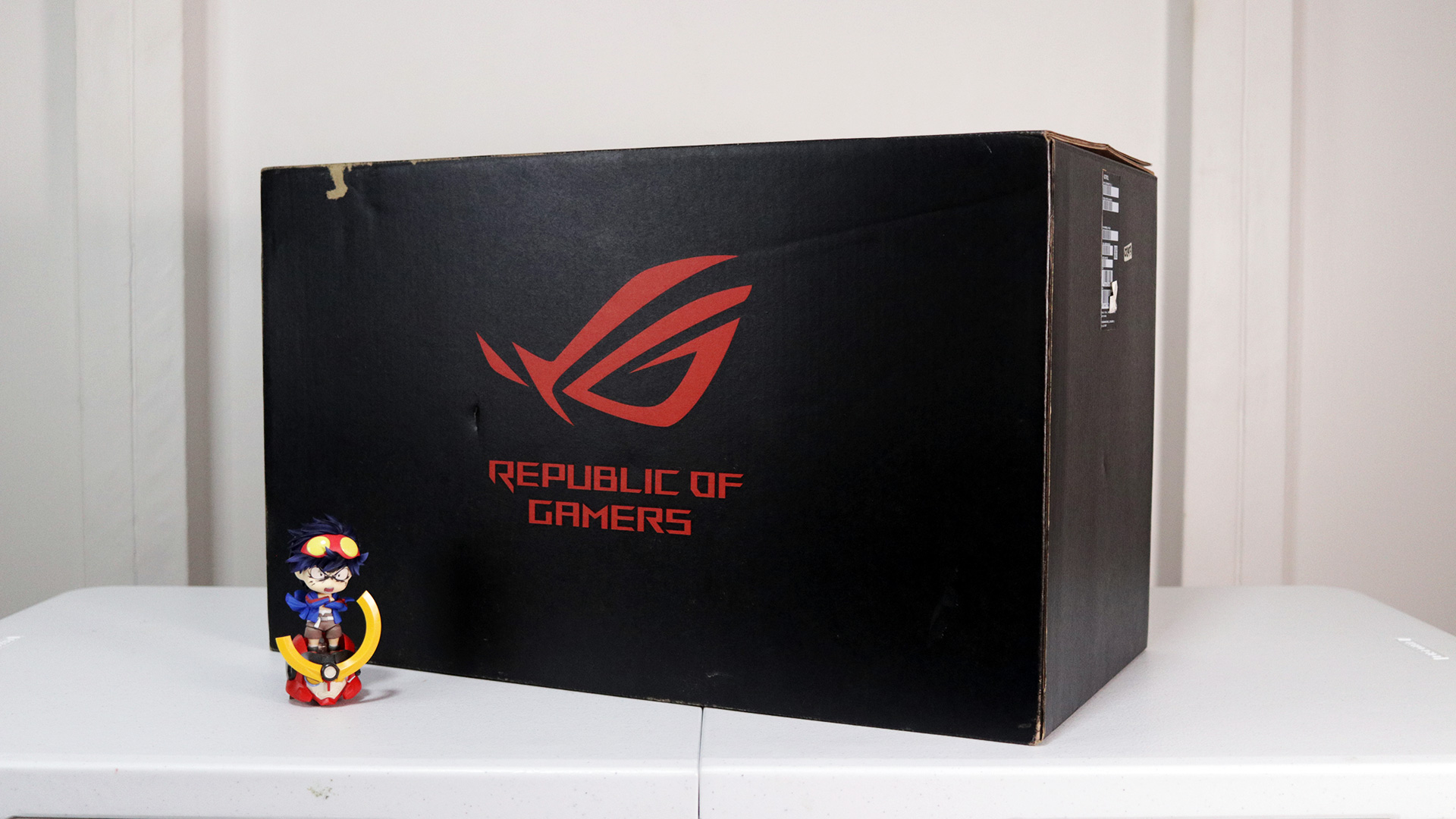 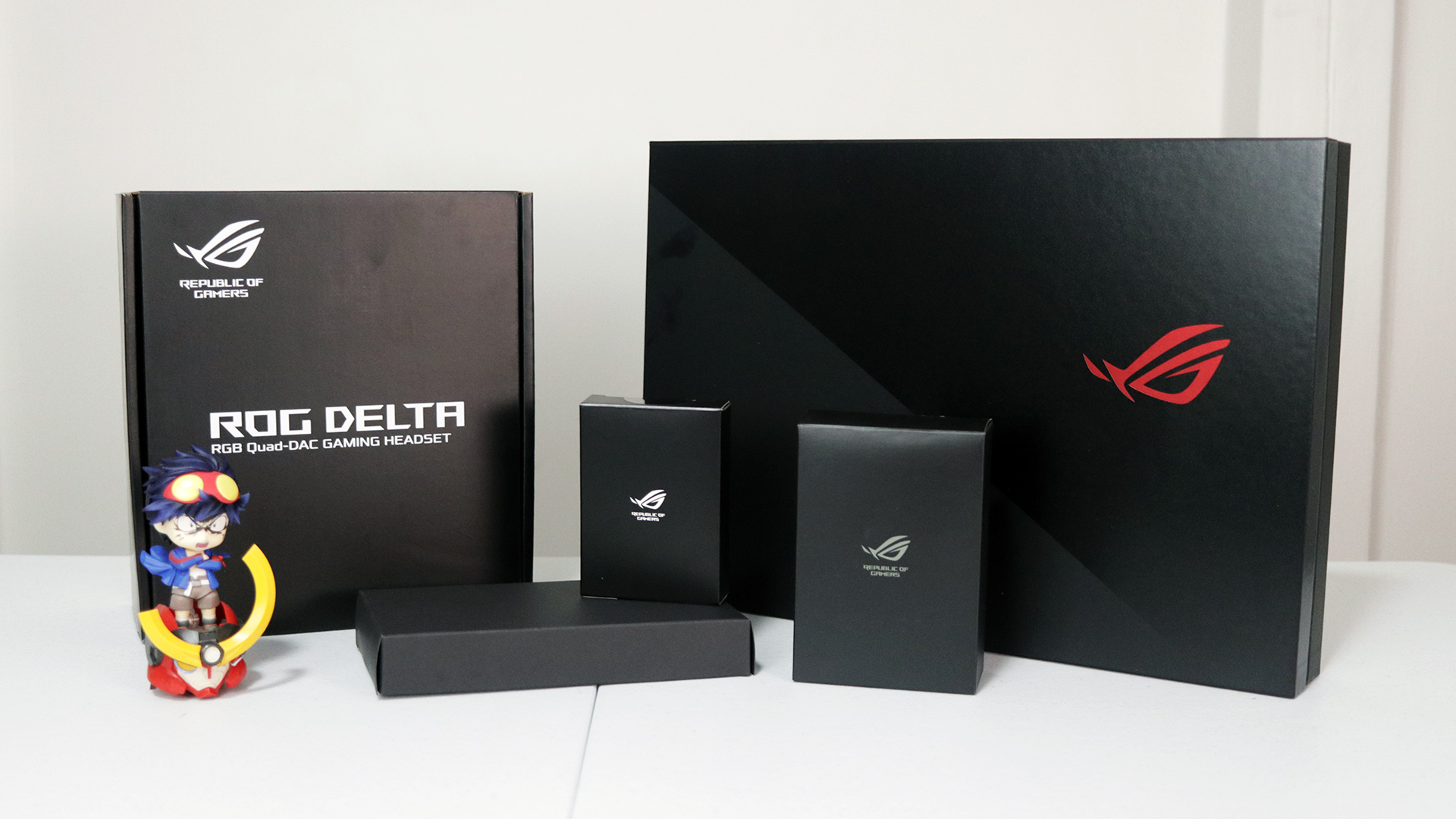 Apart from the ROG Ranger backpack, ROG Gladius 2 gaming mouse, and ROG Eye webcam that also came with the model released earlier this year, ASUS has also included an ROG Delta headset, which is a significant upgrade from the ROG Cerberus headset that the laptop came with previously, as well as a USB Type-C Power Delivery charger (in addition to the conventional laptop charging brick it already comes with).

The inclusion of the more portable USB Type-C PD charger gives users the option to leave the heavier conventional brick charger at home. Although it must be noted that the power brick is what users will want to use when they’re gaming on the Zephyrus S17. 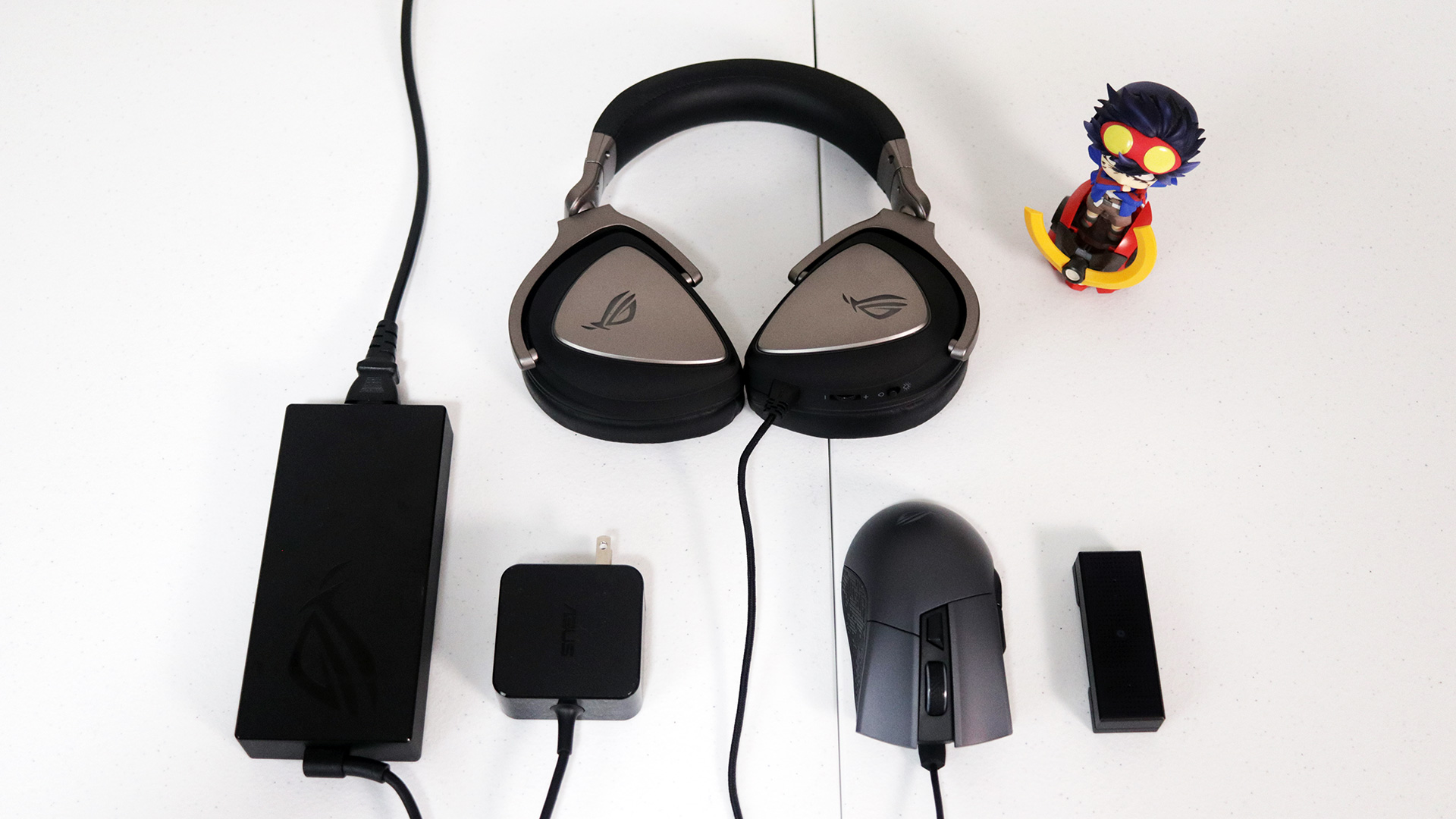 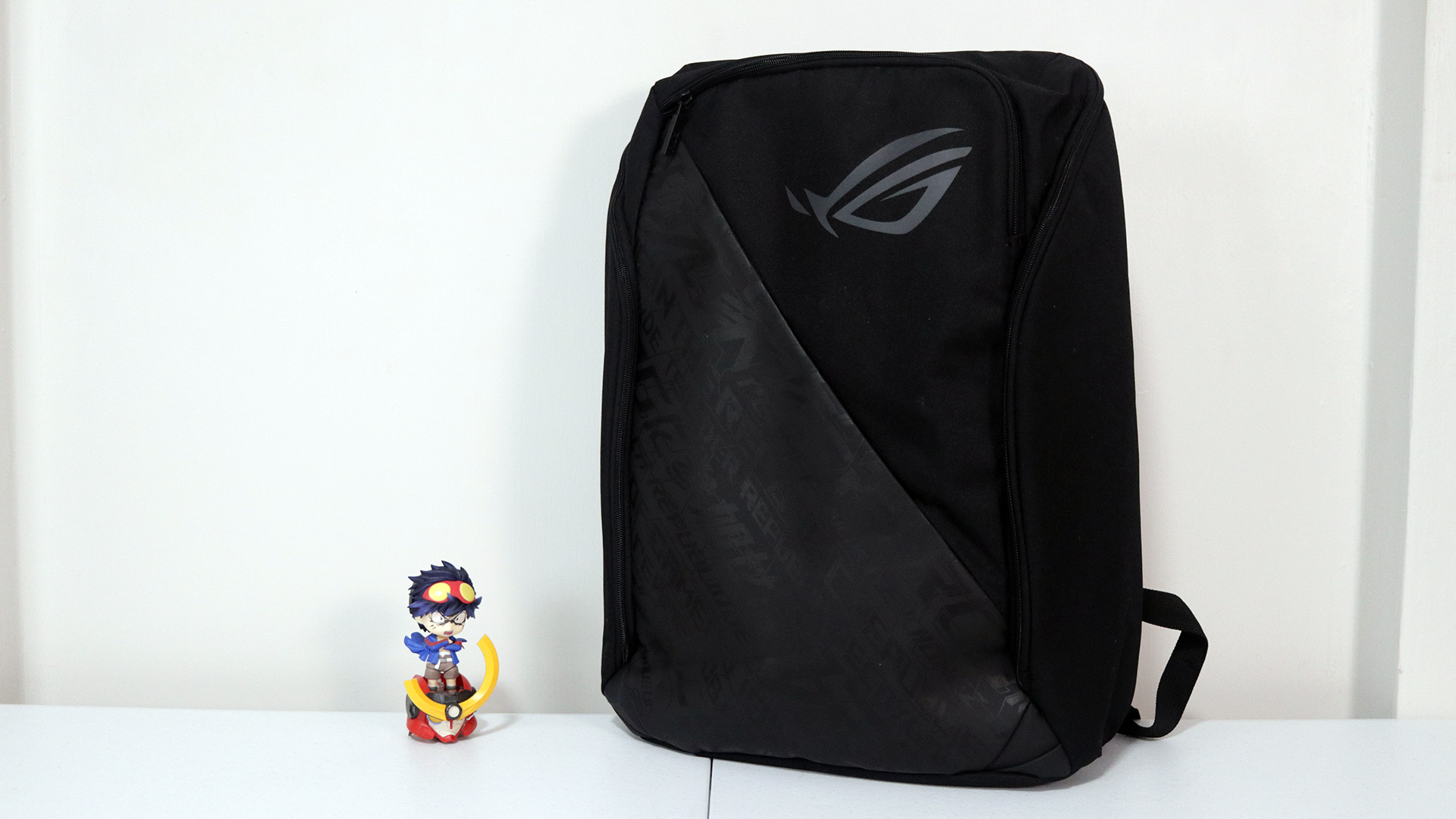 The Zephyrus S17 GX701LXS keeps the same design as last year’s model with the series’ signature thin and compact body. It measures only 39.9cm wide, 27.2cm deep, and 1.87cm thick. This new model is very slightly lighter though, weighing in at only 2.6kg compared to the 2.7k of the previous model. The majority of the laptop’s case is metal that feels both premium and rigid, with a mixture of smooth matte and brushed metal accented by copper-colored edges and a copper colored back side, which has been the signature aesthetic of the 17-inch Zephyrus S models. 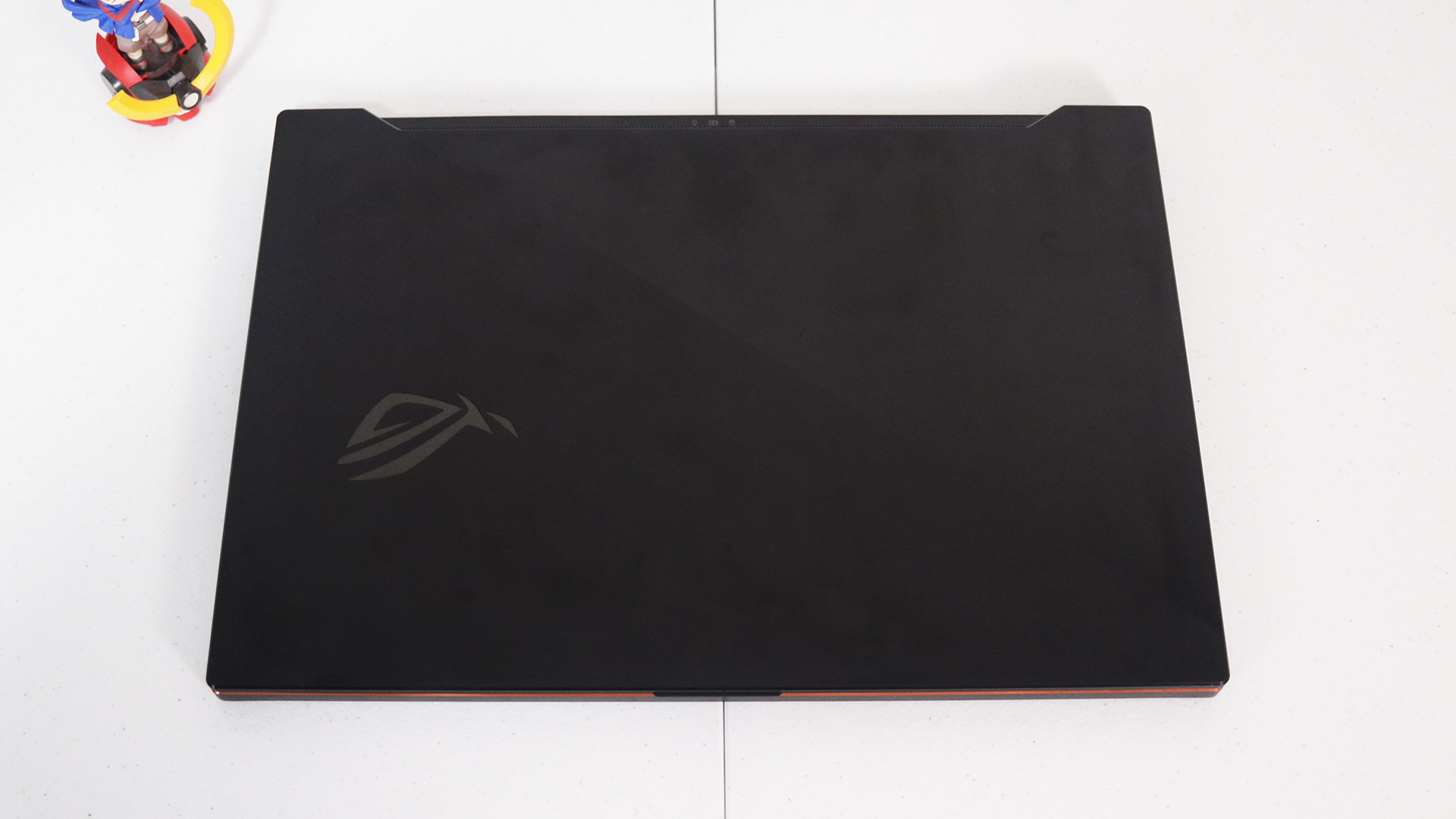 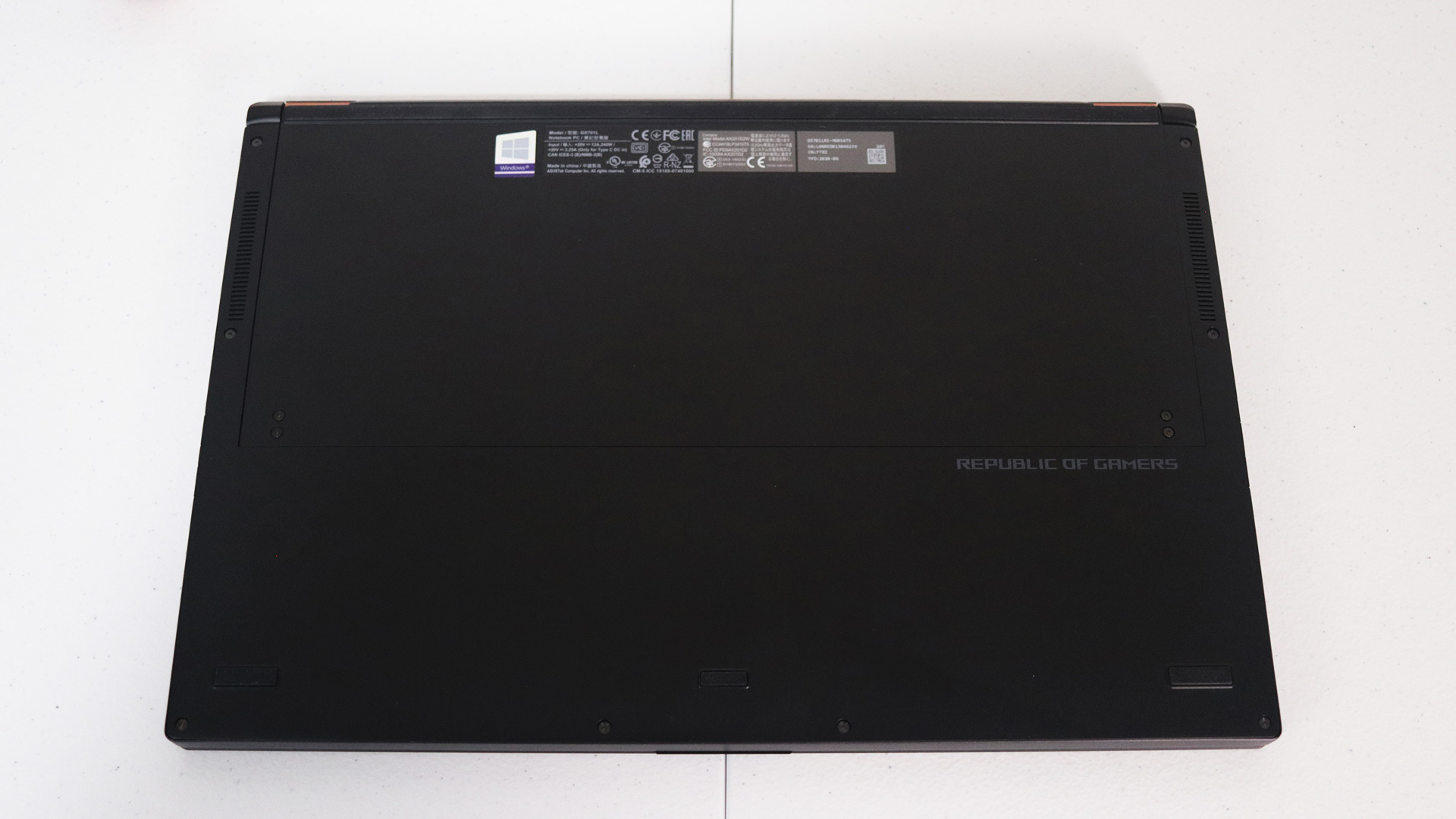 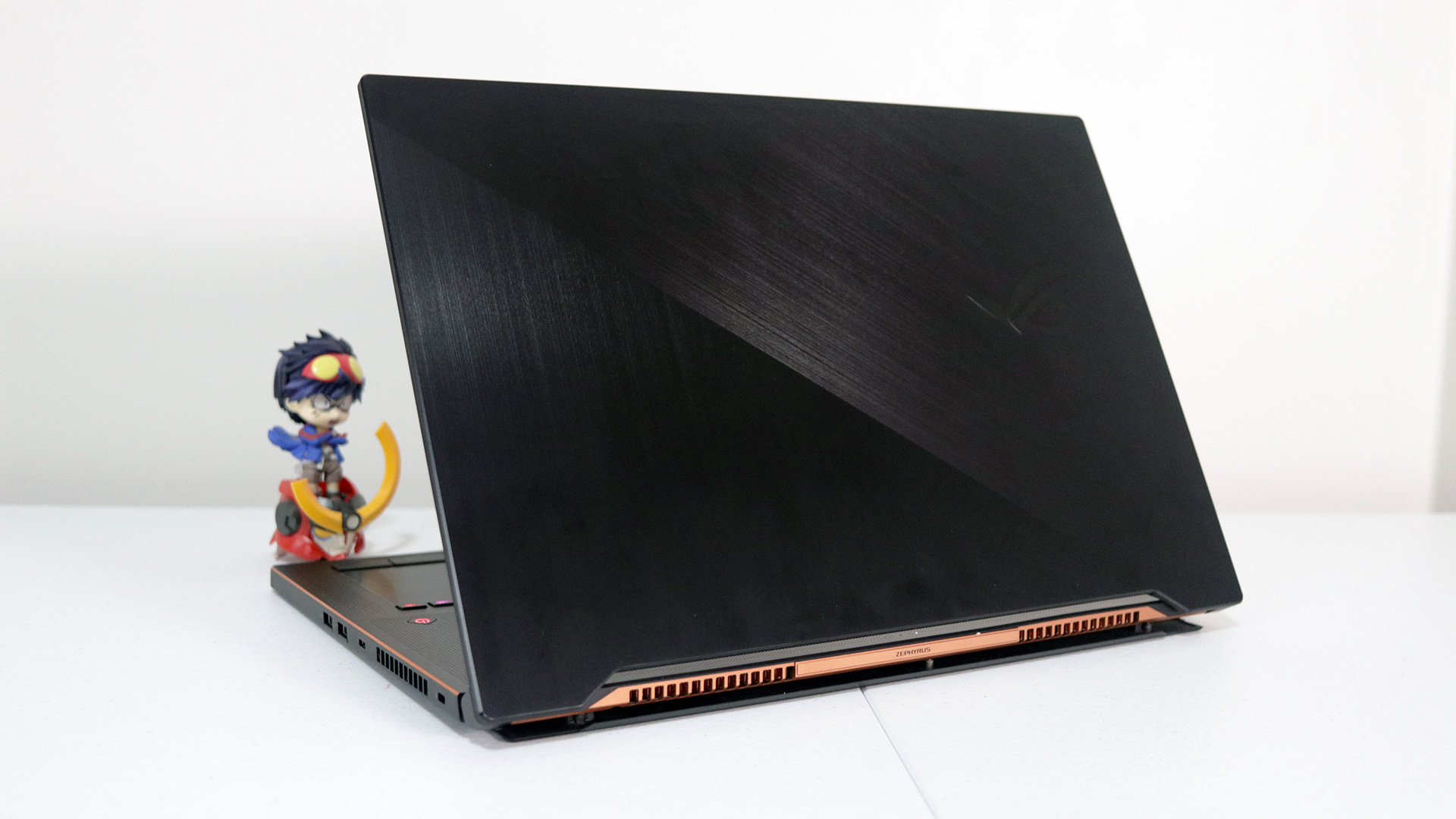 The signature two-point corner hinges and ROG Active Aerodynamic System (AAS) of the Zephyrus S line have been retained in this model where opening up the lid also raises the body of the laptop to reveal a large vent in the bottom of the laptop, which works in tandem with the large vent above the forward-positioned keyboard. While this design supposedly helps with the laptop’s cooling, it also makes it more vulnerable to damage due to the raised panel on the rear bottom of the laptop. This design ironically makes it less suitable for placing on your lap and makes it a bit more unwieldy to carry when the lid is open.

Apart from that, the general build quality of the GX701LXS is pretty impressive, which is significantly helped by its metal chassis. In spite of how thin the top lid is, it doesn’t flex enough to the point of concern. The rest of the chassis, particularly the lower half, is also impressively sturdy and features minimal flex apart from the very center of the air vent above the keyboard. 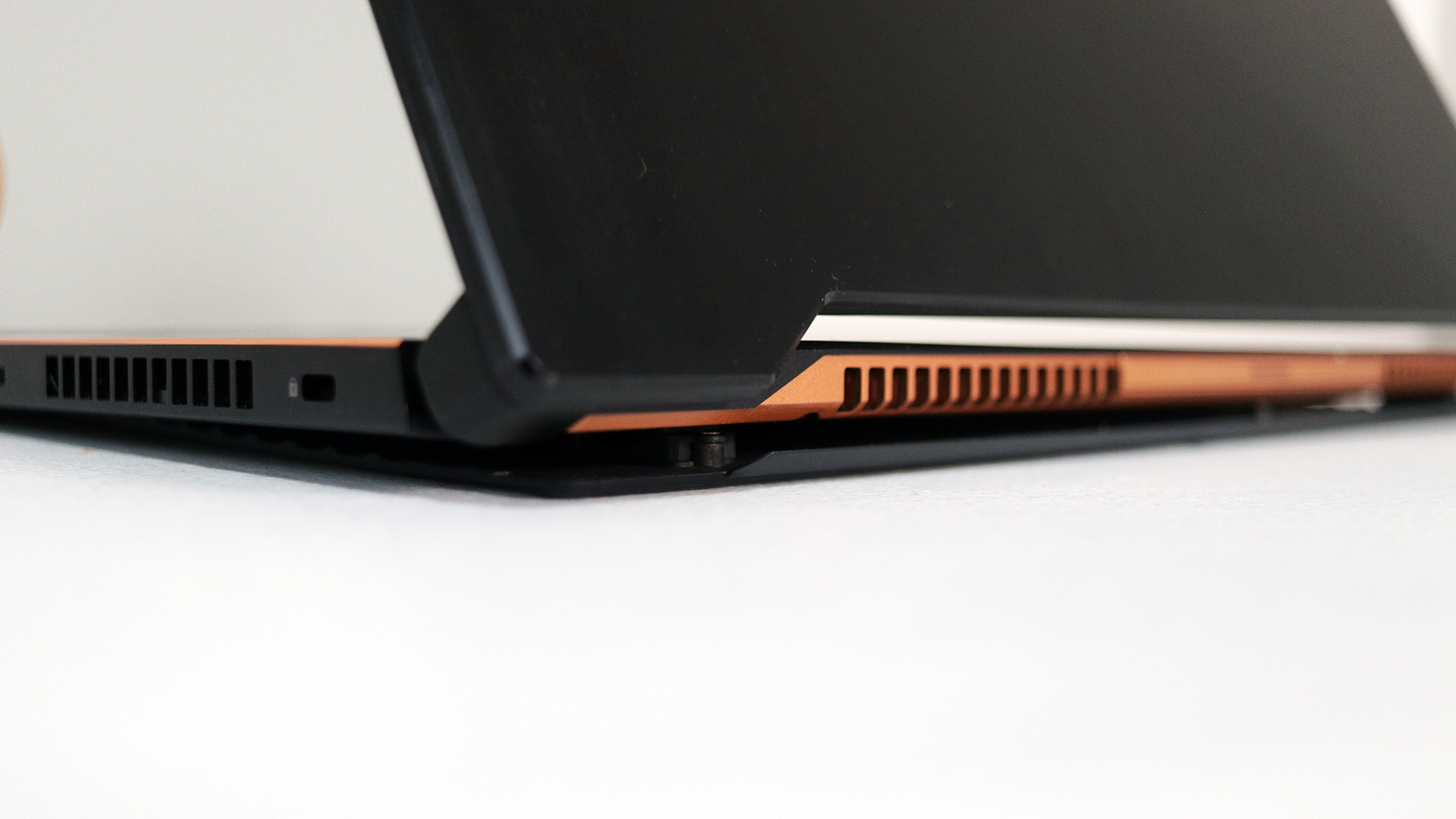 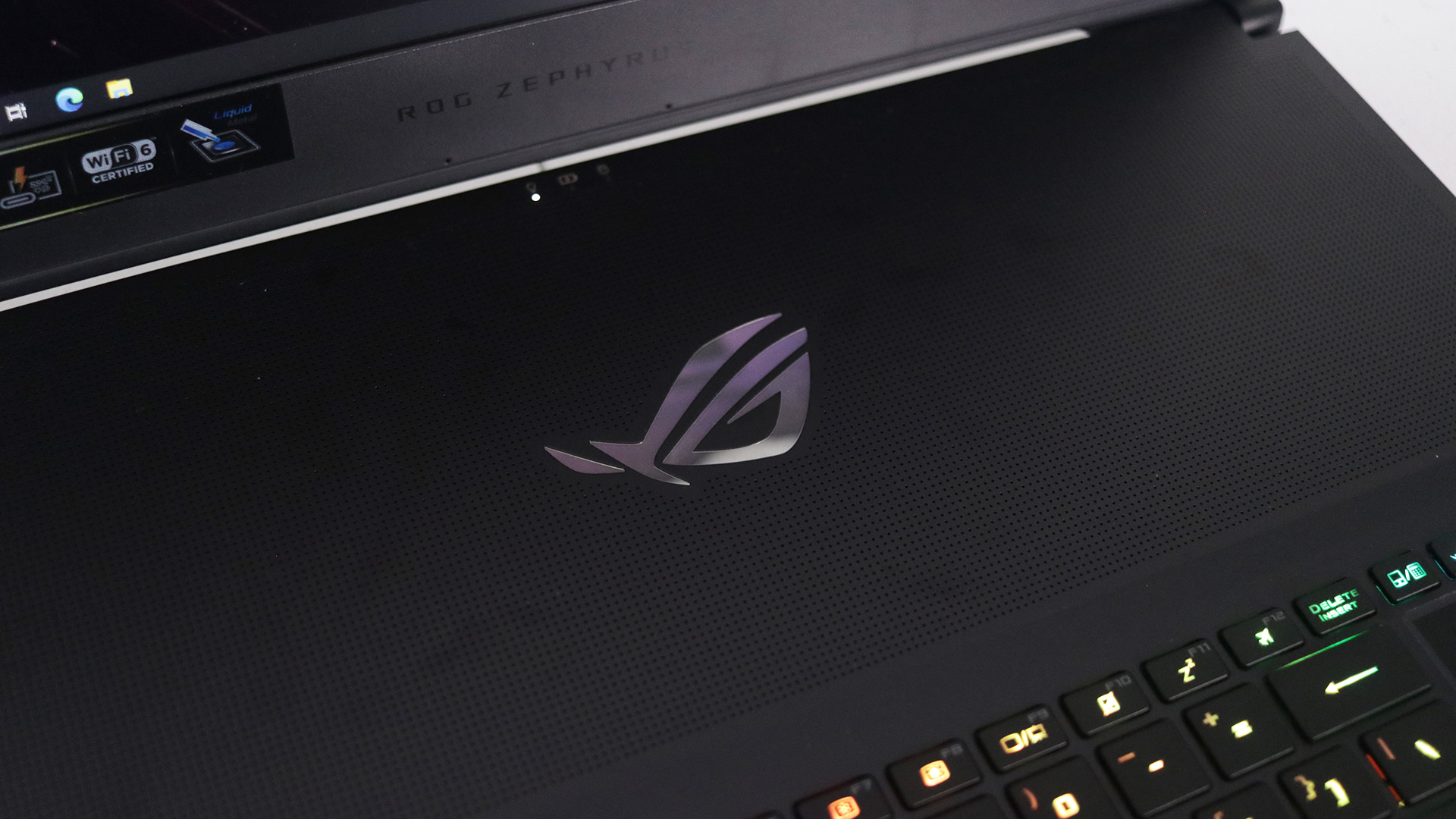 The left-hand side of the GX701LXS is equipped with a power for the power brick, an HDMI 2.0b port, one USB 3.2 Gen 2 Type-A port, one USB 3.2 Gen 2 Type-C, and a 3.5mm combo audio port. The right side features two USB 3.2 Gen 1 Type-A ports, one Thunderbolt 3 port and a Kensington lock. The USB Type-C port on the left-hand side also supports DisplayPort 1.4 for connecting another display (apart from the HDMI 2.0b port) while the Thunderbolt 3 port on the right supports both DisplayPort 1.4 and Power Delivery 3.0 (for the included PD charger).

The GX701LXS provides quite a decent number of ports, allowing for a variety of devices to be connected to the laptop, such as the included ROG Delta headset and the PD charger to the two applicable USB Type-C ports. Having both of the USB Type-C ports support DisplayPort 1.4 also allows the laptop to support up to three additional displays while still being able to support other peripherals such as a mouse, keyboard, and headset via the other USB 3.0 ports and the 3.5mm combo audio jack. 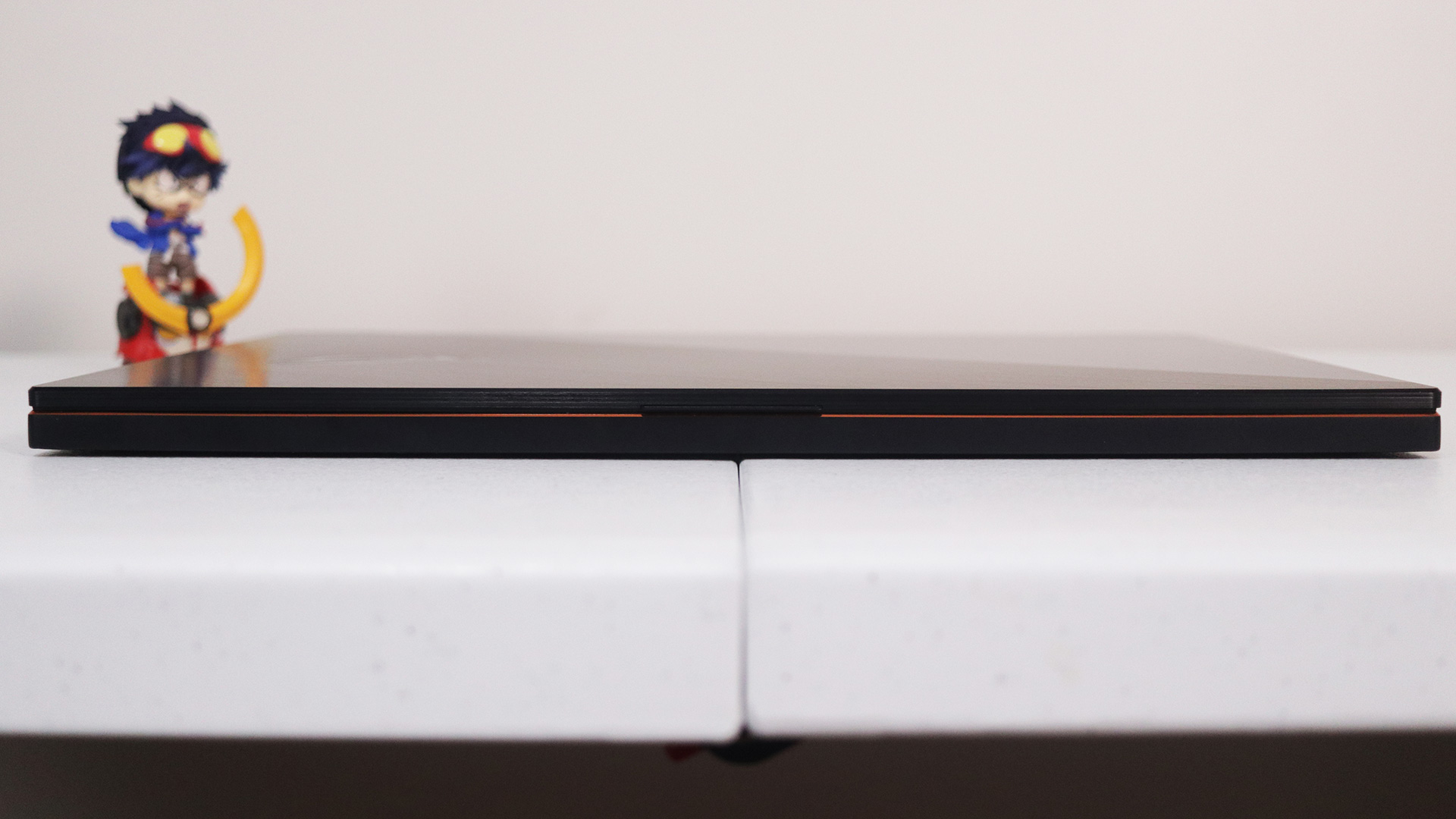 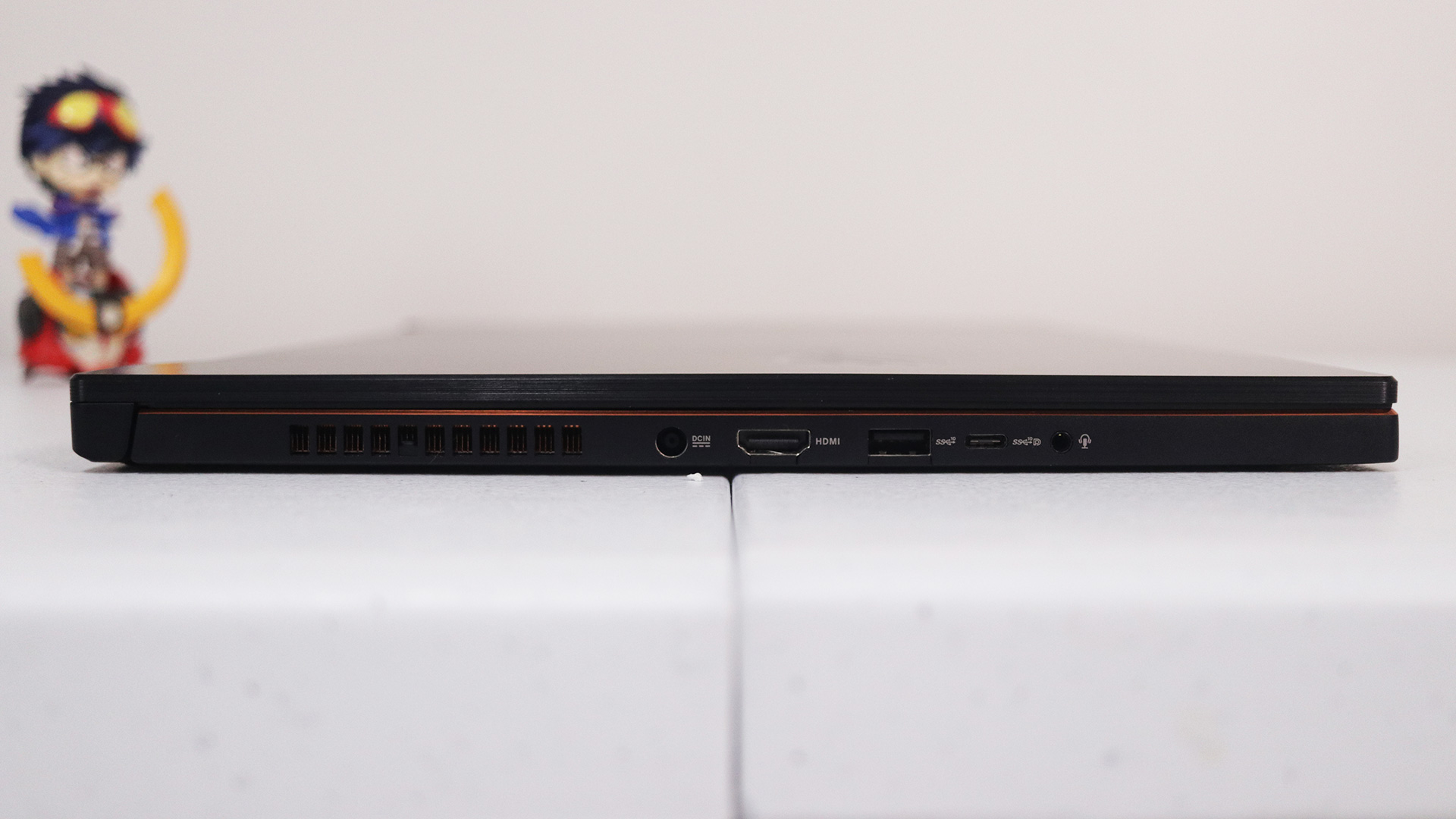 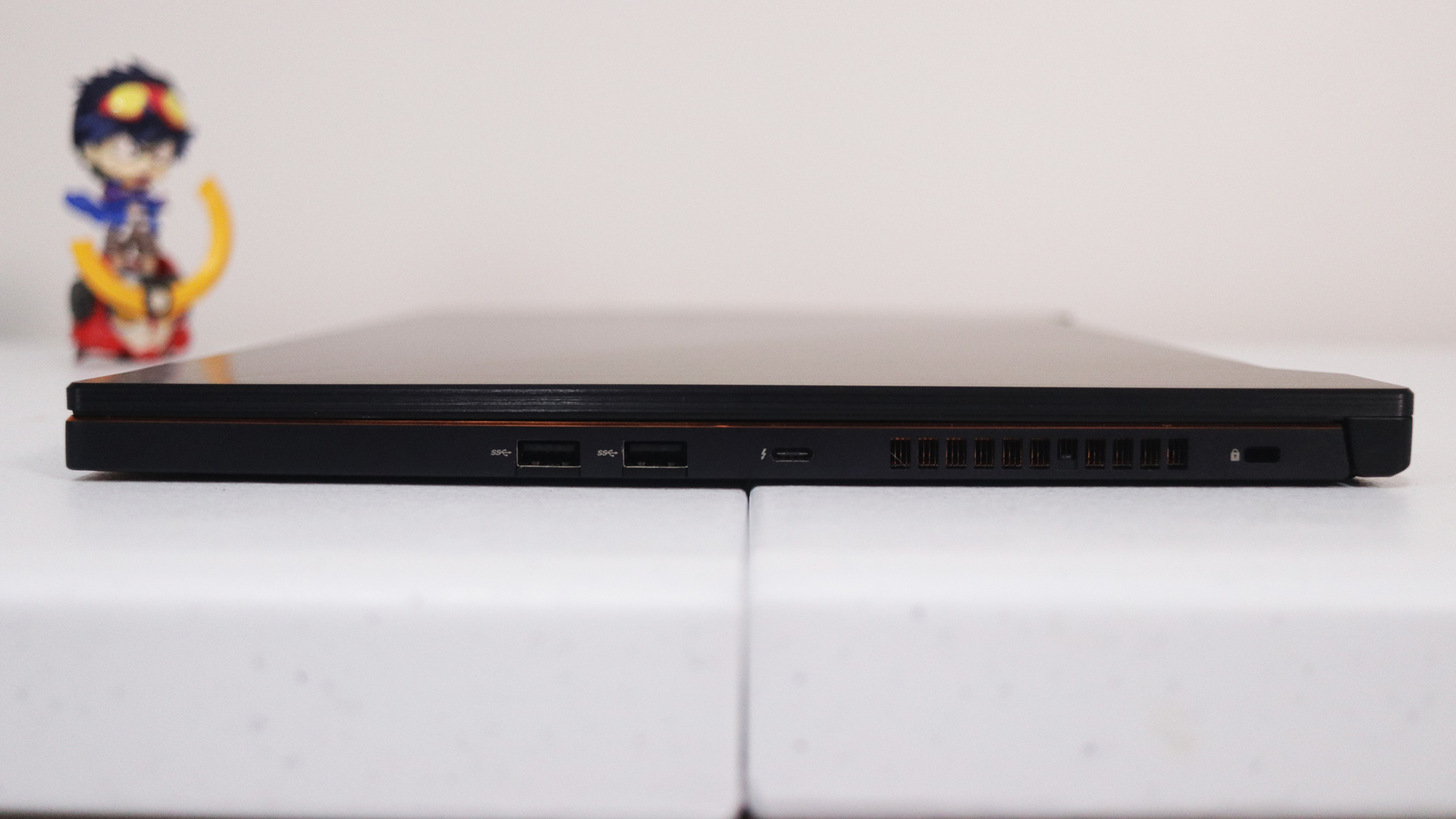 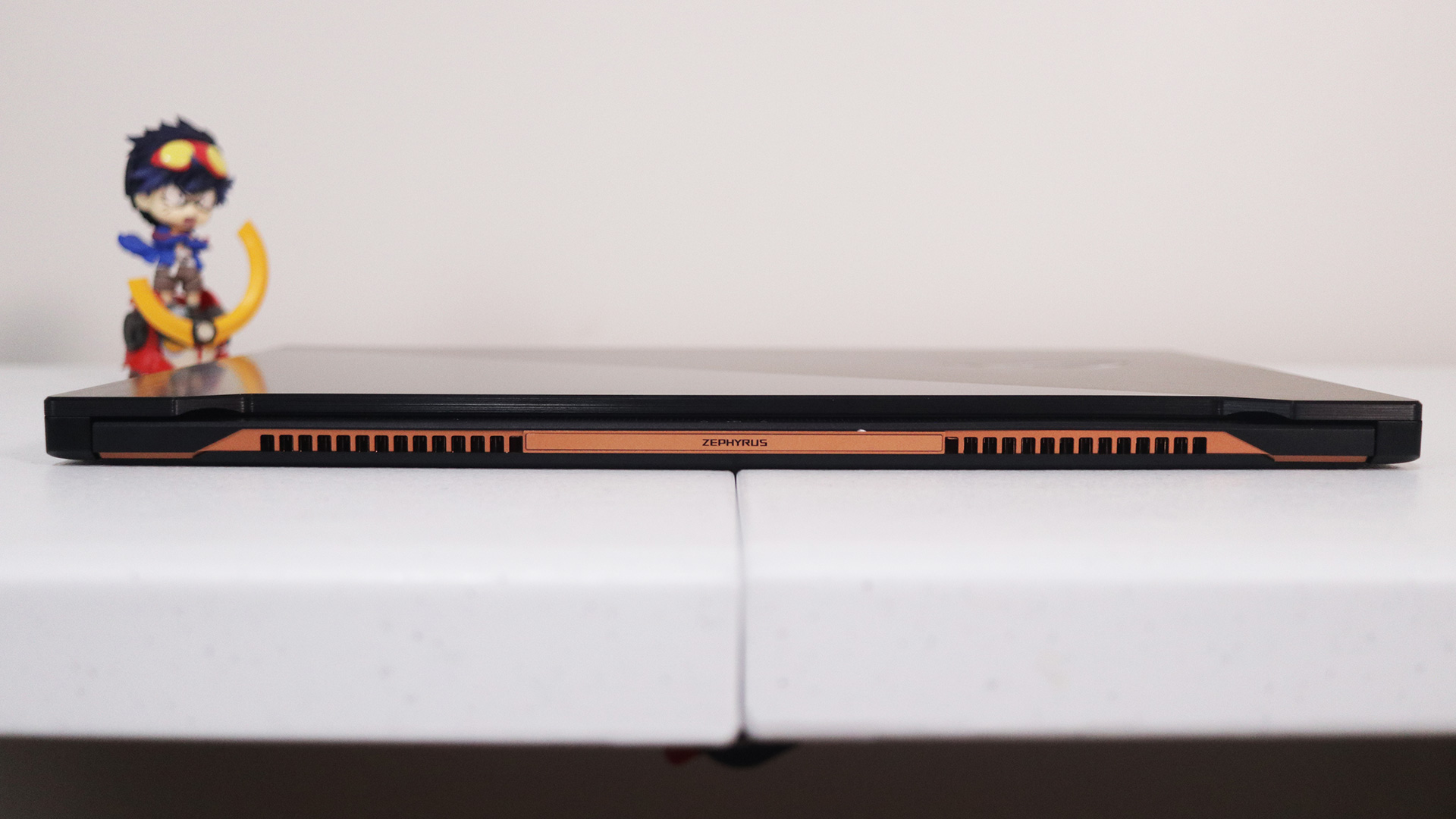 As previously mentioned, the GX701LXS keeps the same forward-positioned keyboard of its predecessors that features chiclet style membrane keys. The keyboard features a smaller, yet still notably separated arrow key block as well as keys that share multiple functions, such as the Home and End functions that share keys with Page Up and Page Down, respectively, as well as the Insert and Delete functions sharing a single key, which isn’t unusual for more compact keyboards. Notably, the Print Screen key is also unusually positioned in between the right Alt and Ctrl keys. 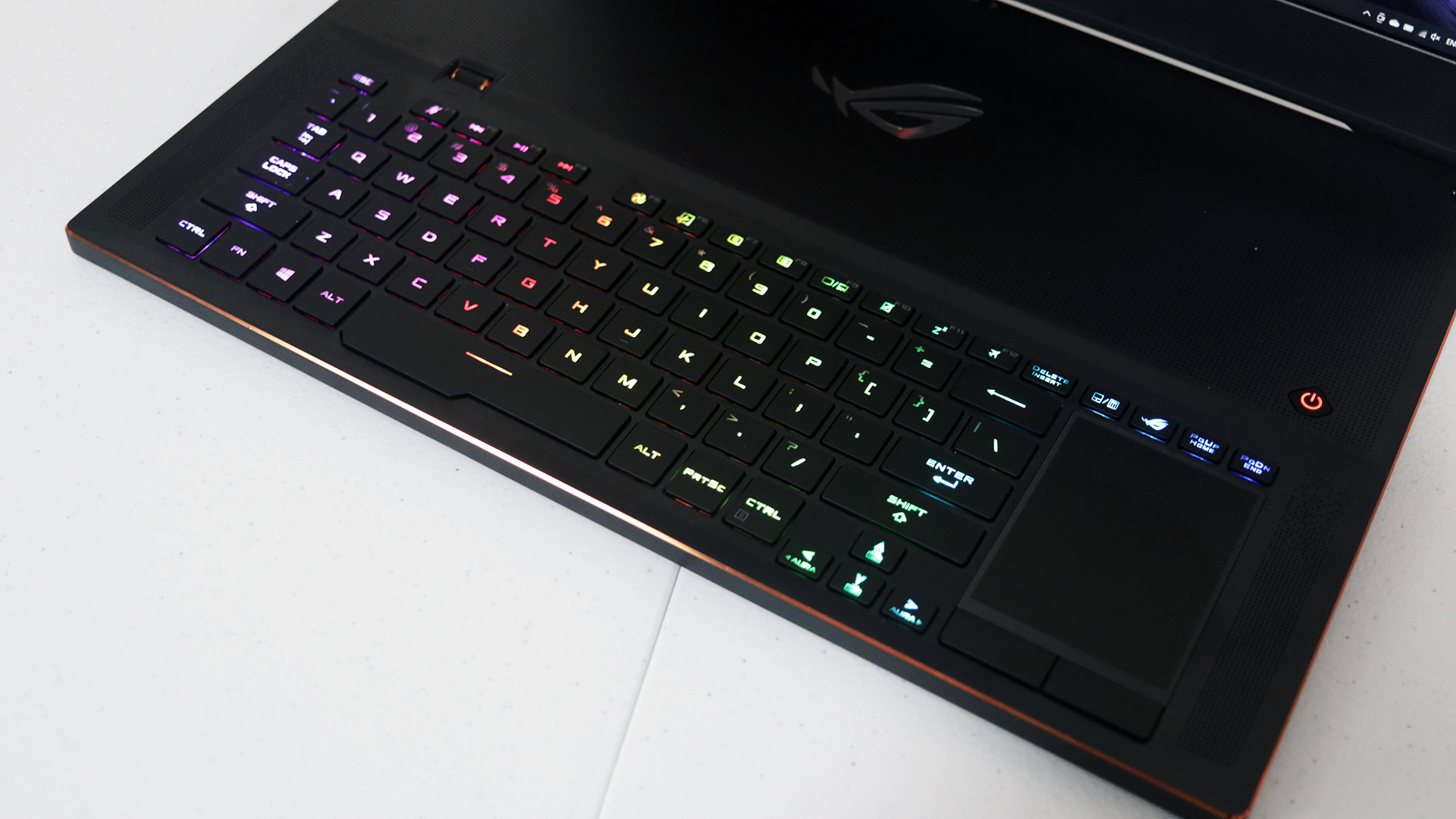 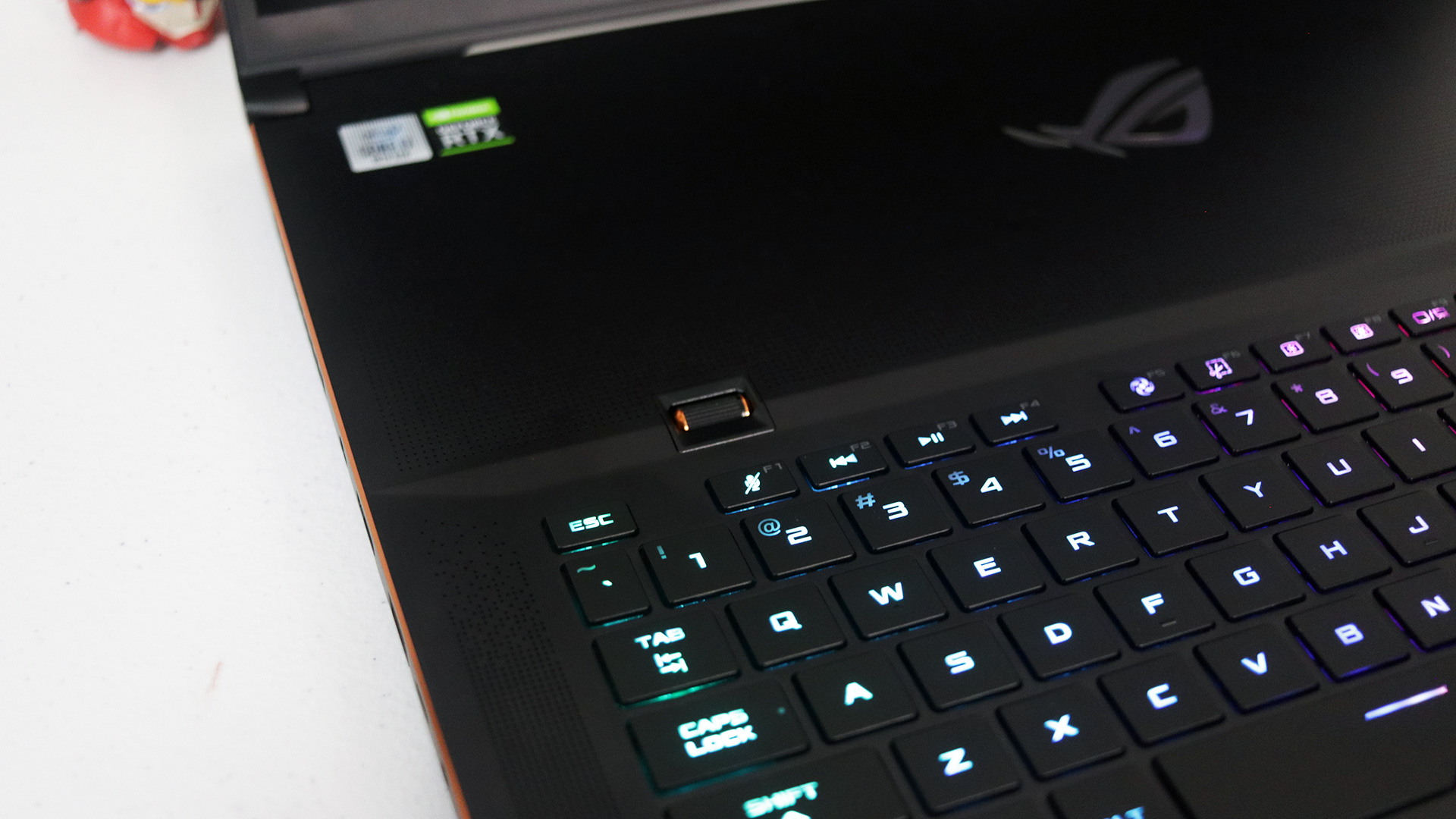 On the right of the keyboard is the touchpad that doubles as the laptop’s numpad, with a dedicated key to switch between the two functions. The touchpad is also accompanied with two large physical mouse buttons. The GX701LXS also features a dedicated volume roller and a key for activating the ASUS ROG Armoury Crate app. While the relative position of the keyboard and touchpad makes sense because of the latter’s secondary purpose as a number pad, it’s clearly more suitable for right-handed users.

The keyboard’s position also makes it slightly difficult to use when the laptop is on your lap as your hands end up relatively much closer to you leading you to angle your wrists more sharply, which can become uncomfortable after a while. The touchpad is also pretty narrow and limits side to side movements. It took some time to get used to the keyboard and touchpad of the GX701LXS, particularly to the smaller arrow keys and the narrow touchpad, but it wasn’t much of an issue after a while. 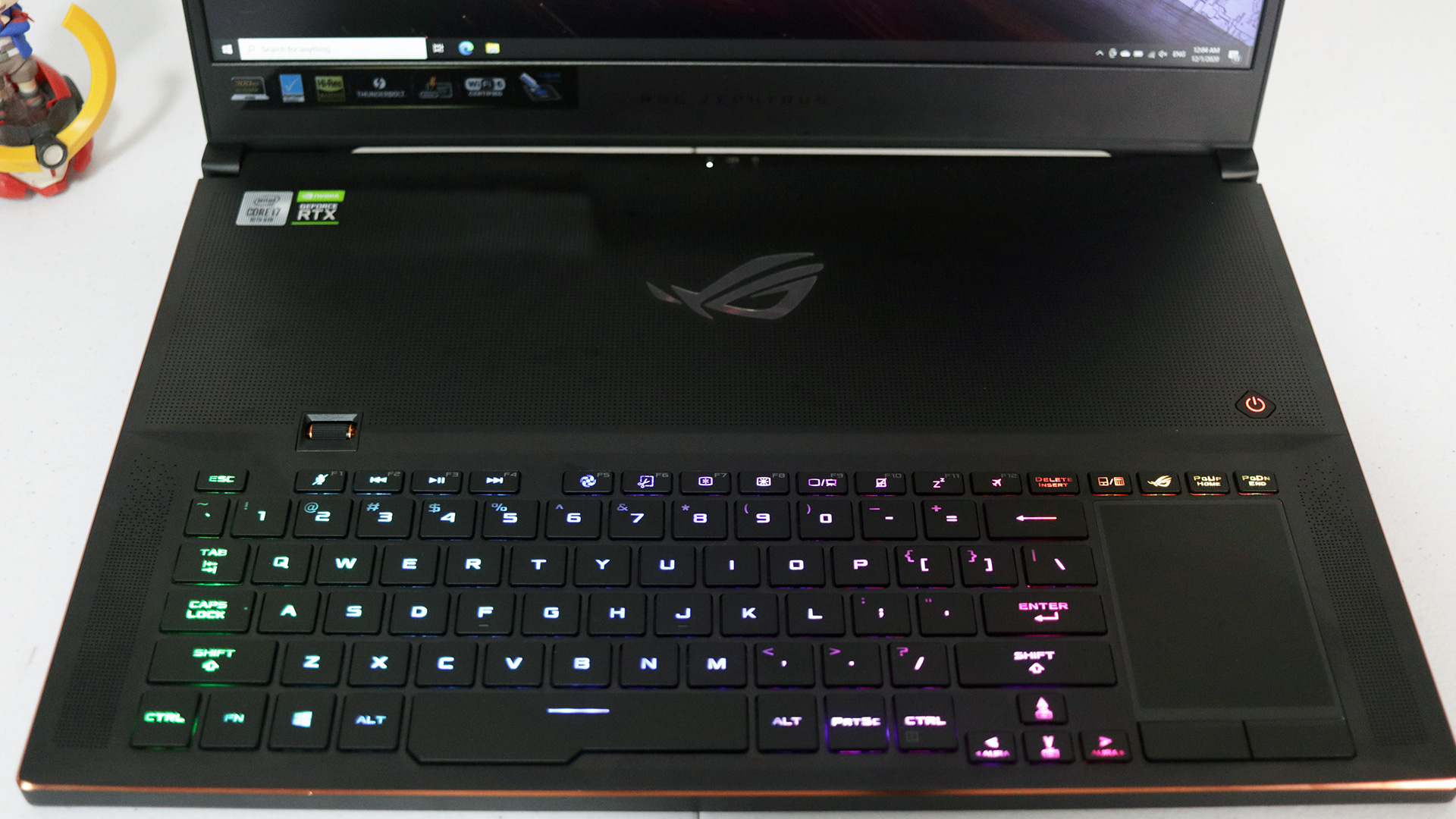 The Zephyrus S17 GX701LXS is equipped with a 17.3-inch screen with a display resolution of 1920 x 1080 pixels, a 3ms response time, and a refresh rate of 300Hz. According to ASUS, it uses an IPS-level panel that covers 100% of the sRGB color space. Unfortunately, with our current testing capability, we’re unable to fully determine the exact performance of the display’s colors and brightness. Regardless, the colors and brightness of the GX701LXS’s display panel are both pretty adequate for gaming, although the maximum brightness of the panel was still too low to completely cancel out any glare from opposing light sources. 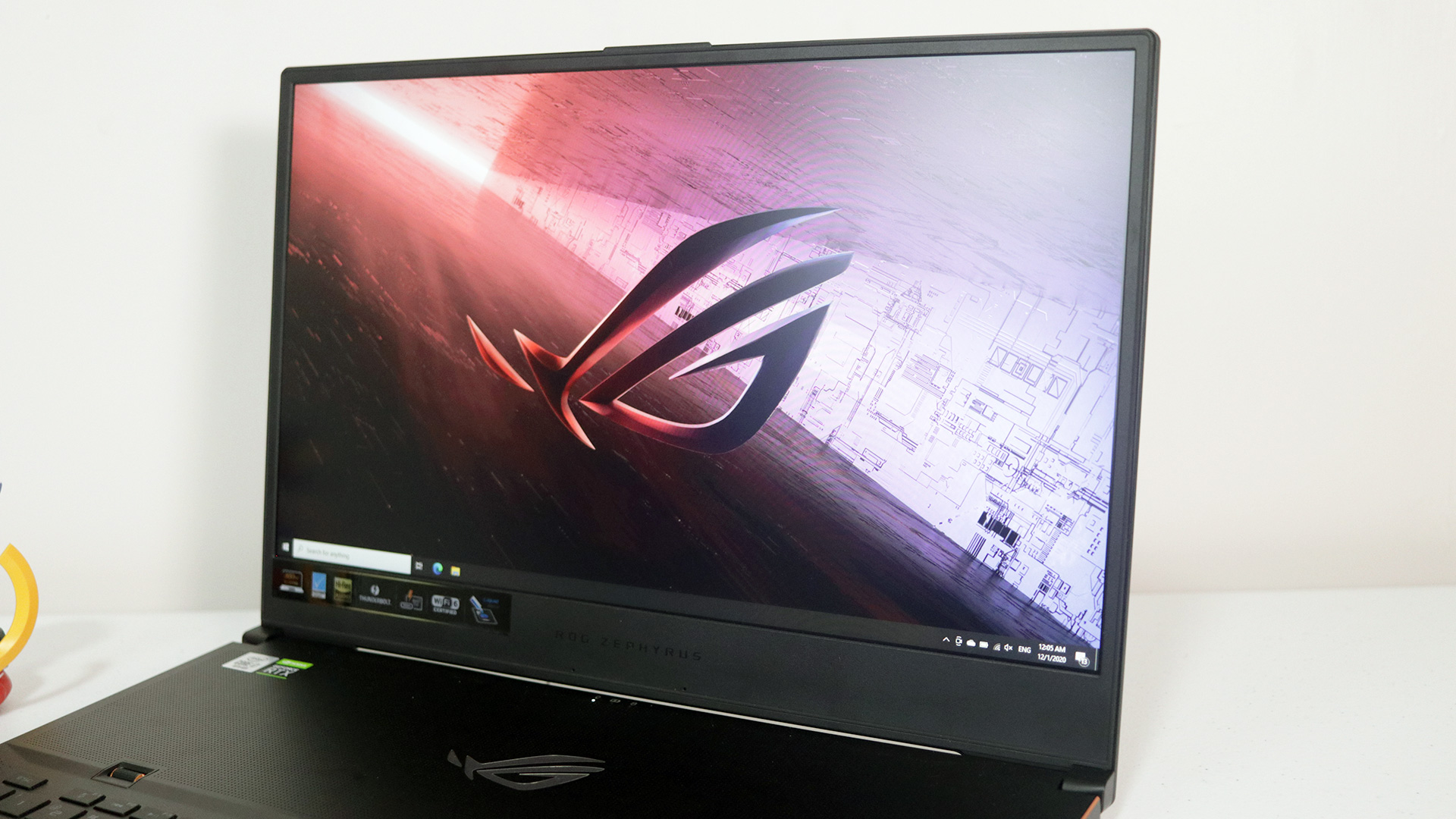 As for its 300Hz refresh rate, we visually tested the feature using Blur Busters’ UFO and Video Game Motion demos and saw a significantly clear difference between 60Hz and 300Hz that would easily benefit users who play titles that are able to reach higher frame rates on the GX701LXS. The higher refresh rate practically eliminated the motion blur that may be caused by quick camera scrolling or movements in games such as DOTA 2 and League of Legends.

The viewing angles of the GX701LXS also proved to be pretty decent, especially in low light environments where the display’s brightness is maximized. 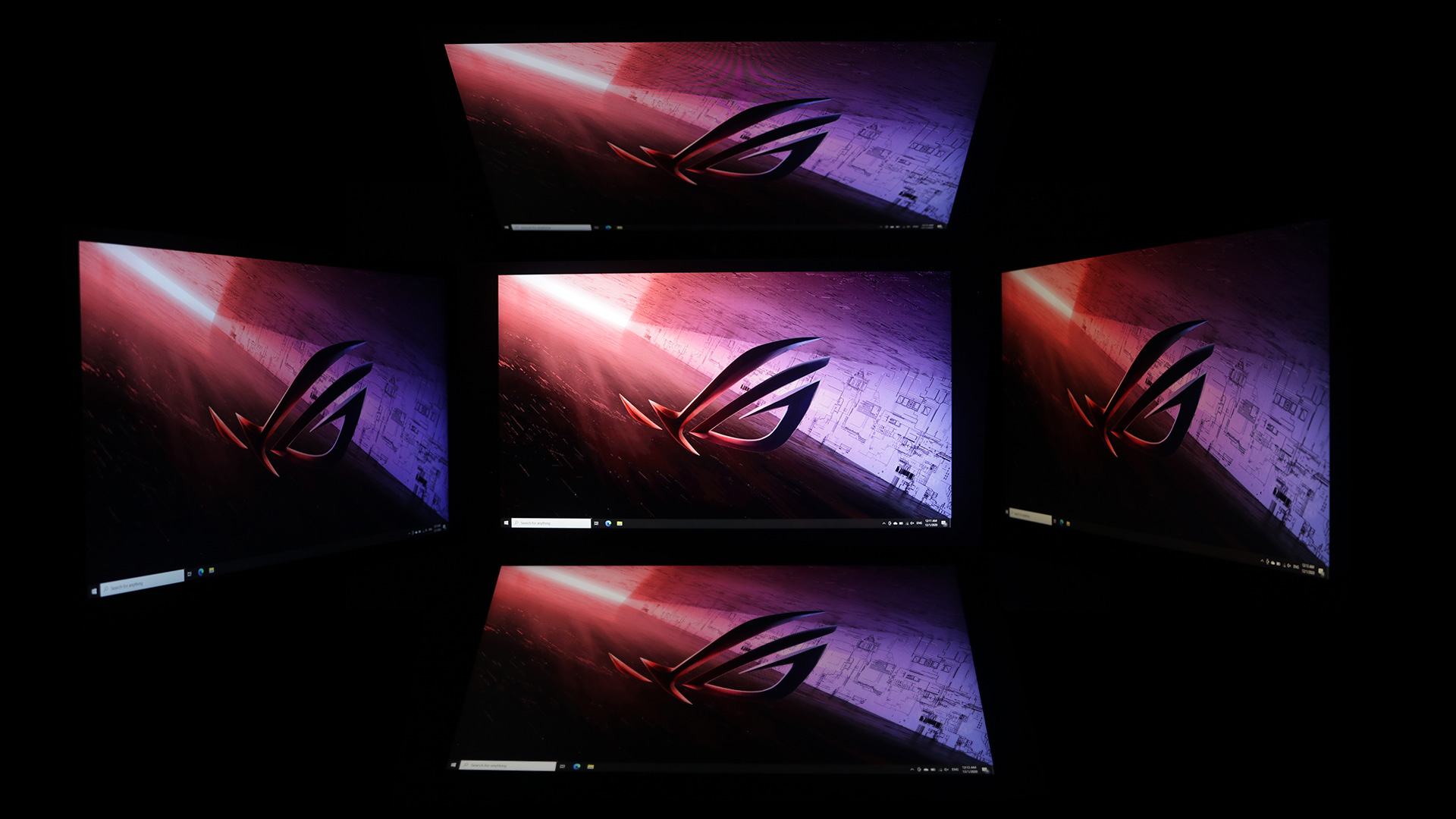 The Zephyrus S17 GX701LXS is equipped with an Intel Core i7-10875H processor coupled with an NVIDIA GeForce RTX 2080 SUPER GPU, which were the biggest changes with this new model. It also sports 32GB of DDR4 RAM running at 3200MHz. 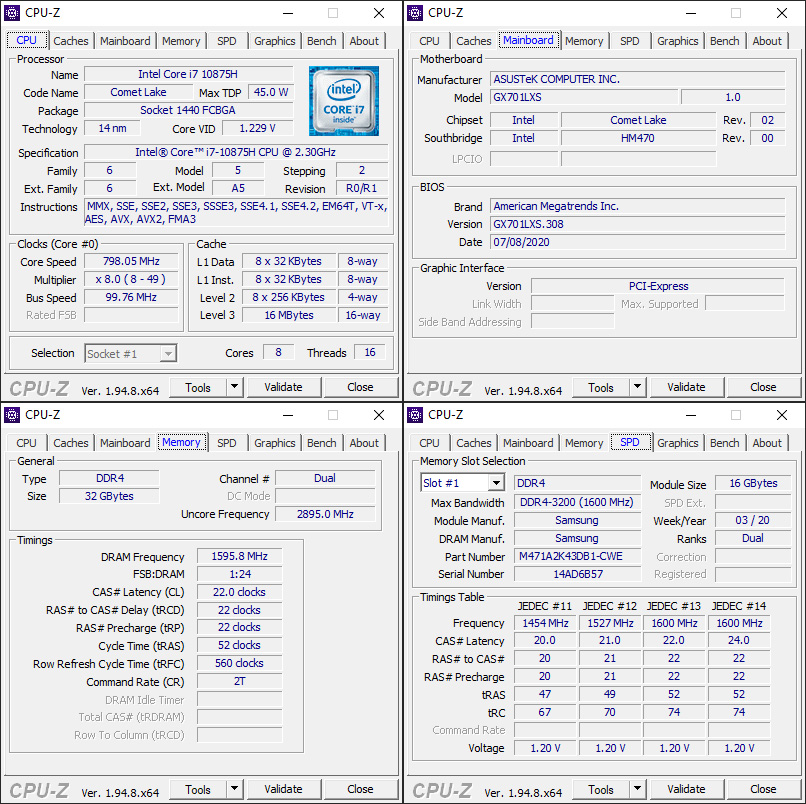 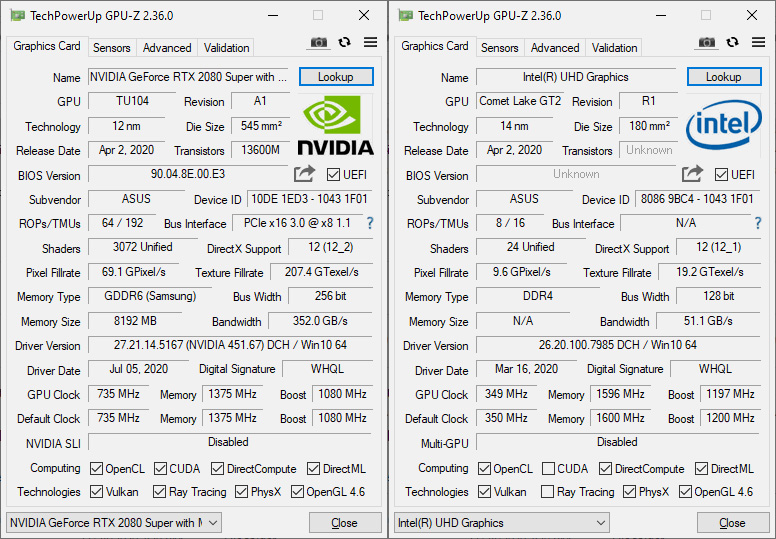 We ran the Zephyrus S17 GX701LXS through our usual array of benchmark tests to determine the performance of its internal components such as its CPU, GPU, and storage. While the RAM and SSD of the GX701LXS can technically be replaced or upgraded, we wanted to find out its performance out of the box, especially considering how relatively more difficult it is to open up the laptop and access the RAM and SSD slots. We also conducted our tests with the laptop plugged in as well as on battery to see how well it’s able to perform in both use situations.

Our benchmark tests included the following: 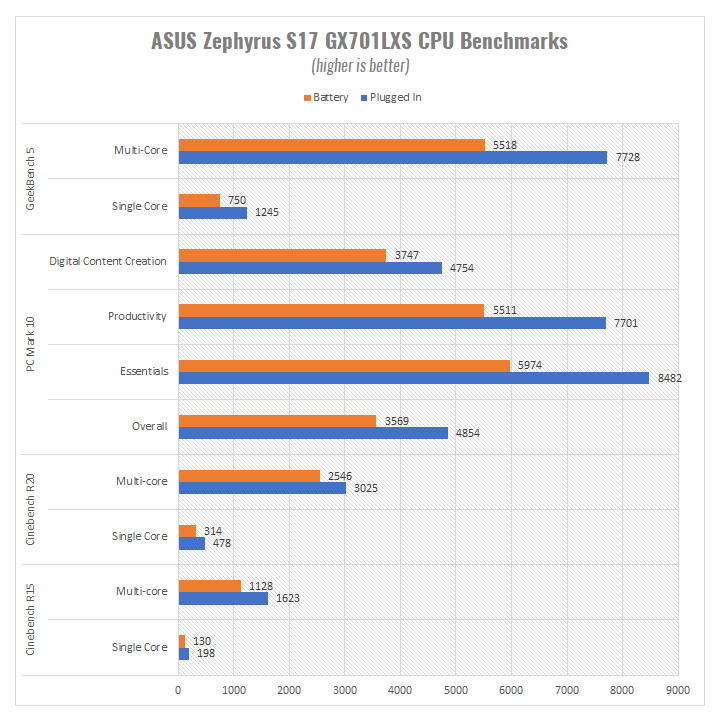 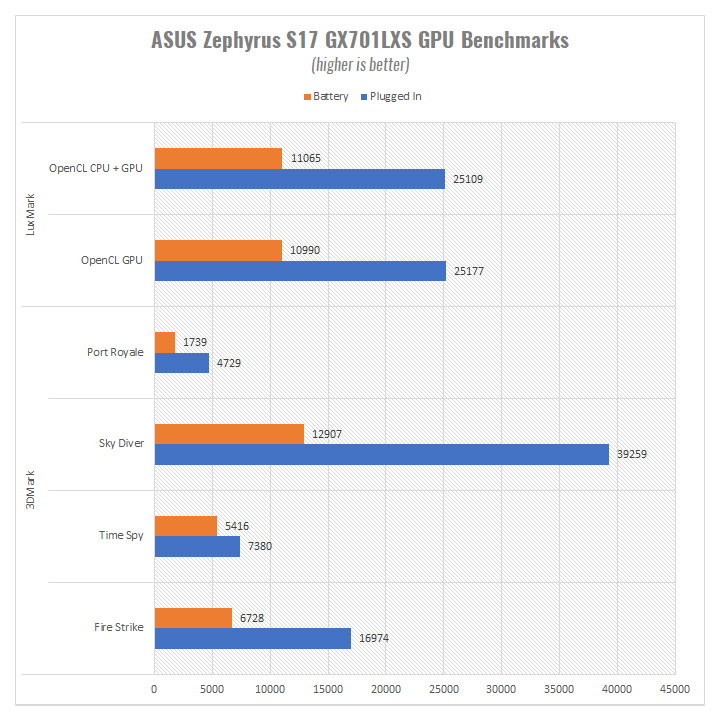 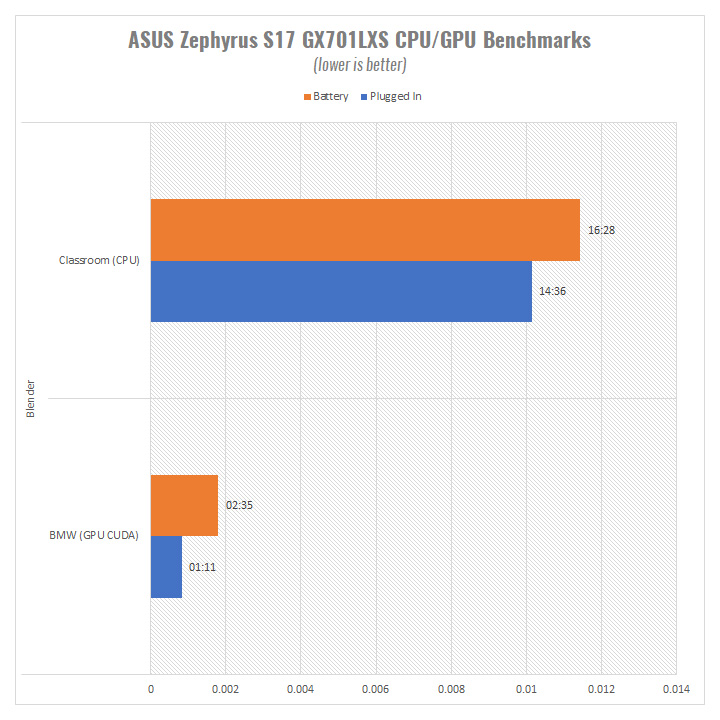 We also ran the GX701LXS through several built-in game benchmarks at different graphical quality settings to test its gaming performance including: 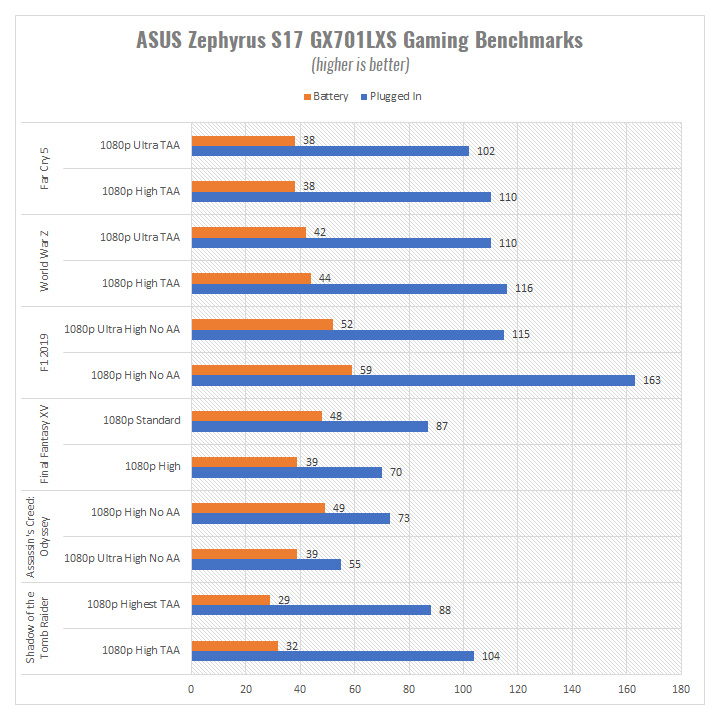 We were pretty impressed by the performance of the GX701LXS overall. It was able to pretty much breach the 60 FPS mark, with some going above 100 FPS, on most of our gaming benchmarks. Although, the difference in performance when in battery mode is pretty staggering, especially when it comes to gaming performance, so gaming on the GX701LXS is definitely recommended only when the laptop is plugged in.

The M.2 NVMe PCIe SSD that ASUS used for the GX701LXS is the 1TB variant of the Samsung PM981a (MZVLB1T0HBLR), which performed decently enough especially in both random and sequential write operations. 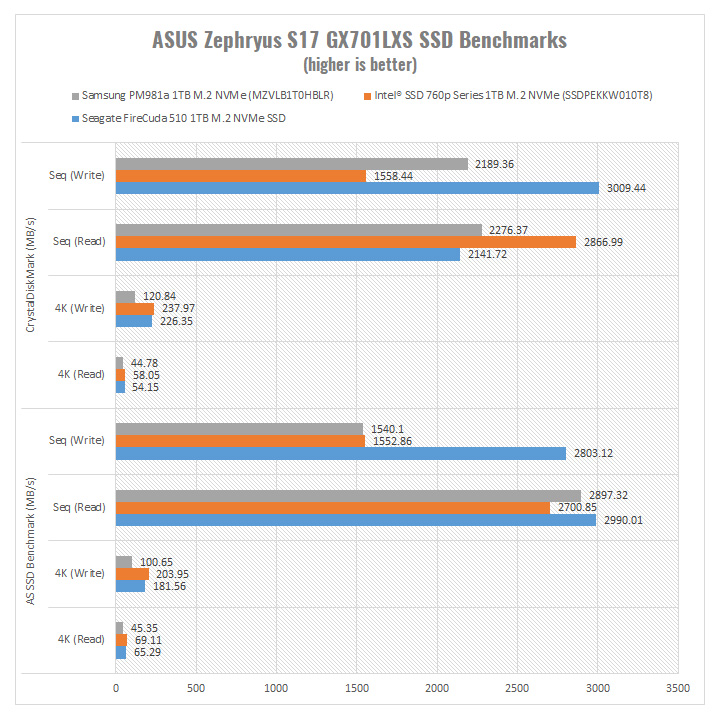 We monitored the temperature of both the CPU and GPU of the GX701LXS when idle as well as during our benchmark test with an ambient room temperature of 29.6C and we’re fairly impressed by how the GX701LXS was able to maintain temperatures to a reasonable ceiling, which is probably helped by both the Thermal Grizzly liquid metal compound ASUS used on the CPU as well as the ROG Active Aerodynamic System (AAS). The position of the keyboard and the touchpad also helped keep both from heating up and being uncomfortable to use. 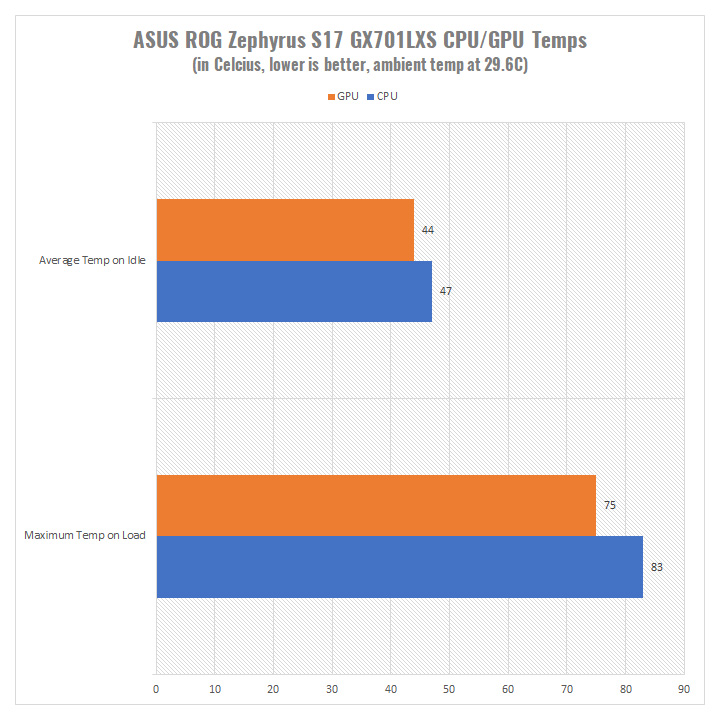 The fans of the GX701LXS also performed decently, only reaching a loudness of 28.2dB on idle and 30.5dB when the fans were running loud during our stress test with an ambient noise level of 26.6dB. The sound of the fans, even on load, isn’t too bothersome considering that the speakers on the GX701LXS can reach a loudness of 65.2dB when set to full volume.

Lastly, the battery life of the GX701LXS unfortunately is one of its weaker points as it only lasted about 2 hours on heavy load and around 4 hours on idle. On the other hand, the laptop only took 2 hours to charge with the larger charging brick and about 3 hours with the smaller PD charger. 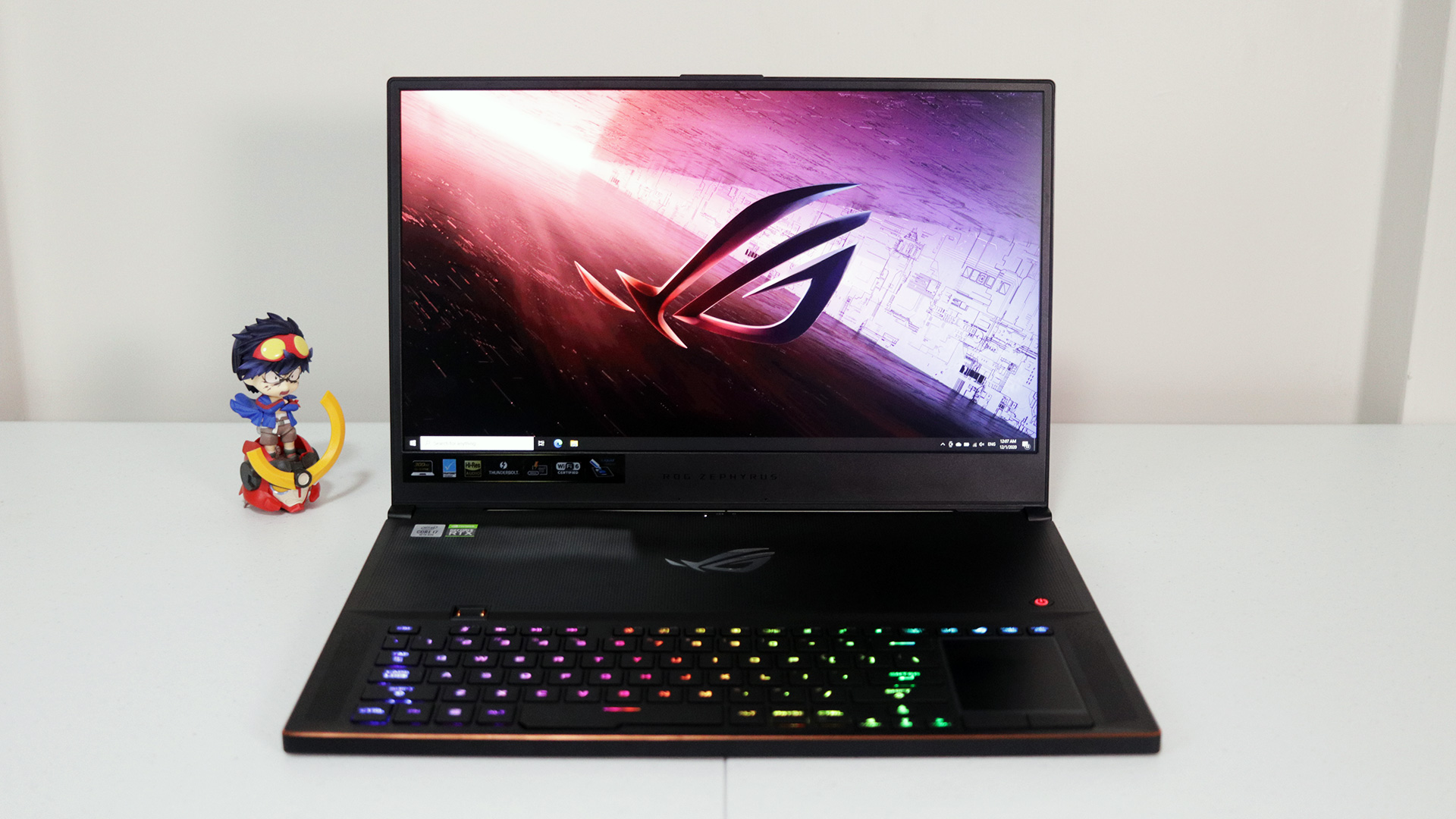 The ASUS Zephyrus S17 GX701LXS is definitely an impressive laptop in both design and performance. While some of its design elements, particularly the keyboard and touchpad as well as the raised bottom panel, make it somewhat less wieldy, its thin and light body, build quality, and performance easily makes up for those. And even though its price tag is undeniably high at PHP 209,995, the upgrades and additions to this release, in both its internal components and included peripherals and accessories, make it a significantly much better value than last year’s model. Those who can afford the hefty price of the GX701LXS will definitely not be disappointed at what the laptop itself as well as the package it comes with offers.