We currently live in a market where a large part of the people who play video games do so on-the-go. Due to the rise of mobile gaming and the success of the Nintendo Switch, the need for peripherals designed for portability and versatility has definitely grown. Several manufacturers have already released products designed specifically for use with smartphones and the Switch. One of the latest examples of this is the new ASUS ROG Strix Go 2.4 wireless gaming headset, which is designed to be used with almost any gaming platform available.

Whether you have a Switch, a desktop PC, a laptop, or even a PlayStation 4, ASUS has designed the ROG Strix Go 2.4 to be compatible with all of them in more than one way, making it one of the most versatile gaming headsets we’ve checked out so far. Primarily, the headset utilizes its included USB Type-C receiver which it connects to via the 2.4 GHz band, hence the number in its name, which removes the usual issue with latency that happens with wireless headsets that use Bluetooth. 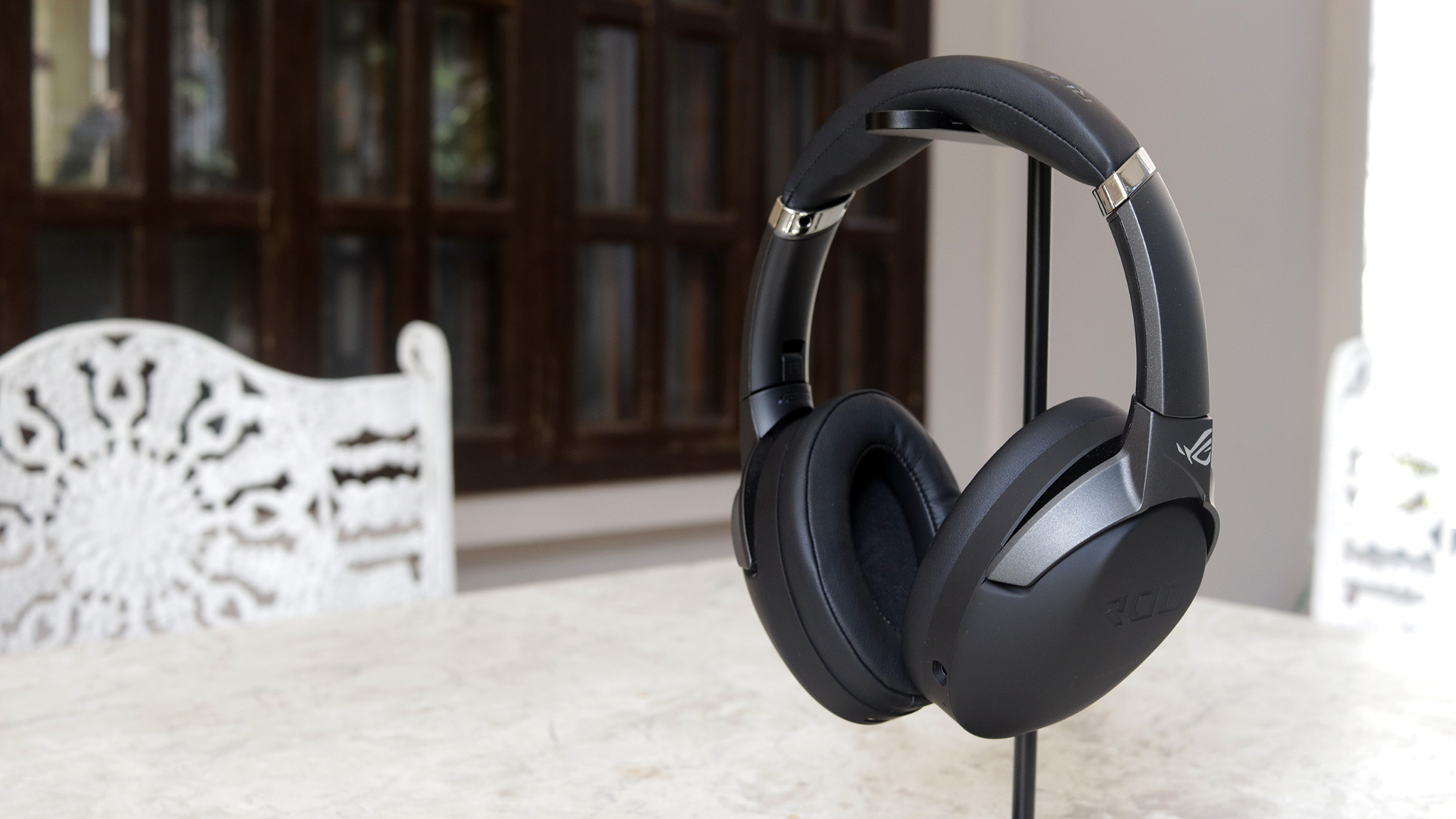 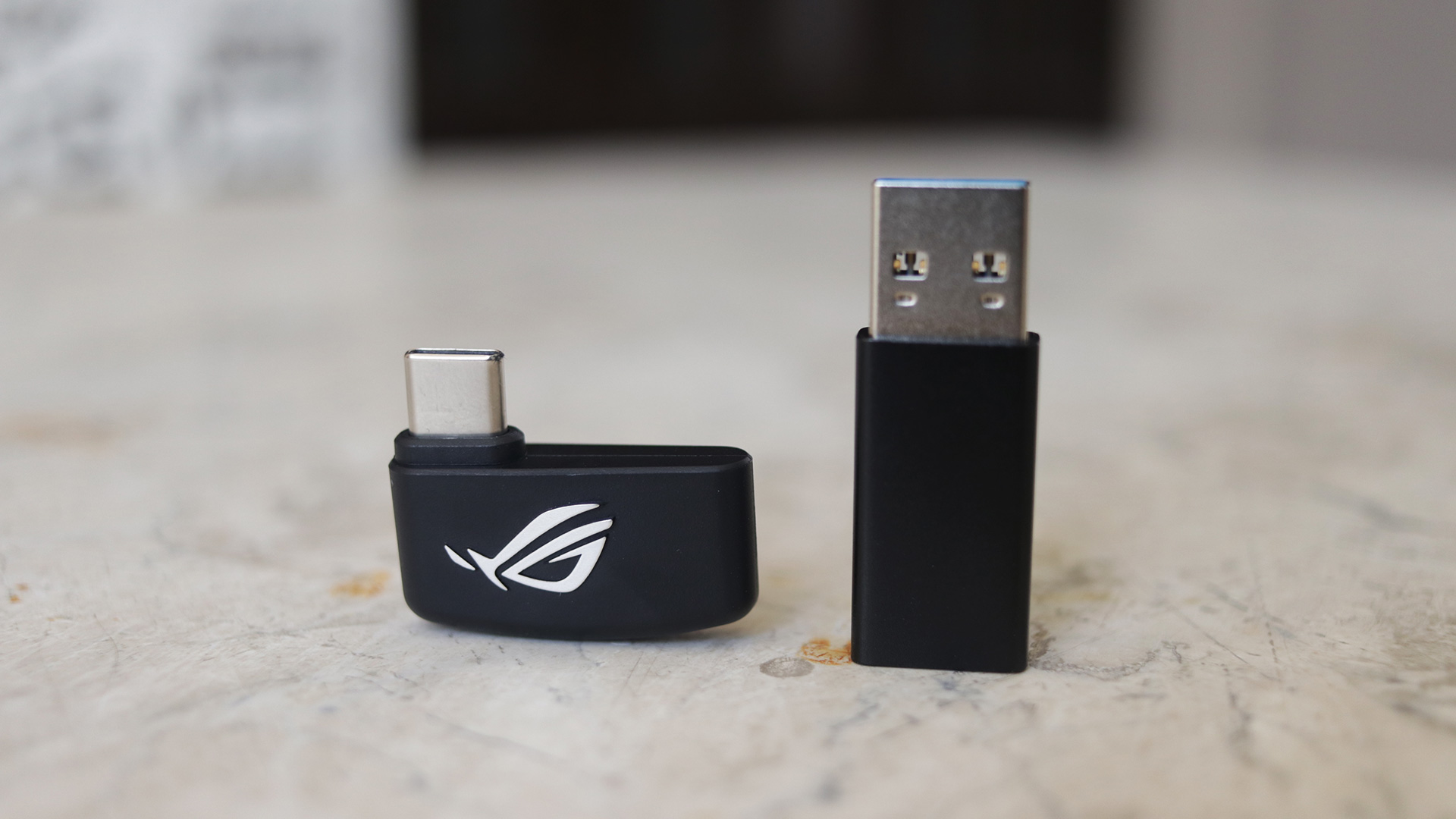 The USB Type-C receiver of the Strix Go 2.4 features a right-angled connector, which allows it to sit closer to the device, like the Switch, and reduce the chance of it getting snagged and breaking in the process. Using the receiver with a PS4 as well as some PCs and laptops will require the use of its included USB Type-C to Type-A adapter. While adding the adapter does increase the receiver’s total footprint significantly, it really doesn’t become an issue since your PS4, PC, or laptop is usually stationary (and hopefully in a safe and stable position) when in use.

Like most wireless gaming headsets, the Strix Go 2.4 also comes with a 3.5mm audio cable for use with the headset’s corresponding audio port, which allows it to still be used with devices that don’t support the headset’s wireless receiver or when the headset is low on battery. The headset’s wired mode also enables it to output “Hi-Res audio” for those who enjoy listening to lossless audio. It must be noted though that the 3.5mm audio cable terminates to a single 3.5mm combo jack on both ends so you’ll have to get a splitter cable if you wish to use it with a desktop PC or laptop with separate output and mic ports. 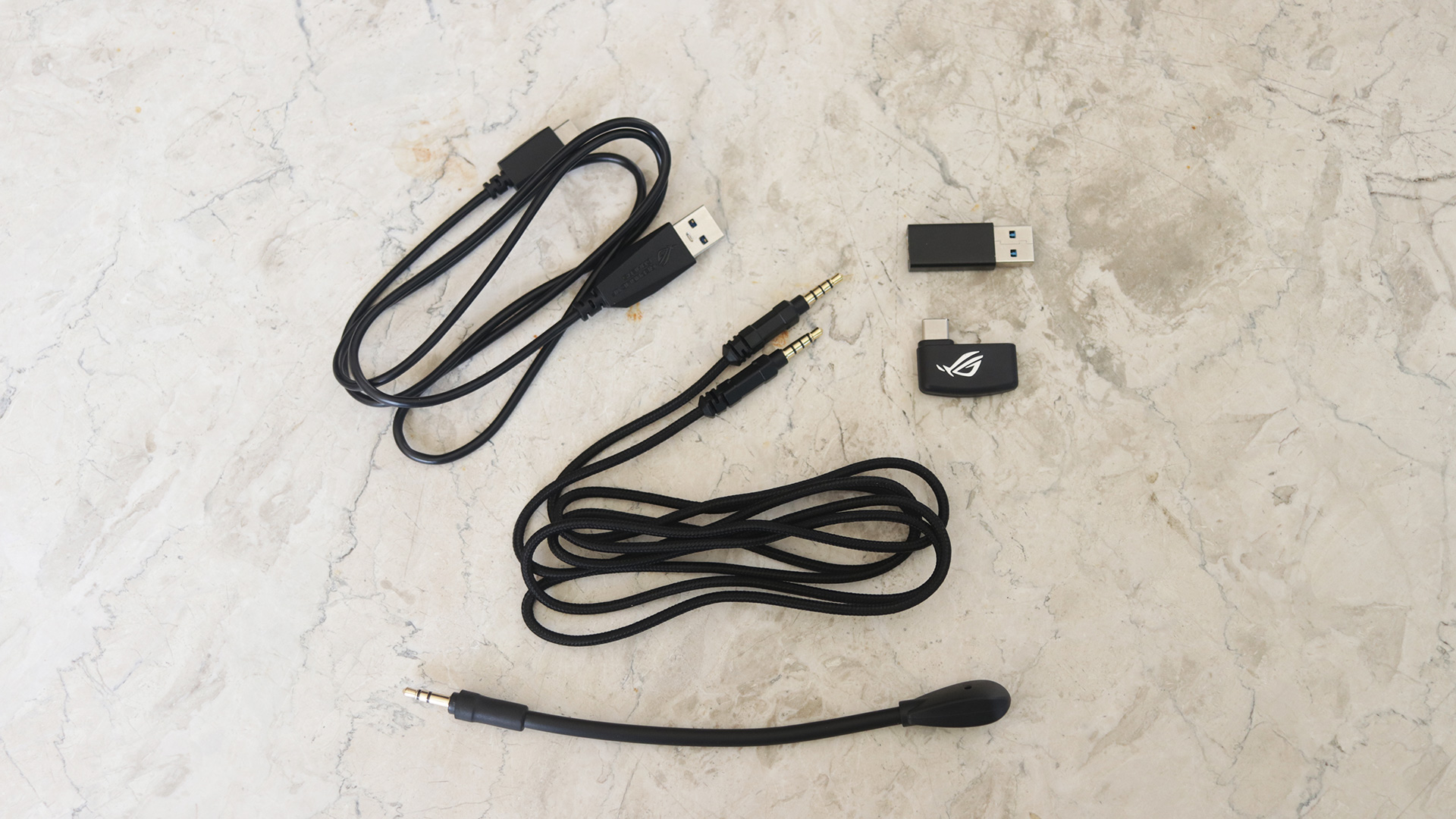 Lastly, the charging cable for the Strix Go 2.4 is a USB Type-C to USB Type-A cable, allowing it to be easily plugged into many desktop PCs, laptops, or USB charging adapters.

The Strix Go 2.4 and its accessories come in a hard carrying case that’s equipped with a hard foam insert that snuggly fits the headset and its USB Type-C receiver. The case also features elastic bands and a pocket to hold the included cables, detachable boom microphone, and USB Type-C to USB Type-A adapter. The hard case allows the user to transport the headset and all its accessories in a single container and given how small some of its accessories are, specifically the USB receiver and adapter, it’s a very welcome inclusion to the package. 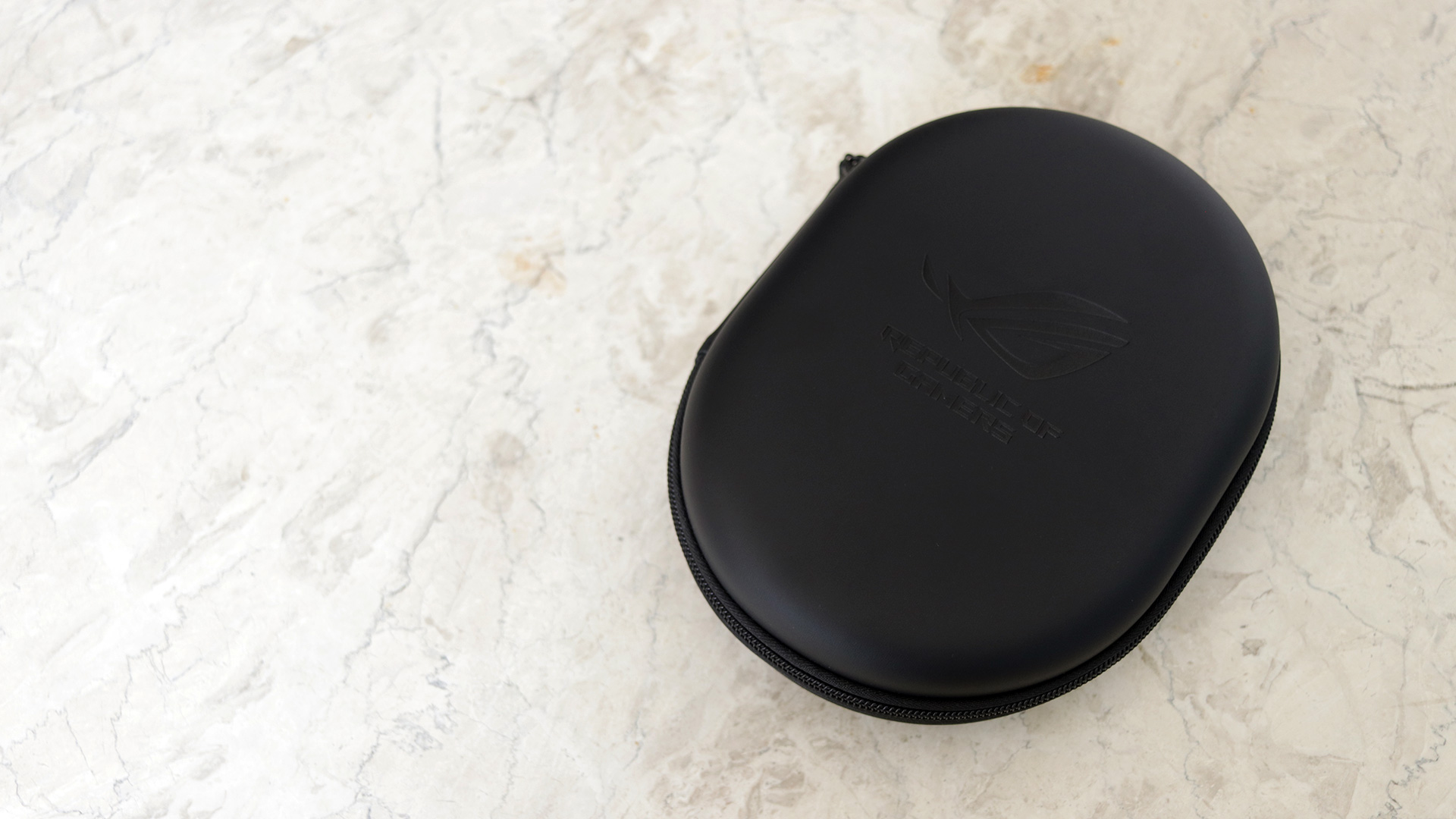 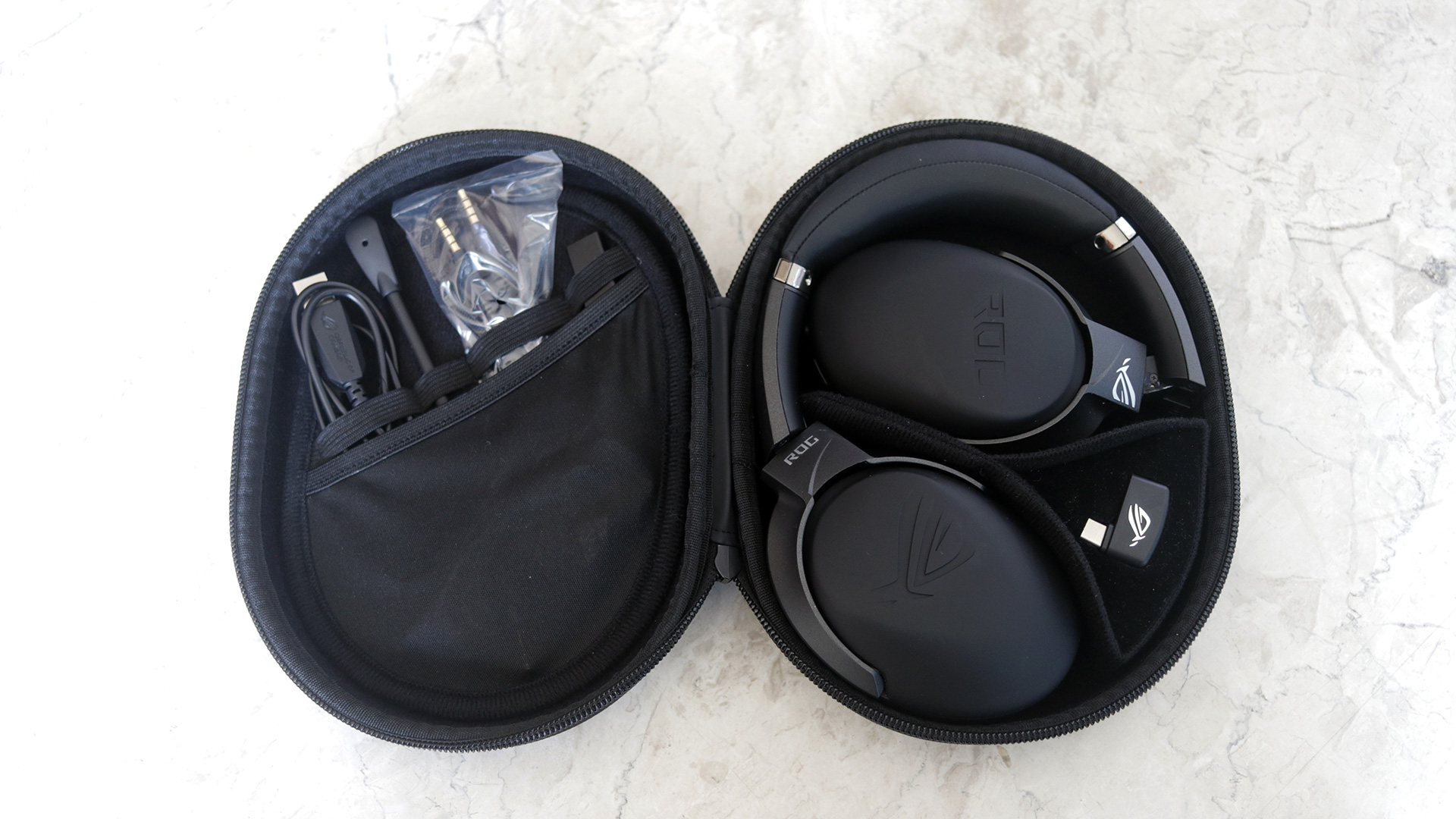 The Strix Go 2.4 features a simple and muted design that’s quite a departure from the company’s usual shiny and RGB-laced headsets. While it does have a similar silhouette to the company’s Strix Fusion series headsets, the Strix Go 2.4 has a much simpler design and form factor. The earcups feature a matte dark grey, soft touch plastic exterior coupled with black leatherette foam ear pads. Even the branding on the Strix Go 2.4 is muted, with only the ROG logo and monicker engraved on the earcups and printed white on the earcup yokes.

The earcups of the Strix Go 2.4 are able to tilt up and down slightly while the earcup yokes  are capable of swiveling up to 90-degrees, so they can be laid flat on a table, and can also be folded inward for storage. The earcup yokes and the lower parts of the headband come in a similar matte dark grey as the earcups, minus the soft touch texture, and can extend out to adjust the fit of the headset. Extending the headband reveals its inner core that consists of a metal band and a thicker plastic band for additional reinforcement and rigidity. 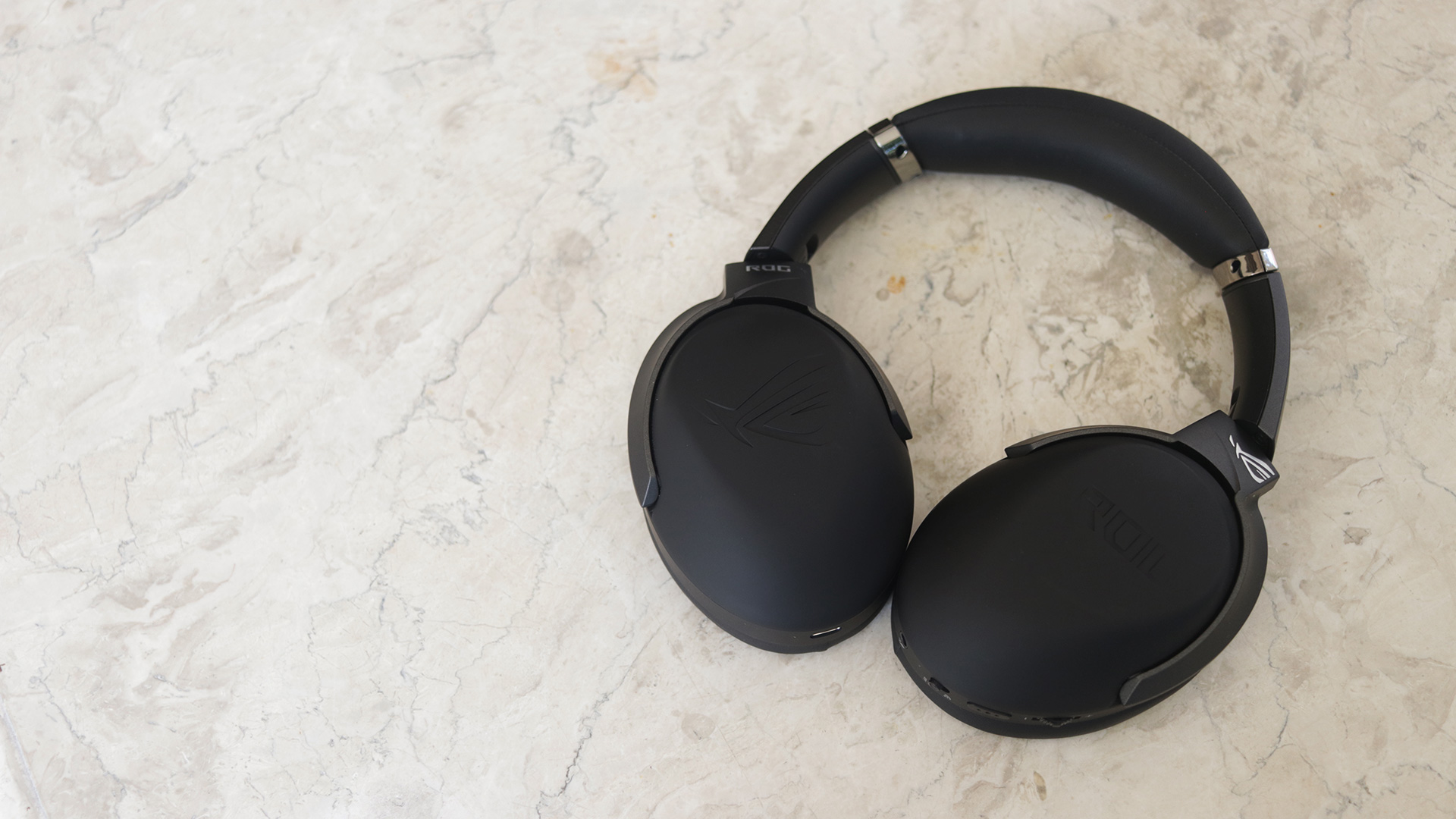 The rest of the headband is wrapped in thick dark grey leatherette-covered foam padding with chrome-colored clips at the end. The padding on the headband and earcups are more than a centimeter thick and are stiff enough to be comfortable while keeping your head and ears away from the metal inner band and drivers, respectively.

While most of the headband is made from plastic, including its folding hinge on the earcup yoke, the Strix Go 2.4 still felt sturdy and has a good balance between flexibility and rigidity. But with any peripheral that is mostly made from plastic, it should still be handled with some amount of care. The flexibility of the headband helps in making the clamping force also reach a good balance between a secure fit and comfortability. The Strix Go 2.4’s design, materials, and weight of only around 290 grams all combine to make it a very comfortable headset. I was able to use it for almost an entire day without feeling any fatigue on the top of my head and around my ears. 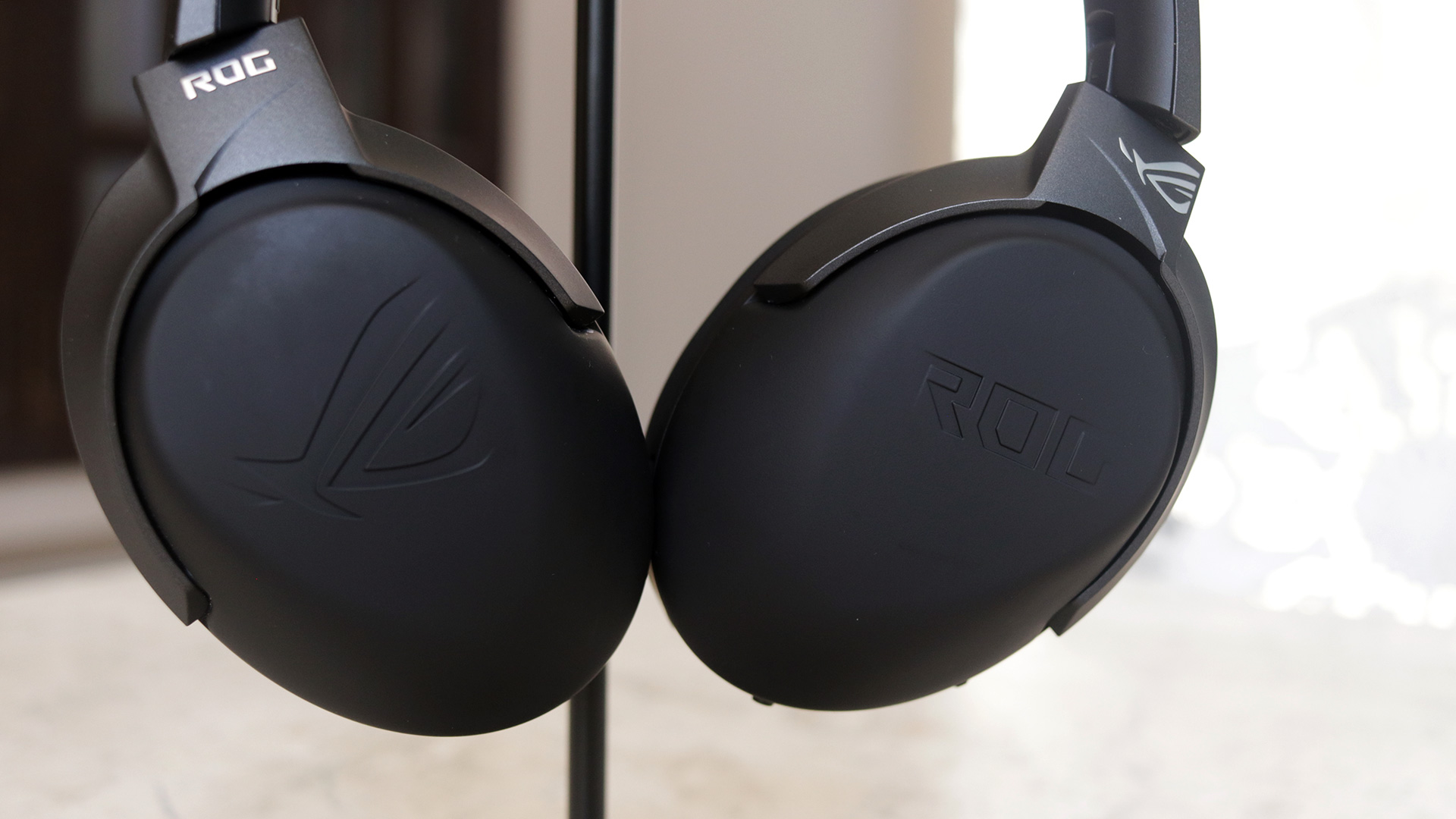 Like many gaming headsets in the market today, the Strix Go 2.4 features several ports and controls along the edge of its earcups. The right earcup features the headset’s USB Type-C port and indicator light while the left earcup has the volume wheel that also acts as the microphone mute button, the wireless and wired/off mode switch, the 3.5mm port, and the port for the detachable microphone. The left earcup also features a multi-function button that can control your media playback depending on the number of times it’s pressed. 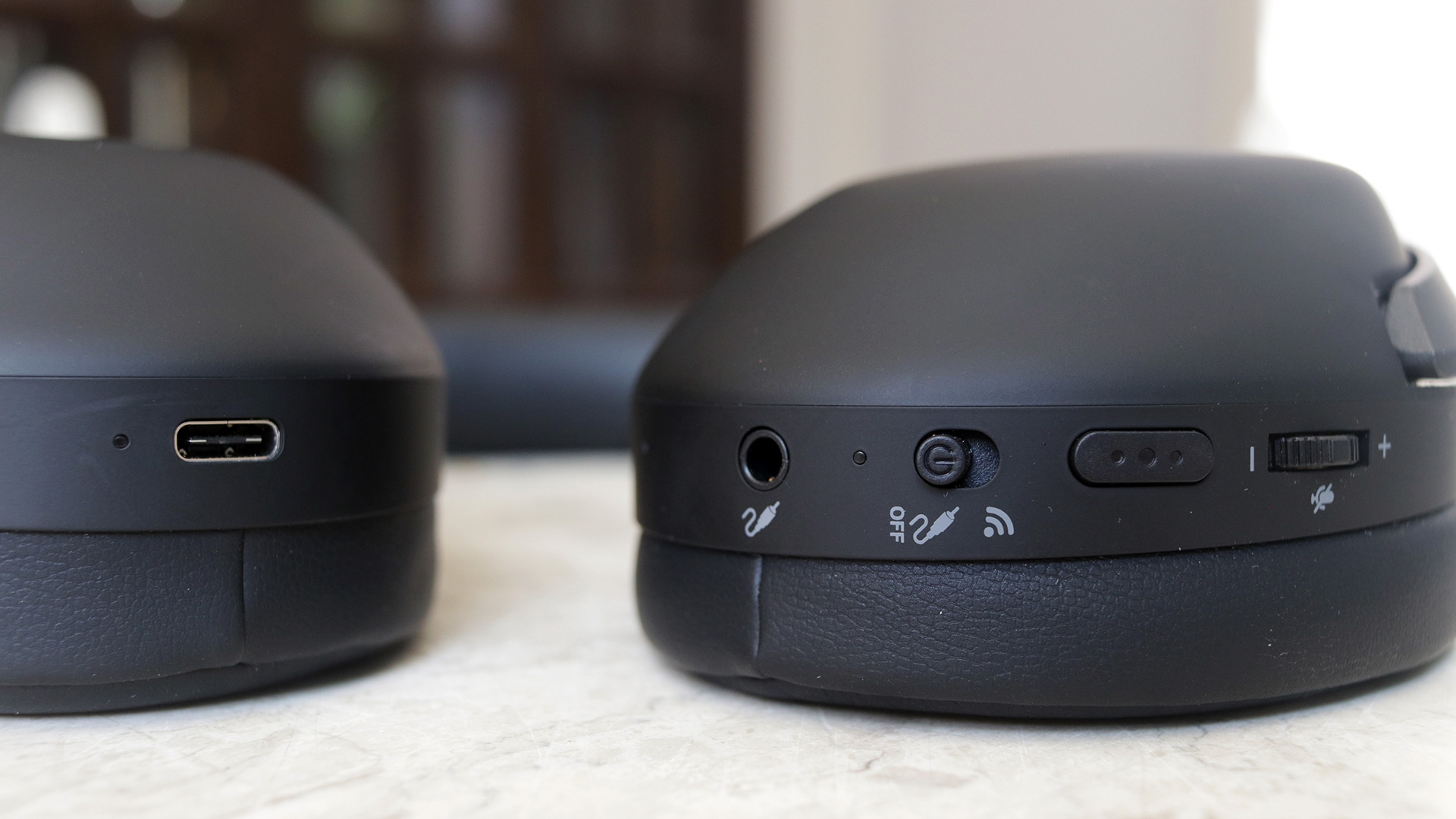 The Strix Go 2.4 features the 40mm variant of the company’s Essence drivers that they’ve been using for many of their recent gaming headsets. The volume of the drivers are suitably loud and the general sound quality is decent as well, with clear highs and mids and warm lows. The soundstage does feel relatively small due to the headset’s closed back design but the imaging is still rather impressive despite of. The sound quality of the Strix Go 2.4 is more than decent enough for gaming but may feel lacking for more discerning listeners. 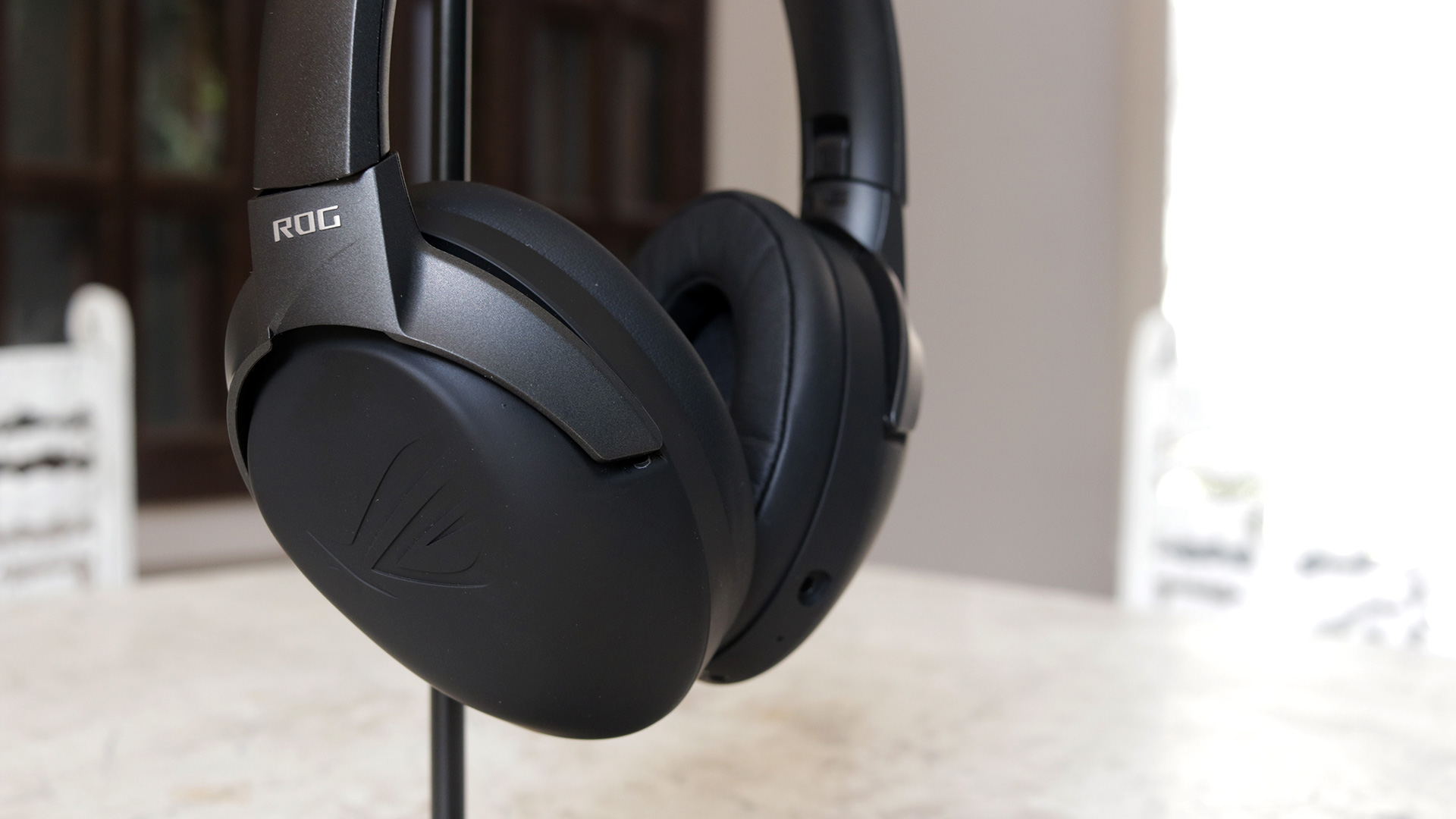 Despite not featuring any active noise cancellation for its drivers, the Strix Go 2.4 still decently blocks out background noise during usage due to its closed back design and leatherette earpads. While it doesn’t completely block out louder sounds, it’s definitely decent enough especially when coupled with the drivers loud output. On the other hand, it also features rather decent sound isolation, with barely any sound leakage even at higher volumes so you won’t be bothering too many people when you use the Strix Go 2.4 on-the-go.

One of the interesting features of the Strix Go 2.4 is that it includes two microphones. Apart from the detachable bi-directional boom microphone, the headset is also equipped with a hidden integrated omni-directional microphone, giving you a discreet microphone option when you’re on-the-go. Both microphones utilize the company’s AI-powered noise cancellation technology that helps eliminate background noise, although the resulting performance is different between each of the microphones due to their design and position. 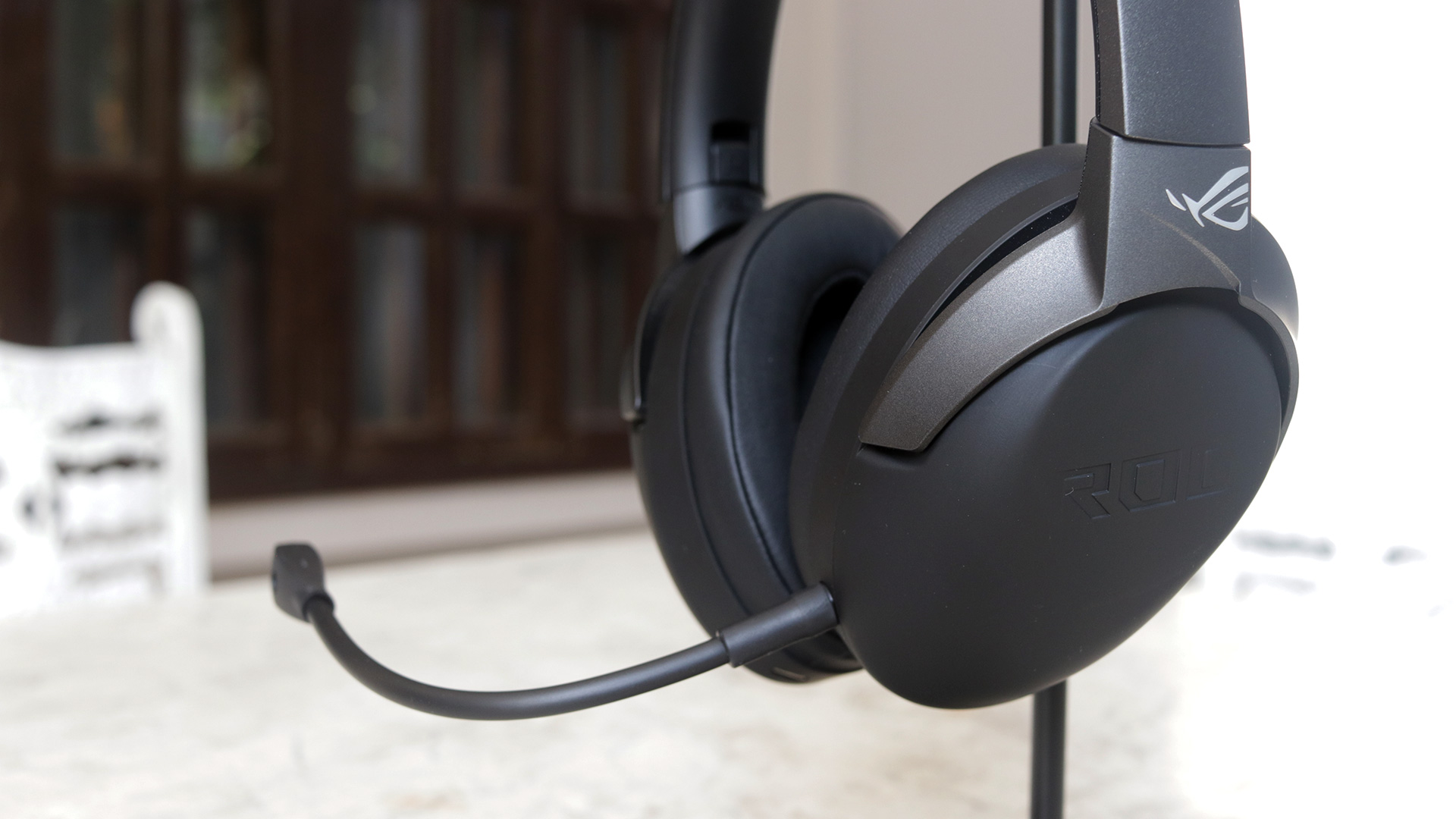 With the AI-powered noise cancellation feature activated, the quality of the boom microphone and integrated microphone are really impressive. Even if the quality does suffer a little with the feature on, it’s still more than clear enough for communicating while you’re gaming and the amount of noise it’s able to block out is remarkable. But if you do find yourself in a situation wherein you don’t need the noise cancellation feature, the sound quality of both microphones become even more impressive.

While ASUS doesn’t specify how large the battery of the Strix Go 2.4 is, we were able to use the headset for almost 3 days with an average of about 6-8 hours of use each day. Charging the headset to full with its included USB cable connected to our desktop PC’s USB 3.0 port took about 3 hours. For those who desperately need it though, plugging in the Strix Go 2.4 for only 15 minutes will give it enough juice for about three hours, which is a pretty nice feature to have, especially for those who tend to forget to charge their devices regularly.

The ASUS ROG Strix Go 2.4 is one of the most versatile wireless gaming headsets we’ve used so far, with its neutral sound signature and the number of ways and devices you can use it with. It’s simple and muted design makes it easily usable in public without looking obnoxious and its included carrying case makes transporting it convenient. While it is undoubtedly one of the more expensive wireless gaming headsets in the market at around PHP 9,000, it somewhat makes up for it in all the number of ways it can be used and the accessories you get with it. If you play games on a Switch, desktop PC, laptop, smartphone, or even a PS4, the Strix Go 2.4 provides a way you can use it with any of these devices, whether via the wireless receiver or 3.5mm cable. The Strix Go 2.4 is definitely one of the better choices for those who want to upgrade to a wireless gaming headset that they plan to use on-the-go and with multiple devices.