When it comes to online gaming, having a wired connection has always been preferred due to its speed and reliability compared to wireless connections or Wi-Fi. But in recent years, with the introduction and development of the AC wireless standard, Wi-Fi has come very close to matching the speed and reliability of wired connections. This means a lot for online gamers who need a fast and consistent connection to keep their playing experience at either an acceptable or optimal level but are limited to only having wireless connections at home.

ASUS has been designing and manufacturing routers for quite a long time now, covering several budget segments from high-end to entry-level. Their latest high-end router, under their gaming-centric Republic of Gamers brand, is the ROG Rapture GT-AC5300 router. The Rapture shares the same design as the company’s mainstream flagship router the RT-AC5300 that they released two years ago, although the Rapture received quite a number of upgrades to its hardware and array of features.

The ROG Rapture, like the RT-AC5300, features a large footprint which measures at least 245 x 245 x 65 mm. That doesn’t include its sloped bezels as well as its gigantic polygonal antennas, of which there are eight all in all. The body of the ROG Rapture comes in a very dark gray with some orange accents on its body and antennas. The top of the router has a square cut out which features the ROG logo and what ASUS calls a Mayan-inspired design. The ROG Rapture is definitely the farthest thing from being discreet and was definitely meant to be proudly displayed so users will need to find some space on their desks or shelves to place the router on. 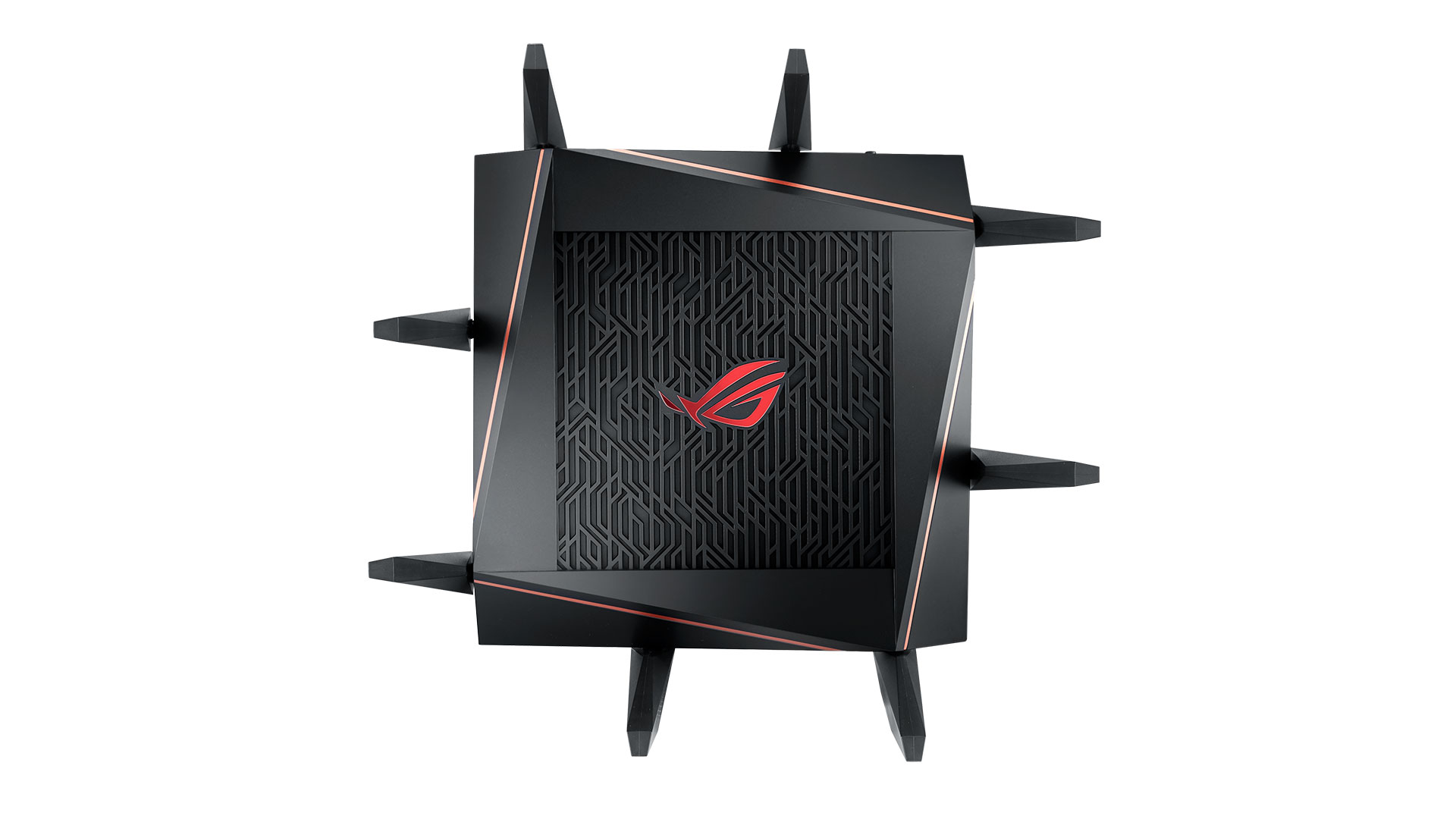 The ROG Rapture’s large body is equipped with connectors for the antennas as well as a set of the usual LED lights in the front, which include indicators for power, the 2.4 GHz wireless band, the 5GHz wireless band, the WAN/internet connection, the LAN connection, and WPS (Wi-FI Protected Setup). The rear of the router hosts the the power button, the power jack, two USB 3.0 ports, the WAN port, eight LAN ports, and the Reset button. Lastly, one side of the router features the on/off buttons for the LEDs, WPS, and WiFi broadcasting.

Going back to the rear of the router, not all of the ROG Rapture’s eight LAN ports are exactly identical. Two of the ports are designated “Gaming Ports” that automatically get priority during instances of heavy network congestion. Two other LAN ports can also be used with the Link Aggregation feature to link the two ports together and boost the connection to 2Gbps for NAS systems. Although, the NAS client will need to support the 802.3ad protocol for this to work. Lastly, one LAN port can be turned into an additional WAN port for Dual WAN setups to host two broadband connections at the same time. 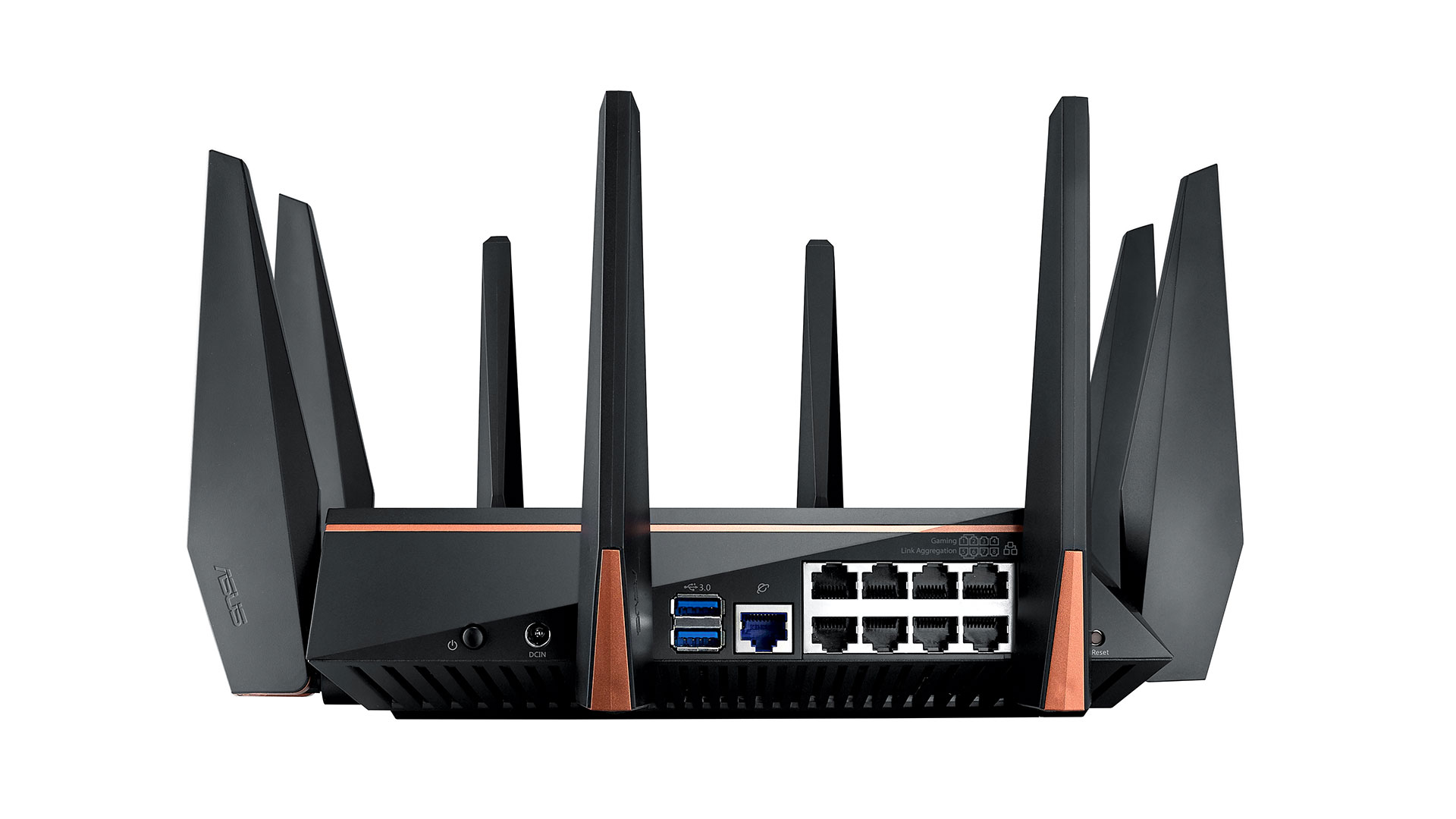 While the ROG Rapture shares its design with the RT-AC5300, it’s insides are very different and are expectedly geared for better performance for gaming purposes. The ROG Rapture features a more powerful processor, more memory, and a larger NAND flash. More specifically, it’s powered by a Broadcom BCM4908 quad-core 1.8GHz SoC which is then paired with 256MB of NAND flash and 1GB of RAM, double that of the RT-AC5300. It also features three BCM4366E radios that are configured to support one 2.4GHz band and two 5GHz bands. The two sets can support up to 1Gbps and 2.16Gbps with 1024QAM, respectively.

Once the router is set up and connected to both a broadband modem and a computer, users can begin configuring it via the very extensive administration user interface. Opening up a browser and accessing the admin UI for the first time will initially run users through a setup wizard which will ask for the users internet connection details as well as the names and passwords of the three available wireless bands. Users will also be asked for a username and password for the admin UI. The router will then run the user through the many features included in the router before showing the summary of the setup wizard and the main admin UI page. 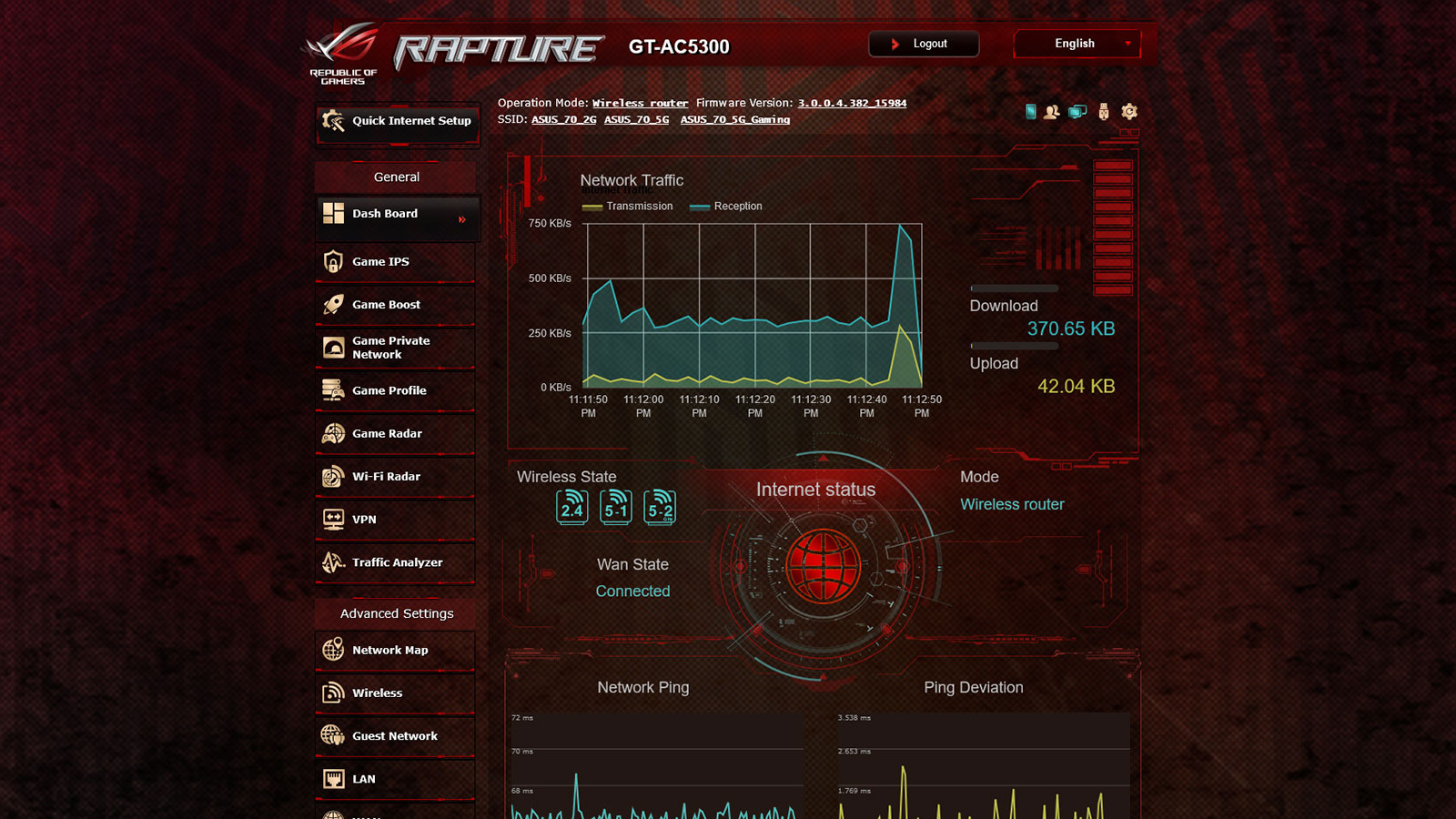 The design of the admin UI of the ROG Rapture is very different from the standard router admin UI ASUS uses for their other routers. The ROG Rapture’s admin UI features a red theme and very modern visuals. In spite of all the options, features, and tools made available in the admin UI, it’s incredibly easy to navigate and find everything. ASUS has also made tooltips for many of the router’s details which makes it easy to familiarize oneself with the all the options, features and tools. Additionally, the admin UI comes in a total of 19 languages, making it quite a versatile device.

We used the ROG Rapture as our main wireless router during our review, which hosted upwards of 10 devices at a time across a 15-meter radius with varying levels of interference via different types of walls. Throughout our usage, the ROG Rapture consistently gave us optimum wireless performance across all our devices (which include desktops, laptops, tablets, and smartphones) through both the 2.4GHz and 5GHz bands coupled with our 50Mbps internet connection. We only began to notice significant drop offs in performance when more than two concrete walls were in the way at a distance of over 15 meters.

The ASUS ROG Rapture GT-AC5300 is undoubtedly the best wireless router we’ve ever used so far. While it is remarkably expensive, with a price tag of over Php20,000.00, the ROG Rapture provides an undoubtedly premium experience. It combines top-of-the-line hardware and performance with a humongous suite of features that are definitely more than most gamers or general users would need. Those looking for a future-proof router they plan on using for more than a few years and are willing to spend quite a bit for it will definitely not be left wanting with the ROG Rapture.