NVIDIA’s RTX line has been one of the company’s most exciting but also most expensive line of graphics cards. So it was a big relief when the company announced the 16 series of GTX graphics cards for those who either can’t afford to jump to RTX or yet to be convinced with the investment. Sitting at the entry-level gaming bracket of the latest 16 series is the GTX 1650, supposedly taking the place of last generation’s GTX 1050. 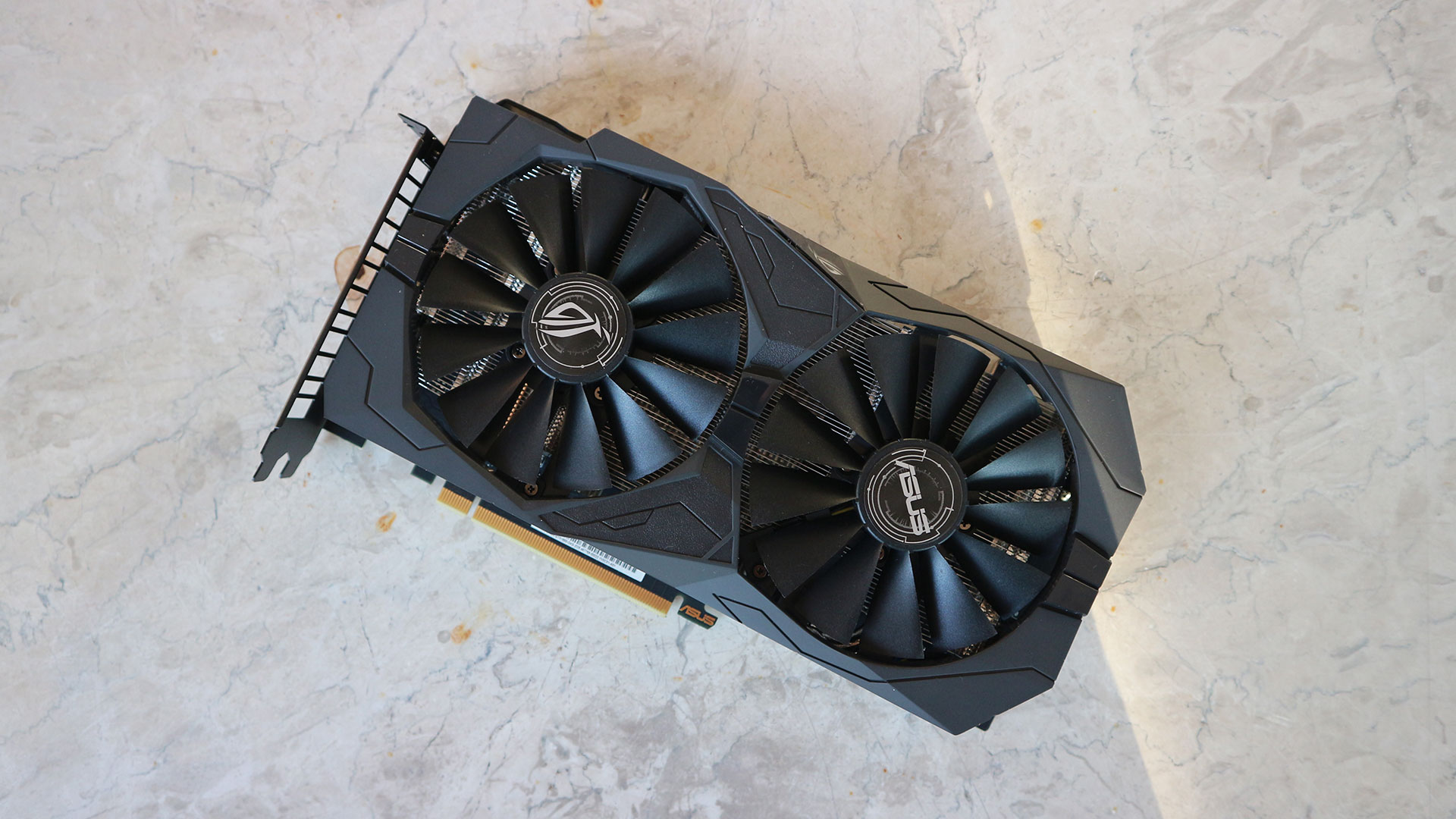 While the GTX 1650 is undoubtedly an entry-level graphics card for gaming and, like the 1660 and 1660 Ti, lacks the RT and Tensor cores of the RTX line, it still comes with most of the same features of the Turing family. It’s equipped with NVIDIA’s smallest Turing chip to date, the TU117, which features 896 CUDA cores, 56 Texture Units, 32 ROPs, and 14 SMs. It also features a 128-bit memory bus width, a bandwidth of 128 GB/s, and 4GB of GDDR5 VRAM. 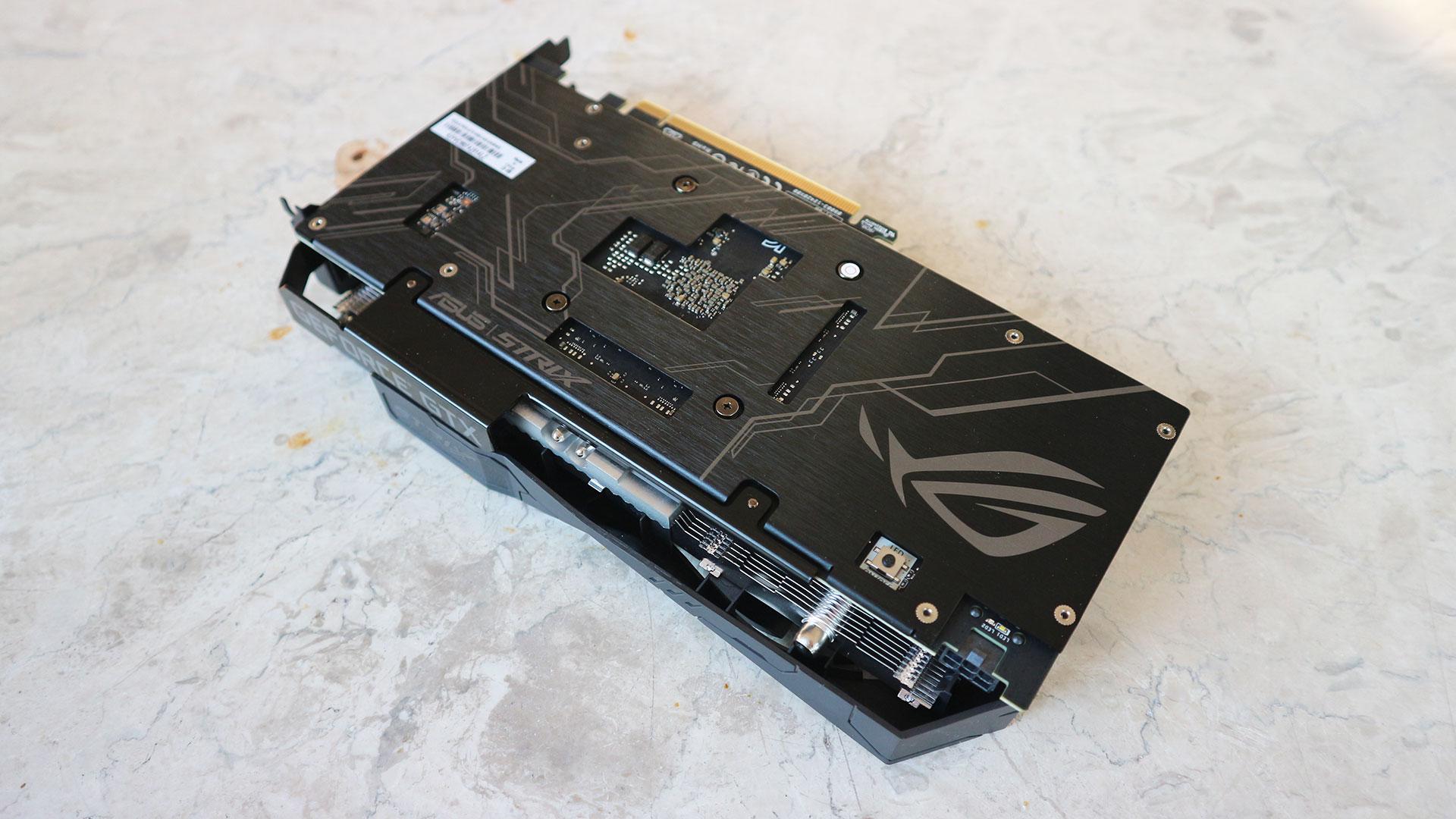 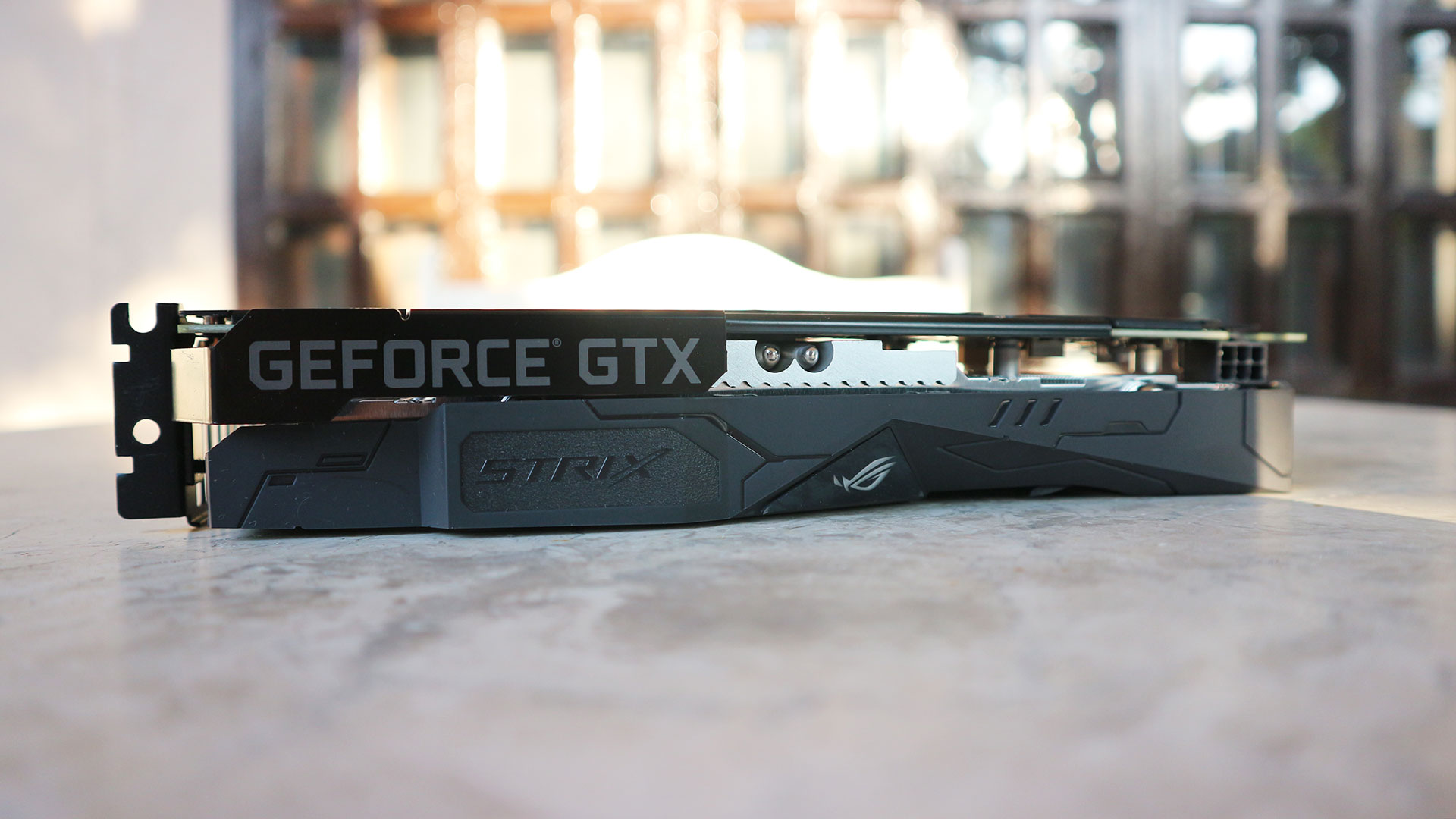 The ASUS GeForce GTX 1650 ROG Strix is the company’s top-end variant of the GTX 1650. It features one of the company’s beefier coolers and while many GTX 1650 cards in the market feature a bare backside, ASUS has included a backplate with the ROG Strix. The card’s shroud and backplate feature the brand’s signature design aesthetic with its aggressive angles, lines, and RGB-lit logo on the shroud.

With its beefy cooler, the GTX 1650 ROG Strix is a relatively larger card, measuring 9.52  x 5 inches and takes up two slots. One of the slots features all of the card’s ports, which include two HDMI 2.0b ports and two DisplayPort 1.4 connectors, while the other slot is dedicated to vents for cooling. Its large cooler also means that the GTX 1650 ROG Strix requires a bit more power so it comes equipped with a single 6-pin power connector. 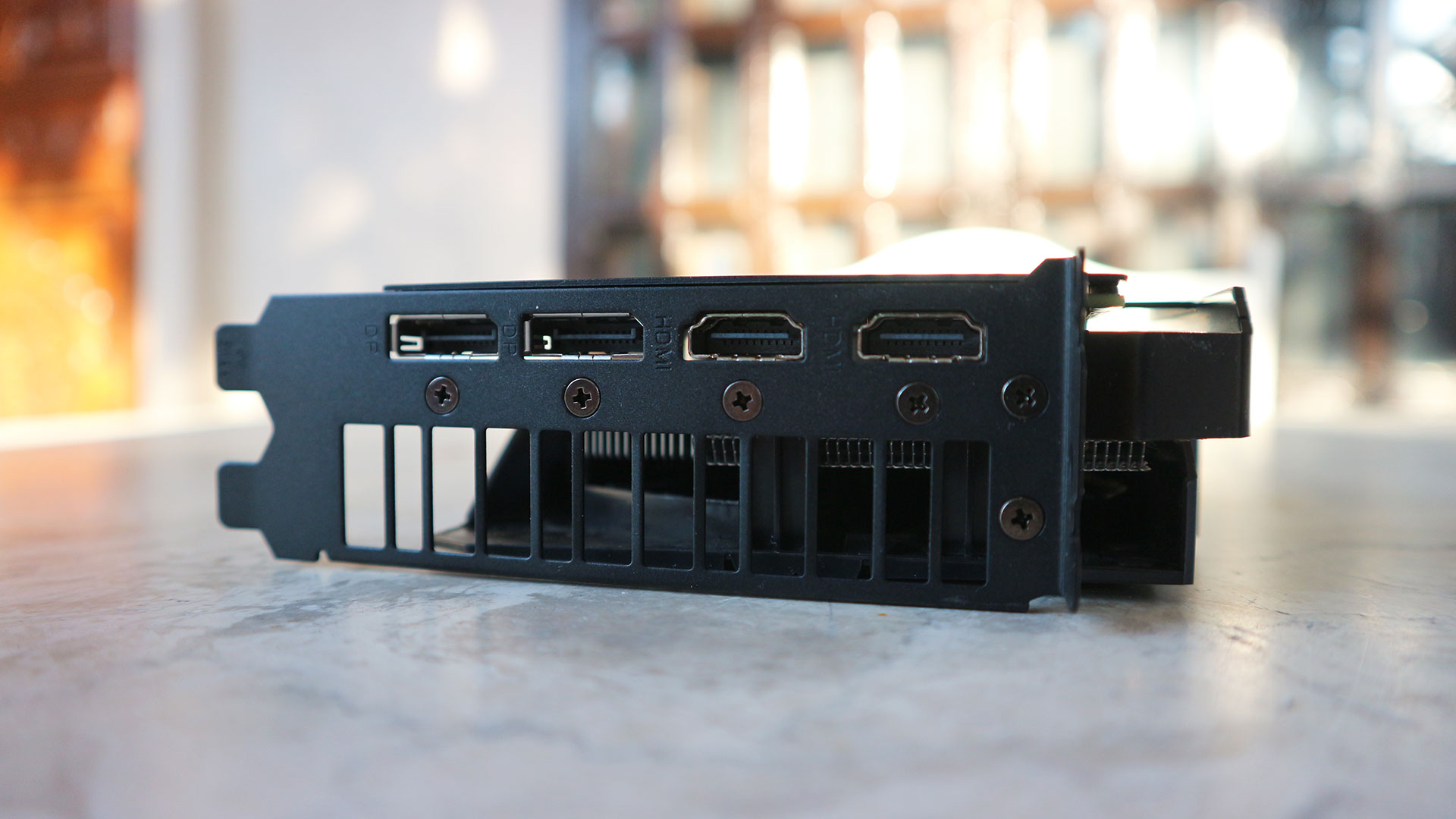 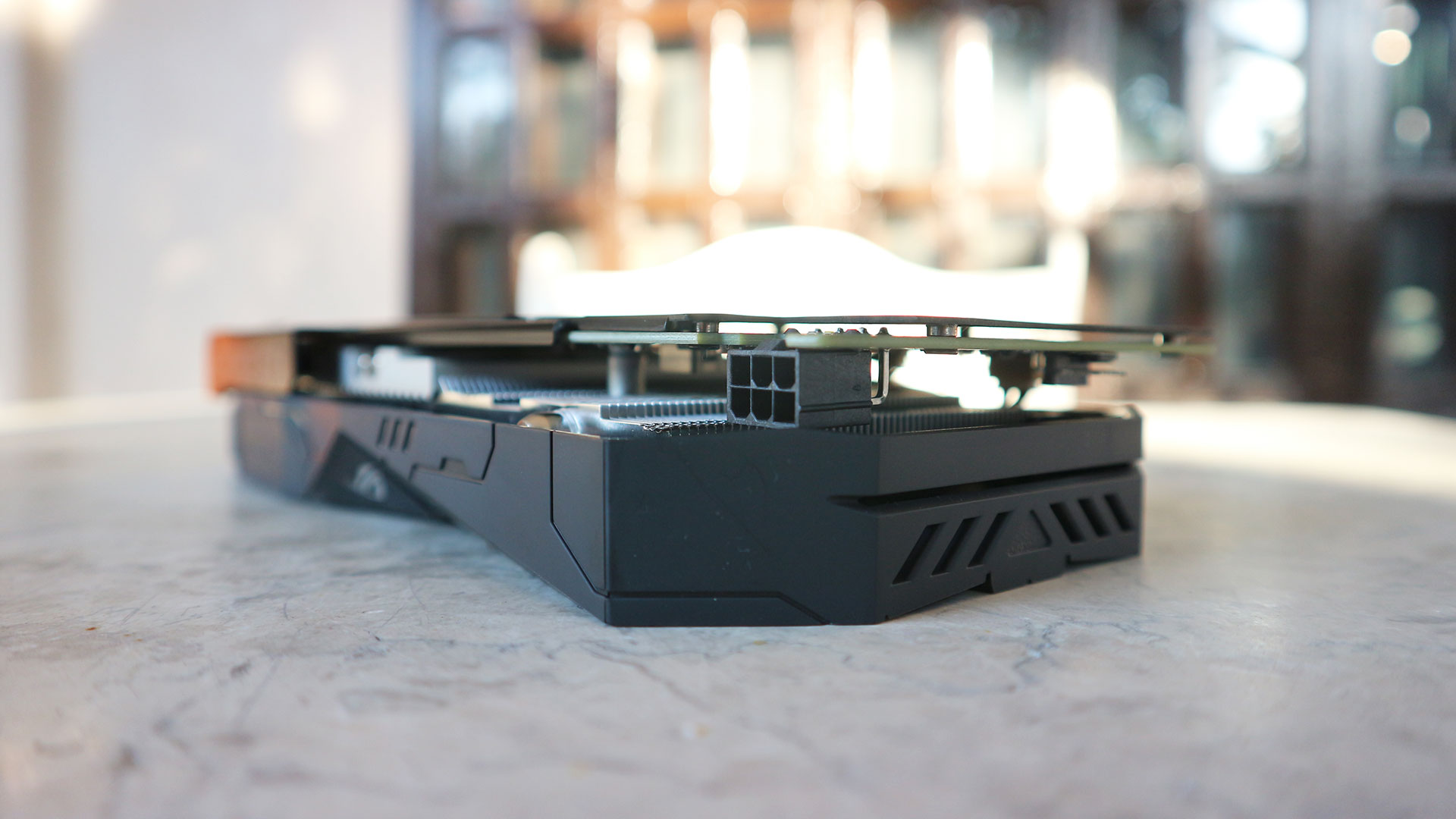 The ROG Strix’s cooler’s two fans come in the company’s supposedly more efficient wing-blade design and under the shroud is a large heatsink with two heatpipes, that stretches throughout the entirety of the shroud. The ROG Strix also features the company’s 0db technology, which turns off the fans when the system is idle, and a fan header to synchronize a case fan with the card’s fans.

Given that the GTX 1650 is meant to be the entry-level model of the Turing family, we didn’t really expect it to blow AAA games out of the water, as its more geared towards those who want to easily play esports titles without breaking the bank. To test out its performance, we ran the card through 3DMark’s Time Spy benchmark and Assassin’s Creed Odyssey’s built-in benchmark tool as well as played one full match each of CS:GO, Dota 2, and Apex Legends.

The GTX 1650 ROG Strix was easily able to handle the esports titles we threw at it and still achieved playable framerates in AC: Odyssey, so reaching 60 fps is easily doable by lowering some of the game’s graphical settings. What we were really impressed by was the card’s thermal performance, beating out all the cards in our current list with a max temperature of only 69°C, which we expect to be even lower during regular use.

With a price tag of only PHP 11,990, the GTX 1650 ROG Strix is one of the pricier variants of the GTX 1650 in the market and while it isn’t as fast as its current closest competitor, the RX 570, which is partly due to the latter having double the VRAM, it easily makes up for it in significantly better thermal performance and power efficiency, thanks in part to its better cooler. The GTX 1650 is a great choice for those looking for a new, future-proof, and affordable graphics card for today’s esports titles and some AAA games and the ROG Strix from ASUS is definitely at the top of the heap.