MANILA, Philippines, June 28, 2021 /PRNewswire/ — YCP Solidiance has recently published a white paper titled ‘The Next Level: The Rise of Esports in the Philippines‘, that emphasizes the country’s potential of exponential esports growth, noting the massive number of active players and their history of enthusiasm towards video games since the early 2000s. 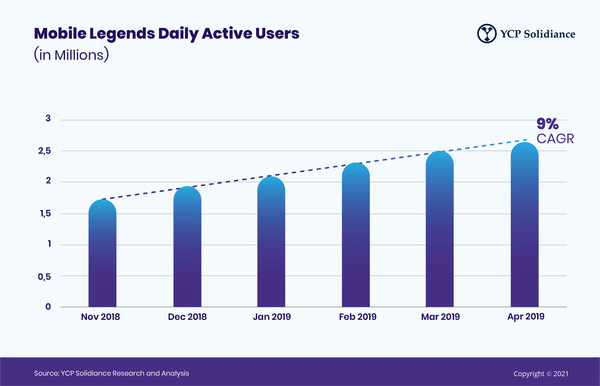 The esports industry in the Philippines currently has over 43 million active gamers, a number growing steadily by 12.9% yearly since 2017. The country’s most played game, Mobile Legends, reached a whopping peak of 2.65 million active users daily (from data by the Google Play store in April 2019), and has shown consistent growth at a CAGR of 9%.

However, game publishers have struggled to generate long-term and sustainable success in professional esports leagues despite the country’s sizable gaming community. The local industry has yet to prove that esports titles hold a lifespan long enough to support professional players’ careers, unlike traditional sports that have a long-proven history of consistent returns and established fan support. In contrast, international leagues such as The Overwatch League and League of Legends: League Championship Series have successfully proven their success in other countries, paving ways for a profitable future for the Philippine esports market.

Awakening the potential of the online game industry in the Philippines requires coordination and substantial effort to ensure that all concerns and potential challenges are addressed. This paper explores the current landscape of Philippine esports and the history of global esports growth, highlighting the different factors and measures to replicate esports’ success in the local realm.

YCP Solidiance is an Asia-focused strategy consulting firm with offices across 17 key Asia-Pacific cities and other regions, advising its extensive client base with a broad spectrum of strategic consultancy areas, identifying breakthrough growth opportunities, and developing execution-ready strategies and roadmaps. For more insights on how to unlock the potential of the Philippines’ esports industry, download our white paper here.