– Tessa’s Here! Log in for a Special Outfit Just for You! 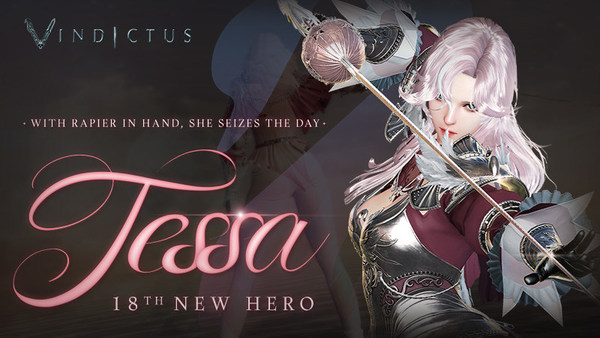 Nexon has announced that Tessa, the 18th hero in Vindictus, is live as of July 13th.

Vindictus is an action MMORPG that launched in 2010, making 2021 its 11th year of service. It features battles that demonstrate impressive action and powerful impact, as well as interesting story and beautiful background music.

Tessa, its 18th hero, is a female character that uses a rapier and gem magic, specializing in quick slashes and stabs. She uses gem magic to leave brands on enemies, then dispels the brands through a counterattack to land a powerful attack. Tessa subduing her enemies with elegant yet swift movements makes her an exciting character to play.

Tessa, based on her swift movements, uses various skills. Spinel Flash is her core skill, with which she dodges forward to evade incoming attacks to perform a hard stab with the Rapier. Garnet Dash is a skill with which she uses gem magic to rapidly approach an enemy or put distance. With Diamond Doublet, Tessa can perform two powerful slash attacks in a row. Such fancy and various skills make Tessa’s gameplay shine even more. You can find more detailed information on Tessa’s gameplay on [Tessa Promotion Page].

Vindictus is holding various events to celebrate Tessa. Through Tessa Package Event, all players who create a Tessa character and reach Lv. 10+ with her during the event receive a permanent special outfit for free. Through Level Up Go! Go! Event, new characters receive support for rapid growth. Also, through the Discord Socialite Event for the [official Vindictus Discord channel], players who join the channel during the event receive the limited outfit part, Whimsical Shark Hairpin.

Furthermore, Vindictus added various content with its latest update. You can learn about the details from the [full patch notes].