SEOUL, South Korea, Aug. 24, 2022 /PRNewswire/ — Knight-errant and magical master of joust Latiya is now available to play in Nexon’s MMORPG Vindictus, earning her place as the 21st hero in the game. Latiya grew up in a dangerous jungle and became the world’s greatest hunter, yet her desire to become a knight overtook that ambition. With her large lance and mystic chain hook, she hurtles through the battlefield to joust against her adversaries without a need for a horse. 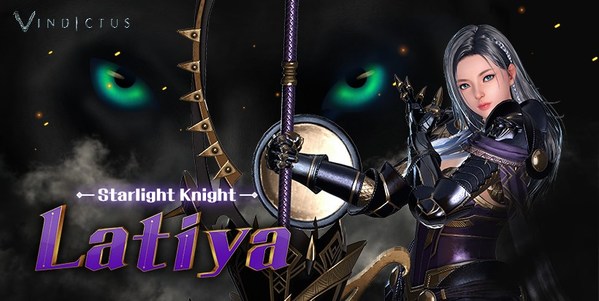 Her exclusive weapon, the lance, embodies her love of knights. She carved her first one from wood. When she later discovered friendly jousting competitions around the kingdom of Delshire, Latiya was already well-versed in carrying her lance. She now wields the metal lance of Roland, a knight who saved her as a child. Her lance attack strikes even more solidly against those she marked with explosive results.

Latiya is not only strong enough to swing lances around with one hand, but she can also summon the magical Kuja chain hook with the other. The Kuja chain hook from her tribe allows her to quickly navigate the environment to both elude and chase down prey. It allows Latiya to walk the path between a merciful defender and a merciless hunter.

Latiya’s armor sets include "Eusi Kuja" and "Stout Heart." "Eusi Kuja" is the name of her tribe, the Black Claws, and is designed to combine the best techniques of dodging and deflecting damage. Just like how Latiya herself learned to mix the best traditions of hunters and knights. The tribal detailing on the more armored elements further compliments this bridging of two worlds into a unique and beautiful ensemble.

Stout Heart, named after her sister Lua’s suggestion, is a set of medieval full plate armor. The solid, interlocking plates with unique black leopard skin had jousting fans cheering for her as the "Panther Knight" whenever they watched her compete. Latiya’s friend Marie further decorated the armor with symbols of Latiya’s tribe.

As a piercing starlight knight, Latiya has special skills to defeat her enemies. Her first skill, "Lion’s Rage" imbues her lance with magic and performs a swing, an upward slash and finally a thrust. Additional inputs after using the skill can alter the attacks that combo out from the skill. "Snake Coil" unleashes the Kuja chain hook to attack nearby prey. This covers a large area and landing a successful hit can restore stamina with Kuja’s Strength.

"Light of Kuja" is a counterattack that can follow certain other moves, this allows Latiya to both dodge attacks and land some of her own at the same time. Successfully striking someone can lead to a further strike combo. Evading an enemy’s strike at the precise moment can also create an even more powerful combo attack.

Finally, "Panther Pounce" unleashes a flurry of furious strikes, with the Kuja and the lance working in harmony. If Latiya hits her first strike onto the enemy, she has a chance to instantly kill them.

Latiya’s Celebratory Package Event is now open until Tuesday, Sept. 20 to welcome Latiya to Vindictus. Items available include "Latiya’s Outfit Set Destiny Box," "Title: The First Latiya," and "Unlimited Inner Armor Pass (30 days)" filled with all kinds of outfits for Latiya to wear. Details on these event outfits and stats can be found here.

More information about Latiya’s debut in Vindictus can be found on the official website.

Vindictus is an action MMORPG that launched in 2010, making 2022 its twelfth year of service. The game takes place in a desolate land teeming with wild beasts and features fast-paced, brutal combat which gives players the ability to weaponize objects in their environment.

About NEXON Co. Ltd. NEXON Co., Ltd. ("Nexon") (3659.TO) is a worldwide leader in free-to-play online and mobile games. Founded in Korea in 1994, Nexon developed one of the world’s first graphics-based massively multiplayer online games. Nexon also pioneered the concept of microtransactions and the free-to-play business model, setting a new standard in which play is free, and users have the option to purchase in-game items to enhance their experience. Nexon currently services nearly 100 titles in more than 190 countries. The Company is headquartered in Tokyo, Japan and its shares are listed on the Tokyo Stock Exchange.