GUANGZHOU, China, Feb. 26, 2022 /PRNewswire/ — The fact that Puzzles & Survival by 37GAMES won an award for Best Gameplay Innovation at the Sensor Tower APAC Awards 2021 on February 18, 2022, merely rubber stamps the phenomenal success of this zombie-themed match-three game. The fact that it also recently topped 38 million downloads worldwide and still ranks as one of the top-grossing games in the U.S., Europe, and Japan a whole year after its release doesn’t seem particularly surprising considering how many times it has been recommended by both the App Store and Google Play. 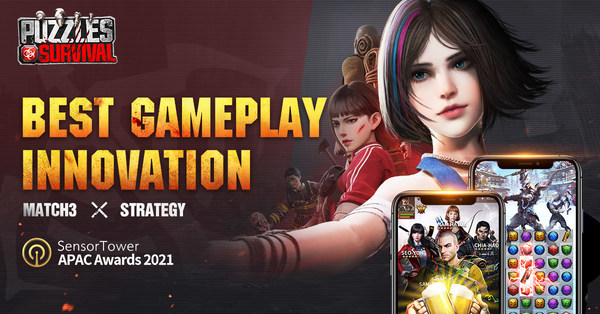 Though it is hard to pin down the precise reasons for the cementing of Puzzles and Survival’s continued success on Android and iOS, much can be said for the game’s creative fusion of classic match-3 and wargame strategy gameplay. These exciting gameplay elements, coupled with the post-apocalyptic wasteland backdrop against which this all transpires, have rightfully earned significant acclaim from players and gaming content creators alike.

Furthermore, the Puzzles & Survival team’s continual attempts to collect feedback from the game’s global user base have helped provide the polished, unique, and rewarding gaming they have become accustomed to. Perhaps most notably, the game’s wide range of collaboration and crossover events, namely the Godzilla and Glacial Mine Exploration crossover event, as well as the Locust Hunt and Multispecies Update events launched in collaboration with Discovery, resulted from the creators’ persistent desire to make the most enriching and enthralling gaming experience possible.

These plaudits, acclaim, and popularity alike have only strengthened the creator’s resolve and gratitude to the game’s loyal user base, to whom its success will forever be indebted, as well as its continued growth. With that much in mind, a gift code, [PNSBEST], has been made available within the game, and an exciting new crossover event will be made available very soon, so make sure to keep an eye out, or download the game today if players haven’t done so already.