GUANGZHOU, China, Aug. 16, 2021 /PRNewswire/ — On August 3rd, the Puzzles & Survival team was invited to Google’s Think Games event to share their knowledge and expertise in "pioneering in hybrid game design". Puzzles & Survival is a post-apocalyptic Match-3 mobile strategy game published by 37GAMES. With the game’s innovative gameplay that combines Match-3 mechanics with city-building and strategic war elements, Puzzles & Survival has ranked among several best-selling lists on the Google Play Store and App Store in many regions. The number of downloads worldwide has exceeded 25 million, and the game has been recommended by Google Play many times. 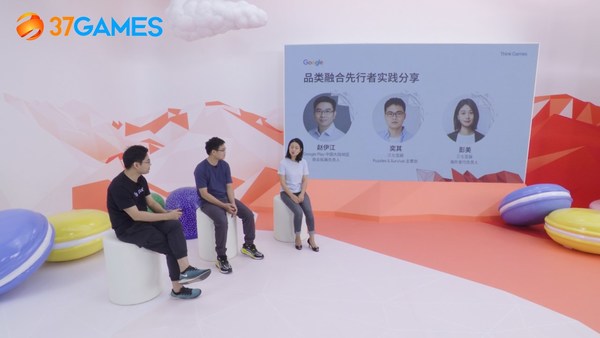 In the interview, Sally Peng, Vice President of 37GAMES, and Yi Qi, the chief designer of Puzzles & Survival, share behind-the-scenes stories of the development of the game.

Yi Qi: "Most mid-core to hardcore mobile strategy games rely on gameplay that’s featured during the middle and late stages of the game. Building up from the early stages of a strategy game is relatively boring. The insertion of Match-3 mechanics solves this ‘early stage boredom’ issue. Match-3 is casual enough to bring in a lot of users. It also has enough strategic elements to keep users engaged and enhance their sense of growth as they level up. Match-3 perfectly balances the early stage boredom of a lot of mobile strategy games. The casual game market is also pretty big, especially Match-3. There are already many successful Match-3 games on the market for people to model after."

Yi Qi: "The growth and development of the player is bound to the strategic gameplay of Puzzles & Survival. If players continue to be engaged in Match-3 content, they will inevitably be exposed to more strategic gameplay in the later stages of the game. The R&D team streamlined the alliance functions that has helped players smoothly transition from Match-3 content to strategic war game elements of Puzzles & Survival. As players join alliances, they become more engaged in alliance content and will start interacting with other players steadily. This solution is perfect for guiding casual players to becoming more hardcore strategy players."

Yi Qi: "Puzzles & Survival focuses on Match-3 gameplay during the early and middle stages of the game, but it’s not just simple puzzle-solving gameplay. There’s a growth and leveling-up system for your heroes. Therefore, the game is modeled more like an RPG card game. The in-game purchase rates for card RPGs have always been higher than mobile strategy games. Of course, the combination of the two also resulted in high in-game purchase rates."

Sally Peng: "With our previous game Puzzles & Conquest, we looked at our data and verified that the game design, operations, and overall product was profitable but our user acquisition costs were too high. For Puzzles & Survival, we made the game zombie-themed and enlarged the game design. Other successful post-apocalyptic and zombie games on the market helped us verify this idea (the target audience is large and strategic gameplay is easily integrated). Also at the same time, Google supported us with their data analytics, which strengthened our confidence in choosing to set the game in a zombie world."

Sally Peng: "Our creative team is very professional. Everyone is always coming up with great ideas and these ideas are constantly improved until they are fully-fledged scripts. We always try to use actual gameplay in our game as the creative focus for our advertising. We also give feedback and communicate with our R&D team of what the creative team is doing and they integrate everything back into the game. Our tutorial for Puzzles & Survival is a successful example. "Rescuing the girlfriend" is an industry standard when it comes to advertising content. Putting it in the game’s tutorial enhances the gaming experience and causes a feedback loop for our advertisements."

In recent years, 37GAMES moved more rapidly towards globalization and diversification than ever before. With the successful release of Puzzles & Survival, 37GAMES has reached another milestone on its path towards expand its reach in the overseas market. Sources say that "there are more than 50 upcoming projects and high-quality games set to release one after another, and that the company’s production schedule is full." 37GAMES is striving to be a top-tier leader in the mobile gaming industry within the near future.