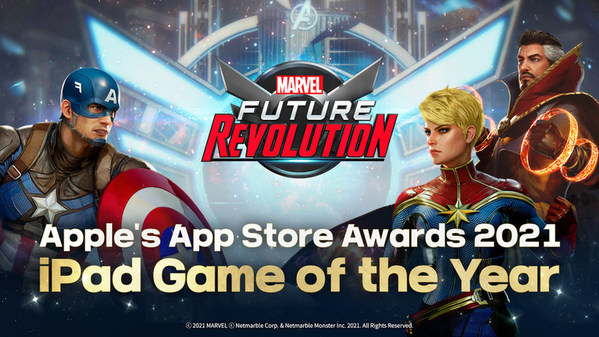 "To be recognized with this prestigious award is immensely humbling, as we really strove to make a first-of-its-kind game for Marvel that connected players from all over the world. We were up against apps and games judged on delivering exceptional quality, cutting-edge design and intuitive usability, as well as advanced application of Apple’s unique technologies, making this especially rewarding," said Joe Lee, Executive Producer at Netmarble. "Thanks to our talented team of developers, our highly collaborative relationship with Marvel, and the long hours put in by our entire team at Netmarble, we were able to bring our shared vision to life. We can’t wait to show you what’s in store for MARVEL Future Revolution in 2022."

Netmarble and Marvel recently showcased a first look at Magik, MARVEL Future Revolution‘s upcoming ninth playable Super Hero, officially revealing that her world premiere would be on December 15, 2021. More details on this new character and other upcoming content will be announced in the near future.

Since launching globally in August 2021, MARVEL Future Revolution has been recognized by Apple as the 2021 ‘iPad Game of the Year,’ by Google Play as the ‘Best Competitive Game’ of 2021, and by The Game Awards – receiving a nomination for ‘Best Mobile Game’ in 2021.

ABOUT MARVEL Future Revolution
MARVEL Future Revolution is Marvel’s award-winning open world action RPG for mobile devices, featuring AAA-quality, 3D graphics in an original, high-stakes, adventure-driven storyline by well-known Marvel writer Marc Sumerak (Spider-Man, the Avengers and more). After numerous Earths converge in the multiverse to form an entirely new ‘Primary Earth’, players will join the newly formed ‘Omega Flight’ Super Hero team to serve as the last line of defense against a never-ending series of threats and nefarious Super Villains. With eight playable characters outfitted in iconic costumes from throughout the Marvel Universe, along with more than 400 million costume combinations per hero to choose from, players can meticulously personalize their ideal Super Heroes look while exploring archetypal locations in an open world of massive proportions.

About Netmarble Corporation
Established in Korea in 2000, Netmarble Corporation is a top developer and publisher pushing the boundaries of the mobile gaming experience with highly innovative games including Seven Knights 2, MARVEL Future Revolution, Ni no Kuni: Cross Worlds, Lineage 2: Revolution, The Seven Deadly Sins: Grand Cross, Blade & Soul Revolution and MARVEL Future Fight. As a parent company of Kabam and SpinX Games, and a major shareholder of Jam City and HYBE (formerly Big Hit Entertainment), Netmarble strives to entertain audiences around the world with a variety of mobile games based on its powerful franchises and collaborations with IP holders worldwide. More information can be found at http://company.netmarble.com

About Marvel Entertainment
Marvel Entertainment, LLC, a wholly-owned subsidiary of The Walt Disney Company, is one of the world’s most prominent character-based entertainment companies, built on a proven library of more than 8,000 characters featured in a variety of media for over eighty years. Marvel utilizes its character franchises in entertainment, licensing, publishing, games, and digital media.
For more information visit marvel.com. © 2021 MARVEL