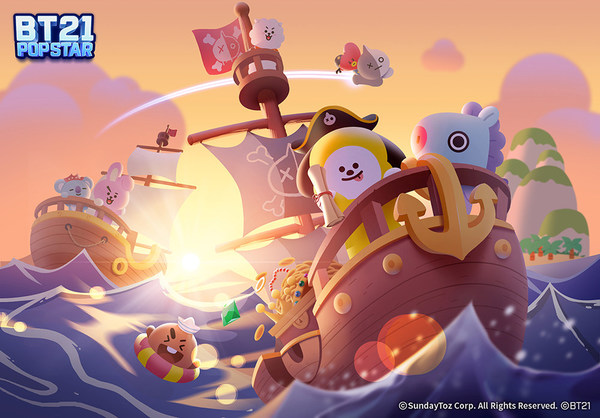 ‘BT21 POP STAR’ is a mash-up puzzle game where players not only can beat intensive levels but also collect and raise ‘BT21’ characters: KOYA, RJ, SHOOKY, MANG, CHIMMY, TATA, COOKY, and VAN. Players can also use each character’s special skills to complete levels and watch various reactions and dialogues based on the game story.

Also, the game gives players benefits by collecting puzzle pieces to completing it and the fairy-tale-like story of the ‘BT21’ characters. The original art of ‘BT21’ that can be found only in ‘BT21 POP STAR’ will provide unique benefits in the collection. Players can enjoy additional contents, including ‘CROWN STARS,’ a real-time puzzle match with 10 players, and ‘CLUB,’ a social feature to communicate with friends and give Lives back and forth.

"’BT21 POP STAR’ holds the sensitivity of ‘BT21’ franchise for both story and puzzle. Having these two as the main contents, players will be able to enjoy ‘BT21 POP STAR’ with various contents," said Hyunwoo Lee, the lead producer of the game. "We will provide the best service that our players from Asia can enjoy in ‘BT21 POP STAR’."

To promote ‘BT21 POP STAR’s release, various events will be held for enthusiasts. From March 16 to April 16, players can participate in the ‘Release Event,’ where users can collect points based on their remaining moves to get various rewards. Also, there will be other events opening once every week, including ‘Star Collecting Event’ where players can collect stars and complete with other players and ‘Balloon Up Event,’ where players get boosters at the start of a level after a winning strike. Additionally, a 7days special ‘Login Event’ will be held from March 24 to April 24, providing special login rewards.