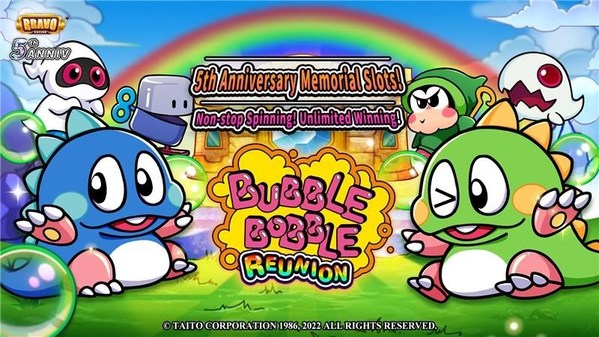 The game is designed with a high winning rate, and greater chances for repeat wins, allowing players to experience the thrill of winning the jackpot through the game interface. For its anniversary launch, players in the US will be able to win up to 10,000 diamonds worth USD 350 in game rewards. The daily lucky draws are open to every player logging in to the platform until April 12th.

"I am pleased that Bubble Bobble can participate in the 5th-anniversary celebration of slot games," said Masakazu Suzuki, Director, and Executive Officer or Taito. "Since the first collaboration, the two teams have always adhered to the principle of providing players with the best experience. Since then, we have brought out many wonderful sparks, and it has achieved a game sequel that both teams are delighted with."

This Next-Gen reunion of the popular game continues the widely successful initial collaboration between Bravo Casino and Taito. Last year, the company launched the world’s only "Bubble Bobble" slot machine, with overwhelming success in its home turf Taiwan and in Hong Kong, Macau, Singapore, Malaysia, and the United States.

The surge in mobile gaming during the COVID-19 pandemic, which hit over USD70 billion in value last year in Asia alone, accelerated Bubble Bobble’s growth, breaking the one million download mark in 2021 and achieving five million downloads globally on its fifth anniversary.

Gu Gangwei, Chairman of Bravo Casino said, "As demand continues to grow, Bubble Bobble: Reunion not only follows the rich gameplay of the first game, but it goes beyond. It has been recommended by Google Play for its quality, interphase, and popularity. We are confident that this sequel will be loved by players wanting to relive their childhood memories through this classic game while experiencing the thrill of slot machine games."

Bubble Bobble, first released in 1986 as a platform arcade game, has constantly been listed as one of the greatest video games of all time by various publications. Since then, the game has been widely ported, appearing on multiple platforms such as computers and consoles. The game’s slot machine app version was first released by Bravo Casino and has been captivating and engaging players globally.

Bravo Casino is a global gaming platform by Megata LTD, Taiwan’s leading social casino gaming provider, hybrid developer and operator. Bravo Casino redefines the social aspect of casino games by combining the latest slot machine trends from the casino floor with time-limited special events, such as tournaments and missions, to expand the age range of its player base and ensure ongoing player engagement.

Bubble Bobble is an action game planned, developed, and released by TAITO Corporation in 1986. The game centers around Bubby and Bobby, two boys cursed by a wizard and turned into bubble-blowing dragons. On a quest to rescue kidnapped partners, players brave all 100 floors of the cave of monsters, defeating enemies by catching them in bubbles and bursting them.

TAITO Corporation is the exclusive owner of the global intellectual property rights, including copyrights and trademarks, for Bubble Bobble and its characters. It takes an active role regarding any Bubble Bobble-related enterprises.