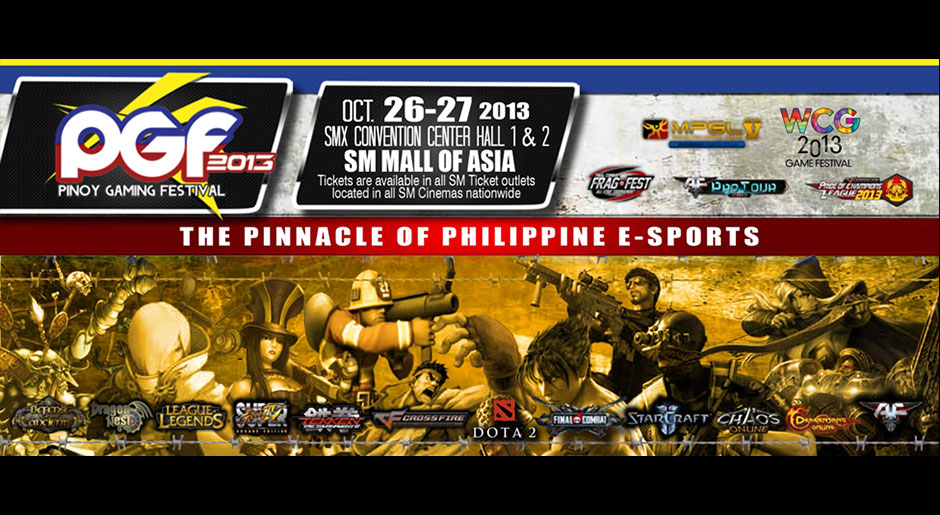 Update (Oct. 17): RaptureGaming, the organizers of the PGF, have announced that the event will no longer be at the SMX Convention Center but instead will be at the World Trade Center (Halls B & C). Tickets may still be purchased through SM Ticket Outlets and tickets already purchased are still valid and will be honored.

This year’s Pinoy Gaming Festival, one of the Philippine’s biggest e-sports events, is happening in just a few weeks on October 26 – 27, 2013 at the World Trade Center Halls B & C in Manila, Philippines.

The organizer, RapturePH, has confirmed ten games that will be featured during the event – Assault Fire, Crossfire, Dota 1, Dota 2, Dragon Nest, Final Combat, League of Legends, Starcraft 2: Heart of the Swarm, Super Street Fighter 4: Arcade Edition, and Tekken Tag Tournament 2. And along with the main events, PGF 2013 will also play host to the WCG 2013 Philippine National Finals (for Assault Fire, Crossfire, Starcraft 2: Heart of the Swarm, and Super Street Fighter 4) and the Mineski Pro Gaming League Philippine Finals.

RapturePH also announced that there’ll also be a cosplay competition, PC rig building/customizing, and lots of freebies and prizes during the event.

Tickets to the Pinoy Gaming Festival are priced at Php160.00 each and are now available through SM Ticket Outlets at SM Cinemas nationwide. RapturePH has announced though that tickets are limited (4000 tickets per event day) so get yours as early as possible so you don’t miss out.