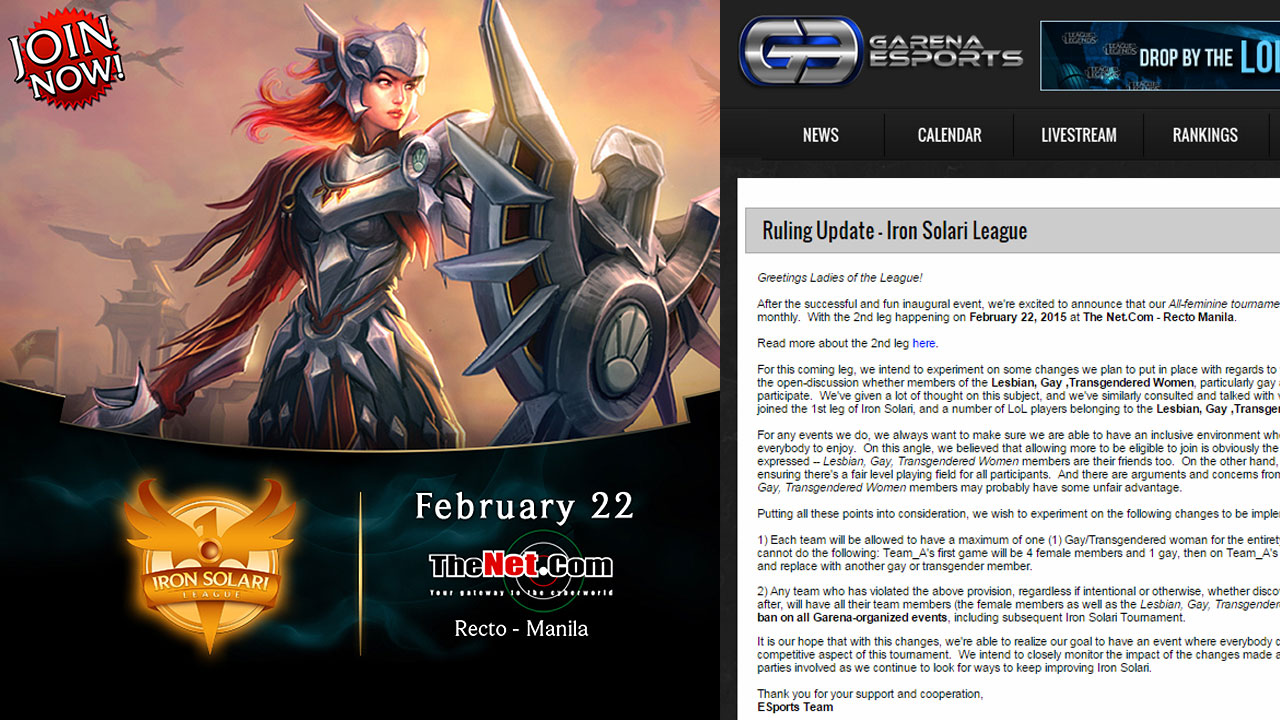 Apparently members of the LGBT community possess some special gaming voodoo that may or may not give them an unfair advantage in eSports tournaments if a new ruling for the Iron Solari League is to be believed.

The Iron Solari League is a monthly “all-feminine” League of Legends tournament organized by Garena Philippines and in a just published article on the Garena eSports website, the organizers announced that in the 2nd leg of the tournament which is happening in a few weeks, teams may now include a member of the LGBT community into their team.

According to Garena Philippines, the new ruling is an “experiment” and a move to be more inclusive saying, “We’ve given a lot of thought on this subject, and we’ve similarly consulted and talked with various parties including the female teams who joined the 1st leg of Iron Solari, and a number of LoL players belonging to the Lesbian, Gay, Transgendered Women community”.

While at first glance that may seem all fine and dandy, the actual conditions of the ruling and the reason behind them are what comes out as questionable.

Here is the first condition of the new ruling copied word for word:

“Each team will be allowed to have a maximum of one (1) Gay/Transgendered woman for the entirety of the tournament day.   Therefore, teams cannot do the following: Team_A’s first game will be 4 female members and 1 gay, then on Team_A’s second game, they will have 4 female members and replace with another gay or transgender member.

So why is Garena only allowing a maximum of ONE member of the LGBT community on each team? Here’s why:

“On the other hand, for any competitions, we seriously look at ensuring there’s a fair level playing field for all participants.  And there are arguments and concerns from other participants [sic] who disputes that Lesbian, Gay, Transgendered Women members may probably have some unfair advantage.”

So, according to Garena, members of the LGBT community ‘probably have [sic] some unfair advantage’ over the female competitors in the tournament. Apparently, Garena believes that being gay, lesbian, bi, or transgender endows you with special magical powers that make you a better gamer.

The second condition for the new ruling only makes this more alarming:

“Any team who has violated the above provision, regardless if intentional or otherwise, whether discovered during the day of the event or sometime after, will have all their team members (the female members as well as the Lesbian, Gay, Transgendered women member) sanctioned with a 1-year ban on all Garena-organized events, including subsequent Iron Solari [sic] Tournament.”

In an attempt to be more inclusive, Garena may have instead proven itself to be more ignorant and backwards. We hope the organizers pull and re-think this ruling and come out with another ruling that’s truly more accepting towards members of the LGBT community. This goes to show how far our culture has to go to be become genuinely progressive and inclusive.

Note: We’ve posted a screenshot of the original article from the Garena Philippines eSports website below. 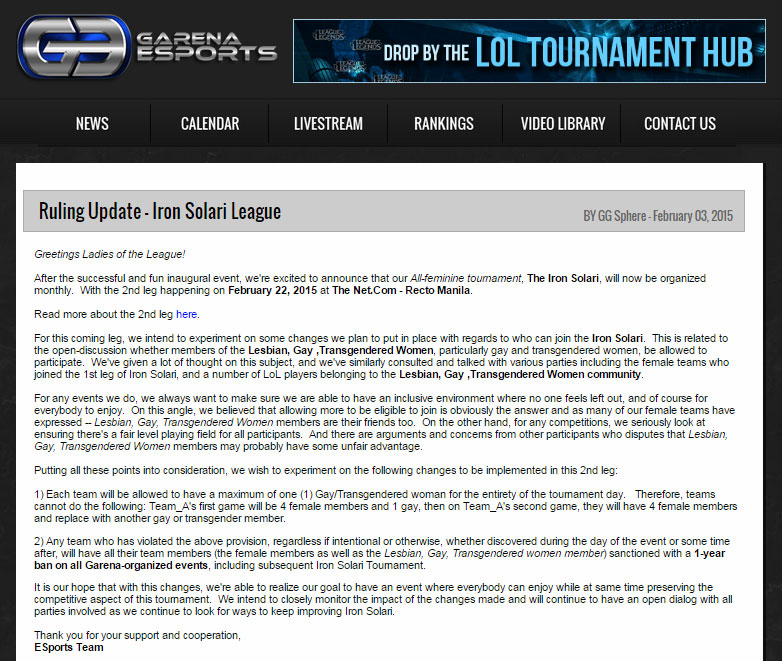